With thousands of Metroidvanias in the market, every developer tries to stand out with their unique look or mechanics. Frontier Hunter: Erza’s wheel of fortune accomplishes this in many ways. This game is the second in the series by IceSitruuna, comprised of a four-person studio from Chongqing; they are both the publisher and the developer. Frontier Hunter departs from the roguelike of the first game and solely focuses on the Metroidvania aspect of the game but still retains the main character from the previous game, Erza. Those who have tried the game from steam’s Next Fest have an idea about the game, and it was one of the best indie games that was displayed at the last one we had. Our story starts with Erza doing a live stream on her ship that she is the Vice-captain of. After her stream ends rather embarrassingly from her father crashing in, she is called through the ship’s intercom by the captain. After this cutscene, we can take control of Erza herself. 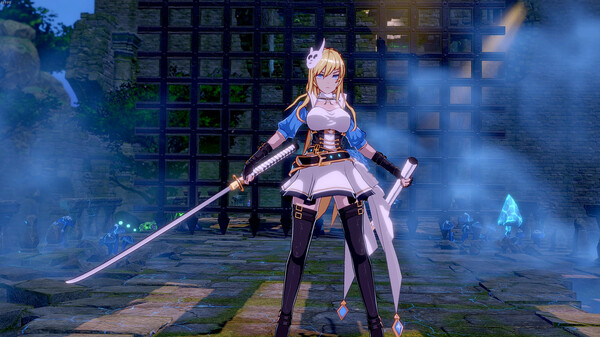 The controls are solid enough for a Metroidvania. There are two weapon buttons, two sub-weapon-like buttons for your magics, a dash button, and a quick item menu button where you can use potions to heal and replenish your MP. Early in the game, you receive another character to play, Ciara. Her move set is substantially different from Erza as her primary weapon of choice, in the beginning, is a mini-gun that will do devastating damage from afar while stun-locking most enemies, but her bullets are not endless. How it works is Ciara has creation magic to slowly replenish the bullets passively as her gun is not in use. Her other attacks are melee-based kicks that she can acrobatically juggle her enemies. The last person is also a short-range fighter that uses daggers and gloved weapons but focuses more on quick multi-hit combos. Each character has three different weapon choices with each of their distinct advantages and disadvantages. For example, Erza has a rapier with quick jabs that does good damage, but it’s her shortest weapon. 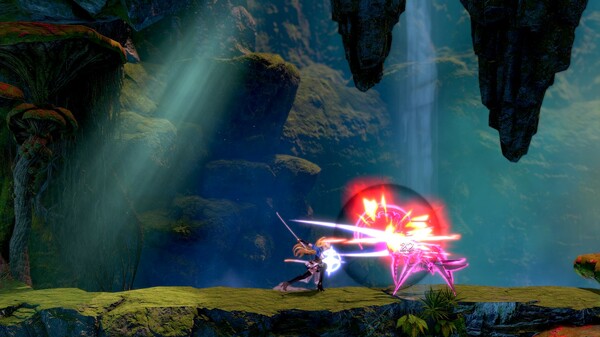 In contrast, her katana is a good all arounder. On the upside, with these choices, the player can switch the characters mid-fight to switch up tactics for maximum efficiency. The other pieces of equipment are your standard armor, two artifacts that act as sub-weapon magics, and two accessories. Each piece of equipment has slots inside them, like a grid in which the player can insert cores to strengthen their abilities and even give new ones like immunities, elemental damage, and conditions. If the player wants to expand on those slots, they will have to expend certain items to open them up to use the bigger cores. The unfortunate part is that unless the player farms those items to expand them, it is best to get better equipment and save some time. Perhaps there could be another currency for defeating an enemy that could be better and be universal rather than needing specific items to streamline the upgrading process and be worth the effort. 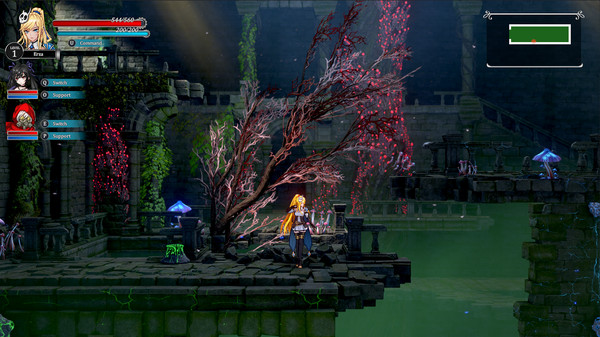 The other system that the game has is its cooking system which can be used on any bench that is used as save points. Multiple recipes can be bought by the cook to expand your options. Each recipe increases different stats for a short time, but very few recipes have more than this, unfortunately. The other downside about the food buff is not the amount of time it gives you for the buff but the timer for the buff ticks down while you are in any menu and cutscenes. The lack of options other than previously specified and the shortened timer made it feel like the food buff could have been better and could use some improvement. Another mechanic that would need to be improved upon is the ultimate attack. You may get it earlier, but on my own playthrough, I received it at the very end of the early access and hardly got to use it. Another glaring issue about the game is the dialogue text while they are speaking (The voice acting is currently only in Japanese.) that words are split into two while reading it (i.e., for example like this), wrapping around into the following text bar. 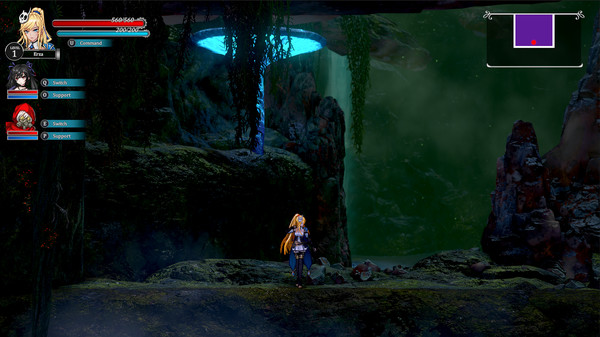 The game’s visuals are quite impressive compared to other Metroidvanias, and the enemies were diverse enough that I did not see the same reskinned enemies much. However, in a talking dialogue scene, when the player sees the characters talk in more of a visual novel style, the characters’ facial expressions and emotions seem duller and more vacant than their CGI counterpart. While there are some issues with visuality in the game, the audio makes up for it, as the music fits each area that the player will enter. Even though the game is in early access within my playthrough, I never encountered any bugs or glitches in the game, which is quite impressive since it’s almost expected to find one, even if it is insignificant. 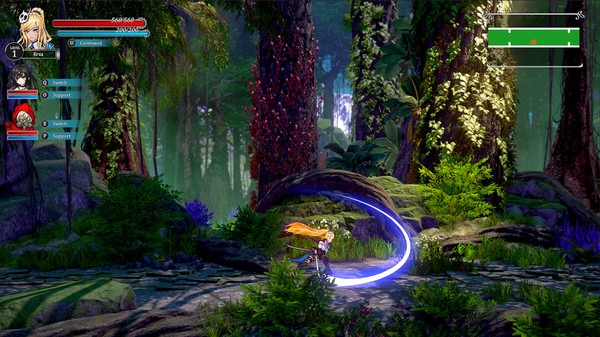 All and all, I enjoyed the game though your game time may vary from 8 to 10 hours depending on how thorough you are with the map coverage. Keep in mind that the story is not complete; once you get into a certain area, it will be the end of the game while it’s being made. If I could sum up my personal experience with the game so far (Patch 0.51.030 as of the writing of this article.) that this is a flawed Metroidvania with lots of potential, and I would keep an eye on it in the future.