The OPUS series is a loosely-connected set of tragically dark games, starting with The Day We Found Earth, about a little robot whose entire job was to find Earth after some catastrophe or other. Rocket of Whispers was the story of two survivors of a planet-wide calamity building rockets upon which they launched the dead into space as part of their burial ritual. 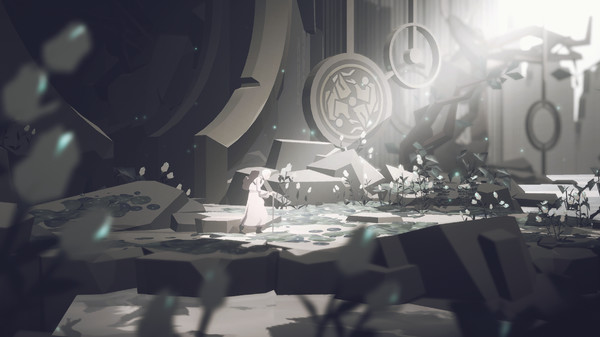 In Echo of Starsong, you play as Jun, a noble of a tribe of people that backed out of a war sometime before the game began. He’s been sent into the area his people left decades earlier to find a new place to mine a substance called “Lumen,” with which this little patch of Humanity powers its society. Long ago (but still within living memory), a Great War was fought over Lumen mining rights in a place called “Thousand Peaks.” Over the course of that war, not only did the Ocean people depart, but much was made of the use of “witches,” those with the power to hear the Starsong generated by the various Lumen-bearing asteroids and sing them back to record them for later use. During the war, the major faction used these witches and their abilities as weapons of war, revealing Lumen energy signatures in all manner of contrivances (including enemy starships, it seems). After the war, they were not only cast aside but openly vilified for their role. Thus, years later, a disgraced Jun is exiled, left to find new asteroids after his clan is stripped of the rights to the ones they had. Soon after arriving in Thousand Peaks, en runs into Eda, whom, after a rough start, becomes his closest companion throughout the game. As tacks are made of brass, it’s time to go mining (I ran out while writing up the last game). 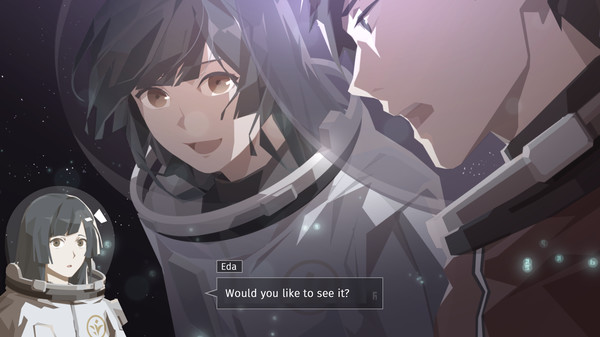 OPUS: Echo of Starsong bills itself primarily as a visual novel— and to a large degree, it is. To that end, you’ll find no super-finely detailed graphics here. There are a lot of gorgeous still shots of environments, people, and so on during the visual novel segments. Beyond those are in-asteroid exploration segments, referred to as cave running, and other bits finding things on a map of the system (which you’ll fill out as you go, no cheating). Everything you see in-game is suited to the sort of environment you happen to be in. Caves are dank and filled with various bits of debris, and the system map includes gas and dust to diffuse the primary. The animation quality was also good, especially given the low-poly appearance of the characters in cave-running sections. The game takes a big part of its core mechanics in sound— not a lot of music for the game as a whole, but that makes the incidences of Starsong that much more impactful. Nearly all of the puzzles center around them on some level. Sound effects are sharp and snappy and used judiciously. 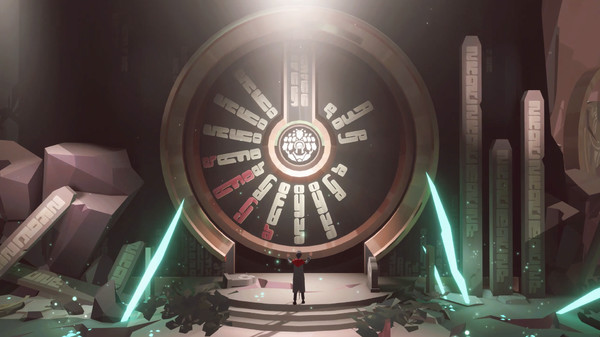 Gameplay comes in three forms, as outlined above. We don’t have much to the tutorial here. Most of what you need to know is introduced as you go, and the minimum of information on the controls is provided for each puzzle as they arrive. Learning to open Myriam gates took me a while the first time, but I sorted it out after a bit. VN sections offer places to go and choices to make, some of which are immediately impactful. Others will take several whiles to sneak up on you and bite you on the butt. Every choice has some effect, some less obvious than others. It is possible to get Jun killed, and if that happens, we get to see Old Jun (as the unreliable narrator), faults his potentially dodgy memory, and sends you back to try again. The story is about Jun and Eda, but it is told by Jun alone, reminiscing about his time with her sixty-six years after the events took place. He’s gone back to the place where it all ended, as the story of his life comes to a close. The player is put into Jun’s shoes as he remembers events, with little popups at every location saying something about the place the player has taken the team. He remains silent as each scene plays out. It’s not the first time I’ve seen this sort of structure, but when done well (as this game is), it can be very engaging. We already know how it must end (since he’s sitting there and she’s not), but the road to get there isn’t nearly so clear. 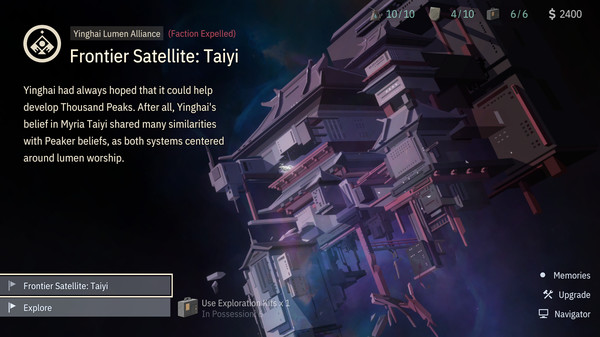 I found no major bugs to speak of during my time with OPUS: Echoes of Starsong, but I will give you a word about the controls: Most of the game is a side-side movement across the width of the screen, but a push on the W and S keys can reveal a way around otherwise insurmountable obstacles. The game has full controller support, but for the purposes of precision, the keyboard and mouse ended up being my preferred method. There’s nothing wrong with either, each to his/her own. Opus: Echoes of Starsong is a strong, polished experience with little in the way of wasted effort. Most projects of this sort tend toward feature and scope creep, but this one maintains a strong balance between the three gameplay types to such a degree that nothing gets stale in short doses. If I was going to complain about something, it would be the utter lack of manual saves. Each major location or event gets an autosave without indicating how far it is to the next. You’ll get a sense of when it might happen as you play, but it can be aggravating to get a long distance from your last save, and something crazy happens, and you have to go back through a long period of old material before the next new bit. That said, and at $17.99 for a game that’ll take you four to eight hours of solid gameplay, you could do far worse if you’re a fan of sci-fi and visual novel-style storytelling.

Lord Crocosquirrel gives OPUS: Echoes of Starsong a Drastik Measure of 8.0 of a possible 10.0 (80)