Witchcrafty is a quirky-charming Metroidvania with an extra-large mountain of snark and cynicism. It’s done in a cartoony pixel style, as opposed to the grittier tone of other genres’ games. Not that the game will be easy— it will not be. I caught the vibes of a recent, amazingly popular game that turned up a couple of years ago. Witchy must head through a huge collection of platforming rooms, full of hazards that are both environmental and active hazards (there are fire-breathing flowers, of all the things) that she must jump, hit, shoot (with a limited set of spells and limited mana) and dodge roll around.

After a hard night of drinking with the local satyrs, Witchy wakes up to see that goblins invaded her village while she was out. When the High One (another witch) presses her into service to clear up an unknown “corruption” and the subsequent failure of Witchy’s attempt to stall, it’s off into the unknown. As one might expect, the first few involve little signs that go over the buttons you use for what purpose. After you get your first spell (Fireball), it’s time to learn a hard truth: Your ammo supply is also severely limited. So it goes, stage after stage. 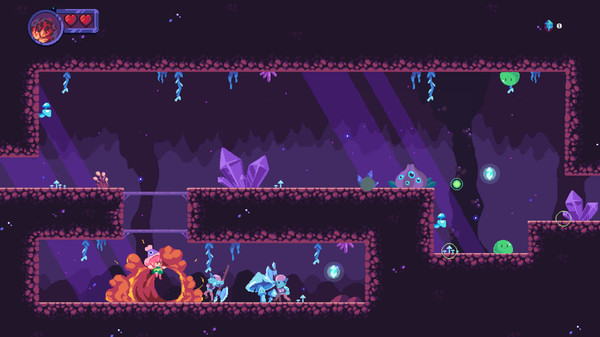 So, let’s have a look around and kick the tires. Witchcrafty’s implements a 16-bit graphics style reminiscent of some of the earliest Metroidvania games, particularly those found on the SNES. If you like charming and cutesy, you’re in for a treat—there’s a lot of that running around. Witchy herself sports a neat little short dress and huge pink and purple witch’s hat (her attitude, not so much), as well as a “Saturday morning cartoon” feel to the art that is attractive for what it is. Health pickups range from flowers to little bushes that otherwise seem like background decorations. Other things are destructible and have little effects that add to the experience.

The chiptune soundtrack isn’t particularly groundbreaking, but it does match the retro feel of the rest of the game. The effects are minimal, mostly focusing on audio cues, so the player clearly knows what’s happening on-screen and different sound effects for each spell, attack, and two jump noises (you can double jump from the beginning). It suits the intended purpose but will stick with you once you turn the game off. No earworms here, I’m afraid. 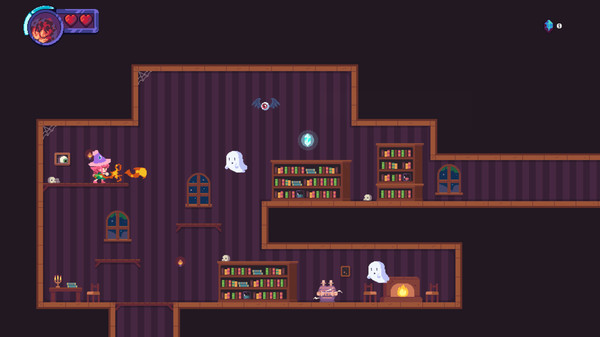 The gameplay is simple—Jump around to the various platforms in a huge maze, destroying things that need it, including the local goblins, mushrooms, fire flowers, and so on. It’s much harder than it looks on the surface. Some of the hazards you’ll face are strictly environmental—spiky bits on the floor or ceiling (both in some places) that require careful navigation, lest you get tossed around until your health runs out. Other things will shoot at you or simply run you down if you don’t whack them first. Unlike some other games, particularly the older ones, there are various save points scattered around the map, and if you’ve talked to a particular critter early in the game, you’ll be able to move between them as you discover each one.

Looking behind the curtain, you’re met with a basic premise that boils down to “Find the Big Bad, murder it, and move on to the next bit.” Rinse and repeat. There’s enough here to point you in the direction you need to go, but not enough to create a sense of the world. What there are consists of snarky, cynical residents of the various places Witchy needs to go through. Everyone is willing to help, as long as it’s not their butts on the line. 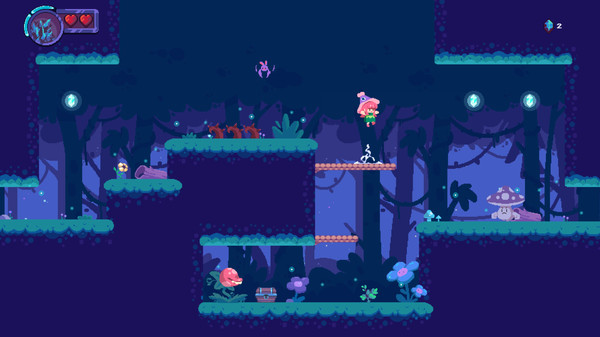 Technologically, the game has some serious problems in the control department. Input lag, missed inputs, and button confusion plague the game, and while you can find ways to cope, some buttons’ placement is questionable. On your Xbox controller, the jump and dash buttons are A and Y, while your attack is bound to B. If you want a jump-dash, the translation is vertical rather than the more natural diagonal to the closest buttons. It can be done with practice, but be prepared to take a few deaths along the way. With no ability to rebind keys, it can initially make for a frustrating time.

To wrap up, Witchcrafty will be much beloved by those that want their games hard as nails and twice as mean. Witchy herself oozes charm and cuteness, and the environments are nice. Beyond that, there’s not much to recommend here. It works, mostly, and is inexpensive for the amount of gameplay time you’re going to get out of it. Keep an eye out for Jake— he’s probably plotting to destroy you.