Indie game publisher tinyBuild is still going incredibly strong, 11 years after its founding. Critical reception aside, they have published over 50 games in these 11 years, many of which have been favorites here at TDM. How does this latest title publish by them stack up? Let’s find out.

Released at the end of 2021, Trash Sailors is a rather gorgeous-looking sailing adventure game by two-person Polish studio fluckyMachine. Okay, semantically, it’s one woman with the hand-drawn art and one man doing everything else (which, I’m guessing, in addition to the programming and design, includes the soundtrack and sound effects). While ostensibly the studio’s second game, I could not find any info on what their first game was. 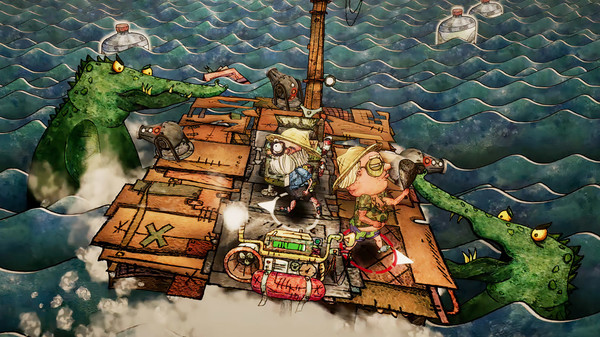 You begin to wonder if the game isn’t a sly critique of what is going wrong in society in modern times when you look at the premise. The world is flooded in the trash, eerily paralleling our real-world circumstances. (Maybe that’s a slight exaggeration, but it’s hard not to see our world going the same way.) Somehow, the sailors in the game are far more resourceful than we are, managing to fish out trash from the trash-filled seas and then converting it into valuable resources for various purposes.

Concepts are gradually introduced throughout the first few levels. You start by learning how to build your raft, fish for trash, feed it into the trash grinder, convert it into resources, and finally build, mend, and/or power the raft. Those are the easy basic stuff. Later on, you’ll have to learn how to switch on the mast lamp and keep it lit at night, fight off enemies, and so on. 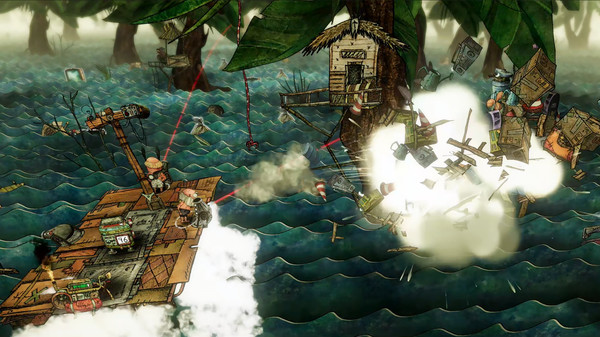 The only real mode of gameplay is what is described as a ‘story’ mode with various levels that seem mostly handcrafted, save for the varying trash pieces and obstacles that aren’t houses. There are a fair amount of levels across at least four worlds, but most of them are initially locked; to unlock them, players will have to fish out map pieces in earlier levels.

Here’s the crucial bit: Trash Sailors requires at least more than one player before things are actually more fun. The first tutorial level teaches things differently depending on the number of players. With only one player, it teaches you how to use your AI companion (if you have them selected as the second character) or switch between characters (if you picked a second normal character). With two or more, it teaches both of you what to do. 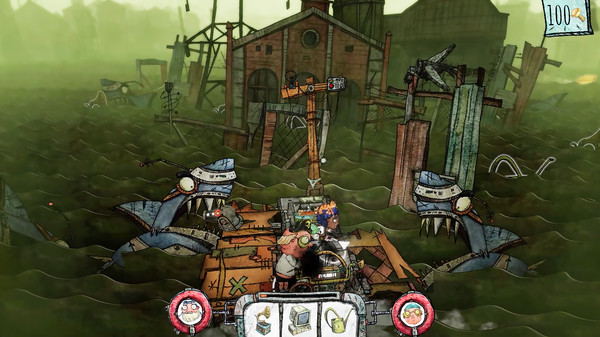 With single player, you have to put your AI companion to steer the raft or fish for trash. You still must manually load the trash into the grinder or use some controls to steer the raft. I assume this has been extensively playtested and proven to be possible in single-player, so I could very well have been horrifically terrible at it. Still, single player was difficult up to the point where it felt way more frustrating than fun and easy to be overwhelmed by the sheer number of tasks to manage solo, along with their own keybindings.

Having said that, I do note that there are some avenues of being able to progress even if you’re struggling. Notably, your amount of grinded resources and screws (which is a persistent currency that I’ll get to in a bit) appear to persist across levels, so you could effectively grind an easier level over and over for resources, then head into a more challenging level and progress while avoiding grinding for resources entirely. There’s also a series of accessibility settings to make things easier and for the less able, but while I personally welcome their inclusion for such a demographic, my nature is not to use them myself as that would effectively be me admitting defeat to the game’s difficulty. 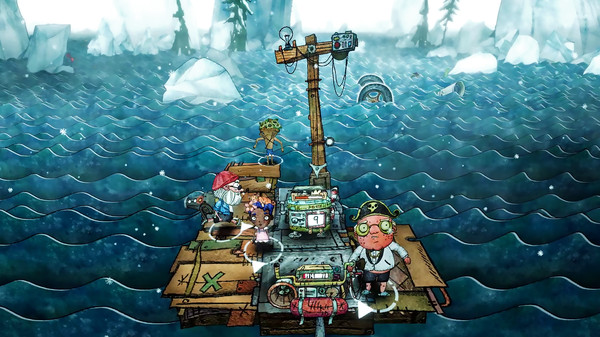 Completing each level awards you the aforementioned screws based on how well you’ve done. Again, these can be grinded by playing levels repeatedly, though the process may be slightly slow. Perfect trash grinds award screws can sometimes be found floating in the seas, and as a fun touch, they can sometimes be found on the world map. These screws can be used to purchase various upgrades for your raft and new clothing/customization options. The upgrades can help significantly in some aspects, but their high cost means it will take a while of farming to get them. The prices of some of the customization items are also baffling as some of them keep increasing in price relative to the previous one and removes all incentive to buy them; perhaps the intention is not to encourage the player to get everything.

Anyway, back to the actual game. While the single-player was rather frustrating, it is in multiplayer that the game provides far more mirth. I could not test out online co-op, and it currently only supports multiplayer with your Steam friends, none of which I had played this game, so I had to rope in my brother yet again for local co-op. Admirably, the game handles split inputs impeccably as I could control one character on my gamepad and my brother on the keyboard and mouse. With just the two of us playing, things were still challenging to micro-manage as there are so many aspects. We generally found the most success delegating each of us to a front or rear half of the raft, though comically, this still did not prevent us from crashing into obstacles most of the time (the resultant bickering was likewise hilarious). I would presume that this is easier to manage with 3 or 4 players, each being mostly dedicated to a single task (and swapping manpower priorities on-the-fly where appropriate). The nature of my brother’s chief complaint was that having so many actions bound to the same key also made performing the correct action a challenge at times if they were too close to each other — for example, accidentally climbing the mast to pick up a piece of stored fished trash from the sea (if the grinder wasn’t showing the correct loot), as being stuck on the mast can cost valuable time. 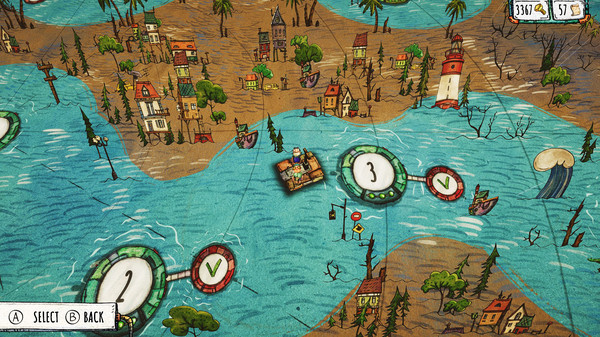 This is all wrapped up in an incredibly charming presentation with a generally calm soundtrack and the key highlight — the hand-drawn graphics. It’s definitely one of the game’s strong selling points, with things being presented in a cartoony manner. It also evokes similarities to the art style of We Need to Go Deeper (curiously enough, another game requiring multiple players to enjoy fully).

Trash Sailors is unfortunately hard to recommend if you don’t have additional bodies to play it with, especially at the current asking price of $19.99 on Steam. If you can get a friend group together, go for it.