What do we have here? A little dungeoneer? Here to fight monsters and demons, anything that comes near? Fighting their way through the darkness, vanquishing evil. Most start with no experience, but if they live, they become the strongest amongst their people. No one has been able to make it too far, though; their attempts were feeble. 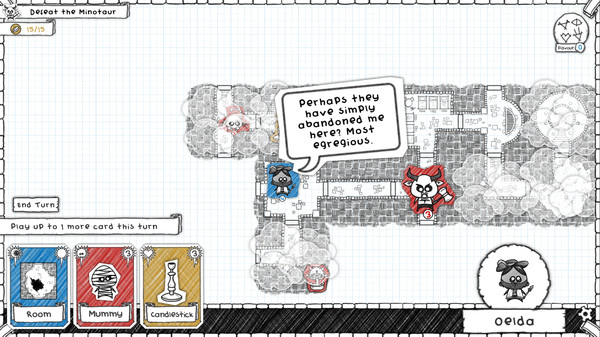 Guild of Dungeoneering is a turn-based roguelike that doubles as a dungeon crawler and a deck builder. You create the dungeon as you play, along with fighting enemies and a boss. 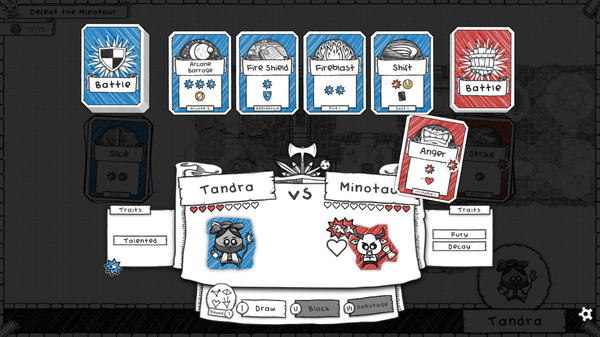 Starting off, you’ll have to build your guild. It is where you will recruit your dungeoneers to fight for you. You can apply multiple upgrades to your guild, from different class recruits, more weapons or armor, and add-ons such as a trophy room. Each upgrade will cost you gold, so you have to go out and earn some. When you enter a dungeon, there will be a task and options for creating your path within the dungeon itself. Each dungeon area has three levels, with the last having a boss. With some preset tiles in place, you must level and create your destination to the end goal for that level. With each turn, you can place three things: a path tile, enemy, or treasure. You might think, why not just create a path with only gold to the enemy? Well, you only can get equipment, armor, and weapons from enemies, so you have to plan accordingly to fight so you can take on the boss or high-level enemy. If you don’t, your character will die permanently, losing all their passives and possibly gold. Since this is also a deck-builder, the equipment you acquire along the way gives you more cards, so you’re choosing what to build depending on which item you decide to take, being able to equip four slots. Defeating a monster will also level you if it is the same level as you, giving you more life to take on the next bigger enemy. It can be situational depending on what you want to face, as gear has the potential to be defensive, magical, or physical. It works the same way with enemies, and if you’re in a certain level or dungeon, it may influence what you want to pick for your fights. 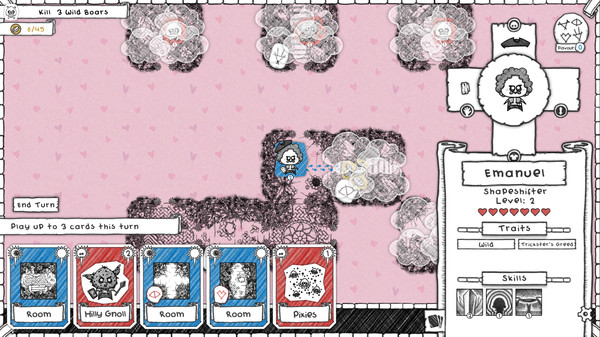 After acquiring gold, you’ll want to either add more classes or equipment that spawn in dungeons. Classes allow you to go in with different starter builds, such as magical, defensive, quick, or maybe even one that steals enemy cards to use against them. There are quite a few to choose from when upgrading, but they will get more expensive the higher the tier. Some may be physical or magical or have some other effects. It works the same way with the equipment. The more you survive with a character, the more passives they will unlock, making them potentially more powerful. So it’s a good idea to try to play tactfully to use them to your advantage instead of trying harder levels with new bodies. 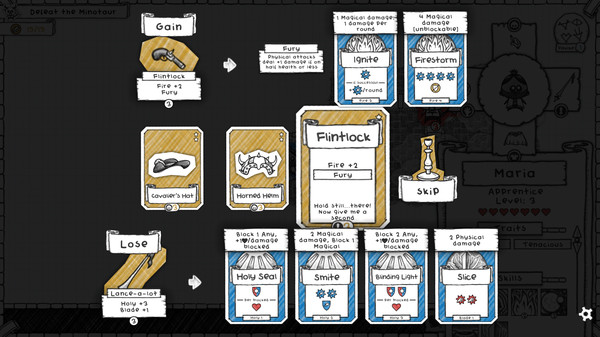 This game has a playful art style with a draw-on-paper aesthetic. It seems to lean towards a more family-friendly style, nothing violent in this, which is perfectly fine because the gameplay doesn’t need anything like that. It still gives off the tabletop vibe when playing and isn’t too childish looking. While the sound effects are minimal, the voice-over from the narrator’s bard serenades you with deathly rhymes and poems about your adventures and advancements. There haven’t been any other issues with bugs or optimization issues. 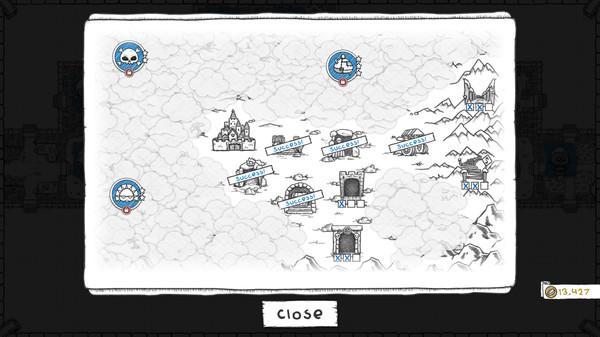 Though some things clash with the idea of it being a roguelike, in my opinion, there is a grind to the game that feels like it takes away from the gameplay, but the system seems to need it because of how the overall mechanics are in place. Since you can put down your own gold and loot and technically can infinitely build out the dungeon with tiles, there is a cap on how much gold you can earn, so you won’t be able to farm infinite gold and buy all the end-level stuff. But the balance of the amount you need to get to the second tier and how much you can earn in one dungeon level is too far apart, especially in a roguelike where you lose most of, if not all, of what you earn in a dungeon. Roguelikes are notorious for being RNG and a more difficult genre than others with permanent death. It creates a grind for a currency that kind of takes away the enjoyment a bit and doesn’t create that drive to see what the other upgrades will do. It doesn’t really have to do with the difficulty of the game either; that seems fine in itself, but rather the time it takes; there’s only so much excitement you can get from redoing levels or types of bosses you face. Some even may require trial and error to figure out what you need to build so you can face an enemy.

It was a fun experience, but unfortunately, it didn’t keep my attention. It wasn’t too exciting to keep going with trying to unlock things, and enemies become a bit predictable when needing to redo a level. But it is overall a simple and great game in itself. I know people who would really enjoy this, and since it has a lot of content, you can get a lot of hours of this, which is important when purchasing a game. You can pick it up on Steam for $19.99.