Cult of the Lamb is a mix of action roguelike combat and town management. Devolver Digital publishing something is always in my interest as they tend to have some of the best and most fun indie games. The game itself comes from Massive Monster, that done with more platforming games. Playing Cult of the Lamb, I feel they found what they may be best at. The cute mix of dark humor and horror of the world gives Cult of the Lamb a nice style. 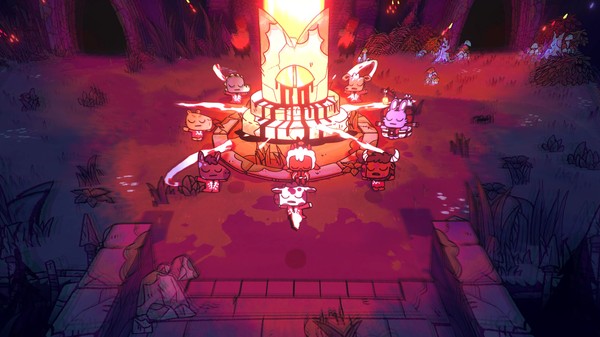 Cult of the Lamb starts the player on the story of being resurrected by “The One Who Waits,” a god that wants you to free him. You grow your own cult and fight your way to slay the four bishops to do so to free from the bonds. Along the way, you meet others around your cult’s home who can help unlock more options for you. The story is simple, but it is more about how you go about your task. You can be more of a peaceful and happy leader or more of one that purely uses your subjects for more power. Doctrines you unlock give two choices with strong bonuses or rituals that will change how your cult operates or views things daily. The easiest example is how they view death or even old age. The ones you rescue will age and die as the days pass. Rather it is good to die young or embrace the elders that walk among them. This becomes important once you know elders can’t do any work but still need to eat. Ever needed to find more to replace them. 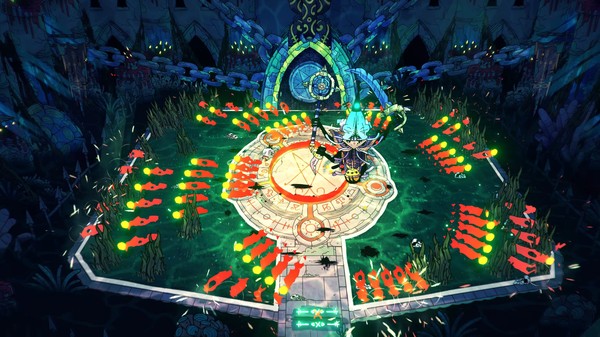 Resource management is the name of the game at your home. Faith, Hunger, and Cleanliness are simple but quick to gain and lose simultaneously. Time doesn’t halt when you go into the Roguelike combat part of the game. If things are not prepared correctly, it can go bad at your camp. I never ran into issues on this side as it brought a nice balance of both sides. The roguelike contains valuable items and a consistent way to get more followers. Rituals you unlock provide large bonuses to your cult, farthing making resource management easier. Nothing felt harder on the management side as I progressed. If anything, it makes it easier to have a large cult. More in your cult means more working. As you unlock higher-tiered buildings, the cultist can do more for you. The decorations and layout let you do it how you please and have your personal style. The player can also move what was placed at any time without worrying about rebuilding it. Progression on the cult side unlocks more on the roguelike side to better progress in the story. They both help each other amazingly well. Once you reach the max EXP, the EXP becomes coins to make things better. 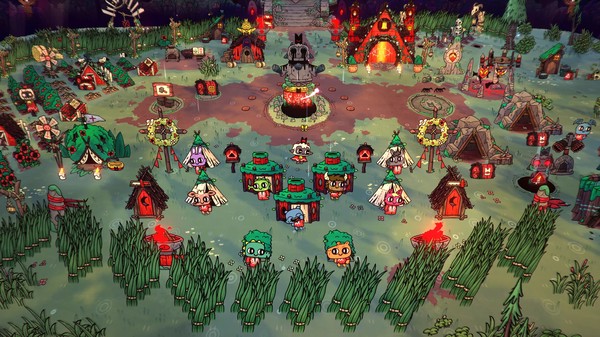 The Roguelike part of the game is your simple, get upgrades, and beat the boss. Anyone that played any roguelikes will feel right at home. The zones and environments are well done; some random destructions constantly drop items. Plants have a chance to drop that plant; things made of bones can drop bones. You have been given a choice of areas to go to: events, areas that haven’t materials, or an area with normal combat rooms. Besides the theme of the areas, they branch off so the player can plan where to go. At the start of your roguelike run, you are given one random weapon and one random spell. You can replace them later if you run into them. Ability style tarot cards are the buffs you gain on the runs. The grade of the spells and weapons are leveled from the cult management side. This also unlocks different types one can find. Weapons range from hard-hitten but slow weapons like hammers to fast but light hitting like a dagger. Combat revolves around attacking and dodging attacks; at the end of each run, there is a mini-boss. Once the play destroys three mini-bosses, they can take on the final. Cult of the Lamb does well because success happens more than failure as you complete segments. You don’t have to “perfect” an area all the way to complete it. You run and complete it a few times, then do it again on the boss of that area. The progression and flow of the roguelike felt challenging and rewarding without the feel of a long grind or stuck in the same place over and over as many roguelikes do. 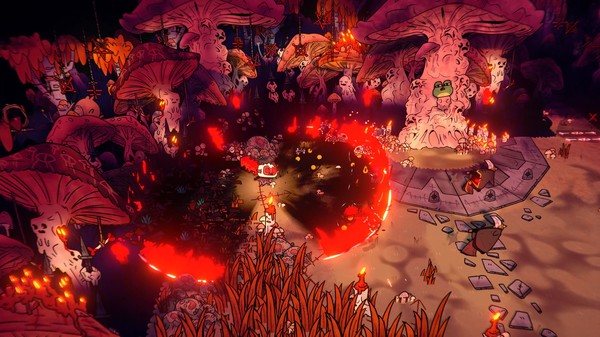 The music and style are amazing and charming. A type of cute and dark I hope to see more of. Despite all the praises, my experience with Cult of the Lamb was a bit buggy in some harsh areas. From collecting lumbre or stone in the “mines,” from working on my farm to the janitor station. Building and such my followers can work on would never be worked on. The game wouldn’t let me assign them as they claim there was nothing like that to assign them to. The automation parts the followers should be working on often did not work right. Other parts cause some red flags as some enemies in the roguelike part would be outside the map. Traps would be “active” even if they were deactivated when the room was cleared. These were the worst bugs, but I could complete the game easily. Other bugs include buildings disappearing till I reloaded the game and your followers giving impossible-to-do quests. Such quests like bringing a follower back to life but are still alive or unable to be selected in the ritual. With only one quest from your cult being available then, I had to wait out and fail it to get another. 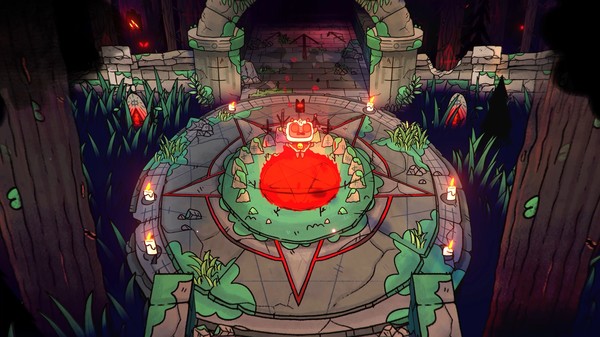 Overall, I love everything about Cult of the Lamb. It is one of the year’s gems to me, and I am excited to replay it again. The mix of cute and dark humor is done well. The mix of the management with roguelike is done so well. The bugs make the game annoying, but it seems they are addressing it with a report system. It is worth the try if you enjoy the game’s look. This is one of my favorites so far this year. 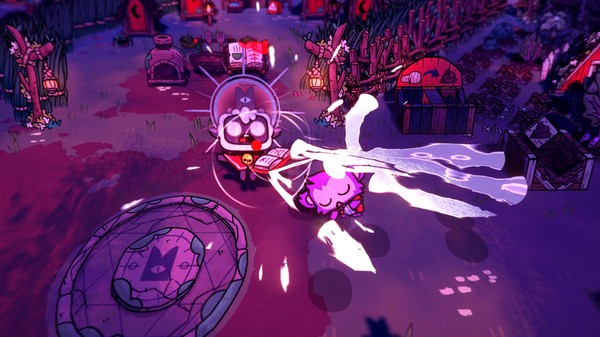 I look forward to more to come from this series and the developer. Devolver Digital still proves it has good tastes as a publisher.