Welcome to your new job! Here at Happy’s Humble Burger Farm, everyone is considered a family member. All you have to do is serve our customers in an orderly fashion, making sure everything is correct and on time. It’s okay to make a few mistakes, but too many will cause Happy to be, well, not very happy anymore, and trust us when we say, you don’t want her to be unhappy. We would also recommend just taking the bus to work; there’s no real reason to look around the area; it’s mostly boring. Just do your job, and you’ll be fine! 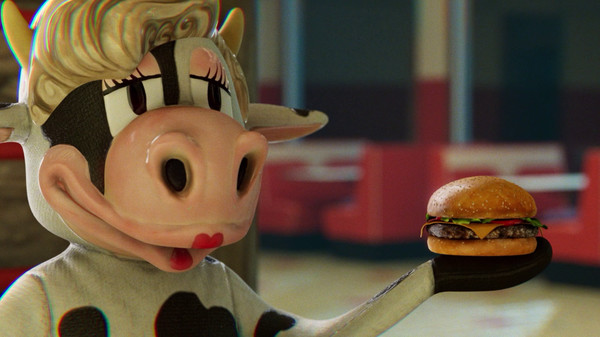 Happy’s Humble Burger Farm is a restaurant simulation game with some horror. Thriller and conspiracy aspects. It also has a bit of exploration and undertone story to follow. 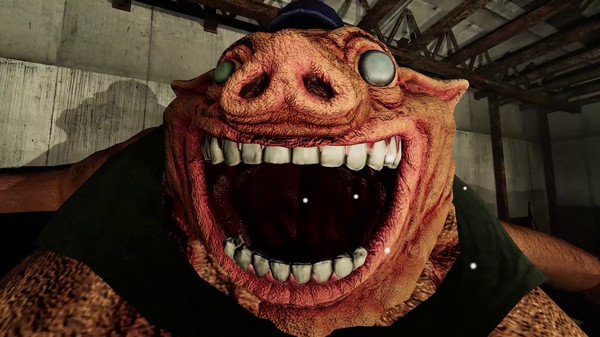 It might stand out to people when first laying their eyes upon it because it isn’t just a burger-flipping simulation. It has a clear ominous tone, dark atmosphere, and weird franchise. You’ll start off in your apartment, ready to start your new workday. After greeting the best neighbor a person can have, you’re going to make your way to work, which happens to be a graveyard shift. It’s not too far out, and you can pay a small fee to take the bus or walk there and enjoy the town a bit. Slowly over time, you’ll unlock and notice more about the town if you decide to explore. When you get to work, you’ll be given tasks in the restaurant, such as cooking several types of burger meats, preparing different sides, pouring the drinks, and keeping up with orders. There will be other side tasks to complete for bonus payments, such as cleaning up the restaurant, and as you progress, you’ll have to do more things for the restaurant. After a hard night at work, you’ll get paid and be able to explore your way back. Pawn some items, get a coffee, or buy some cool things for your apartment. As the days pass, more chores will arise at the restaurant; now, you’re also taking orders from the drive-through, baking sweets, putting out fires, unclogging toilets, making shakes, taking deliveries, and taking out the trash, all by yourself. The difficulty increases and makes it harder to complete orders reasonably, which will cause Happy the Cow to come for you along with some of her friends randomly appearing to disrupt you further. While the days pass, you’ll notice more things happening in your small town as well; maybe you’ll ignore it, maybe you’ll start noticing something hiding under your nose. 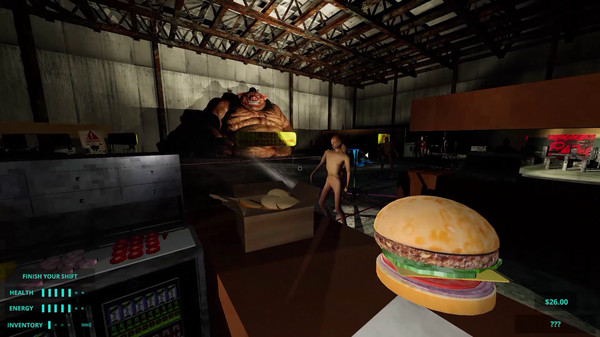 A lot of the sounds and music is subtle. Being in a town at night or a burger joint alone usually doesn’t bring in a bunch of noises, so it makes sense. It gives off that eerie vibe while at the same time giving off that feeling that something is amiss. This game has taken up one of the newest trends when typing this review: pixelated filter and early-gen console graphics like the PlayStation One. This style isn’t bad at all if used correctly. The mixture of older gen looking graphics and pixelated detail almost makes the horror or thriller aspect go up a tone. Something about it not being hyper-realistic and low poly makes it seem more ominous. Though some things have higher resolution than others, it kind of has a mixture. 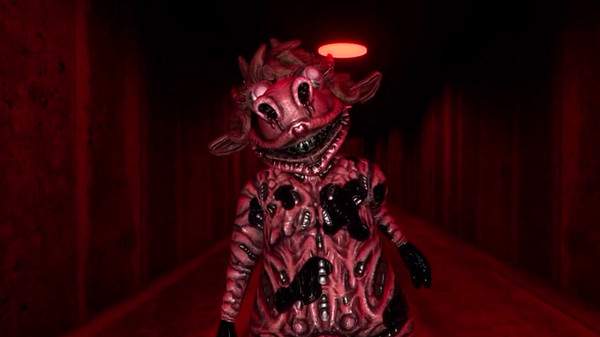 There’s a bunch to the story you can get, though it’s pretty linear. It kind of forces you to progress, but at the same time, it doesn’t give you too much context unless you look for it. This kind of side swipes people if they only see the game one way but makes the pacing feel weird. Though one thing that was either intentional or not was small context clues that help you figure out what your should do next in a situation that seemingly isn’t related. And while it’s still straightforward for the most part, you can adventure around the town and find other story clues, which you don’t need, to figure out deeper lore within the town. Unfortunately, it also feels like the game’s direction was split too hard. While both sides felt refined enough to enjoy, for some reason, it felt like they didn’t fit together well as one. Notes, writings, radio logs, commercials, and even the stores can provide little snippets of information you can piece together. 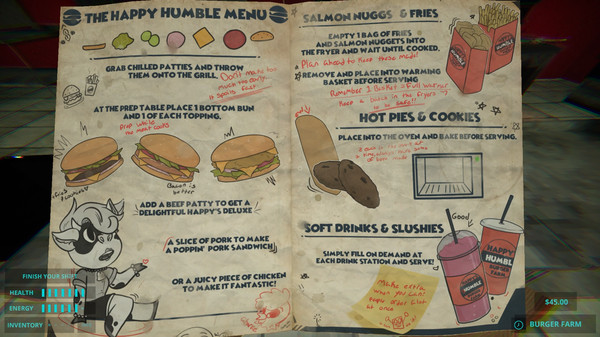 It wasn’t great, but it also wasn’t bad. While the gameplay seemed refined, it wasn’t anything too special and felt like padding for the horror aspect, which at the same time, it felt like the horror was just an off thing that kind of didn’t connect with its own context in the game. There were what felt like three points it was trying to put together, horror, mystery, and simulator. Then it tries to connect them in the story, making it feel a bit cliché because of the route it took. But it pans out in a way that seems like three different versions of the game are stitched one after the other. And each part was done well but didn’t feel like they fell in place cohesively.

I’m not entirely sure how I felt as a whole. I didn’t feel like it was very scary more than just having this subtle thrill tone. Like something was going to happen, but it never did. Its simulation part was really well done and even features game modes specifically for just doing that. And the mystery of figuring out what’s going on wasn’t too impactful at trying to trail into different parts of the story when it pushes you into the main narrative anyway. The game just felt okay to play. You can pick it up on Steam for $19.99. I would recommend anyone who enjoys horror, slight horror games, or even simulation games.