When you boot up the game, you are thrown into an interestingly-styled menu with all sorts of custom props. It can be a bit tough to navigate at first as many things are going on, but eventually, you find the main campaign styled in the form of a comic book. There are fully-acted news-style cutscenes and the standard animated cutscenes that lay out the story’s plot. 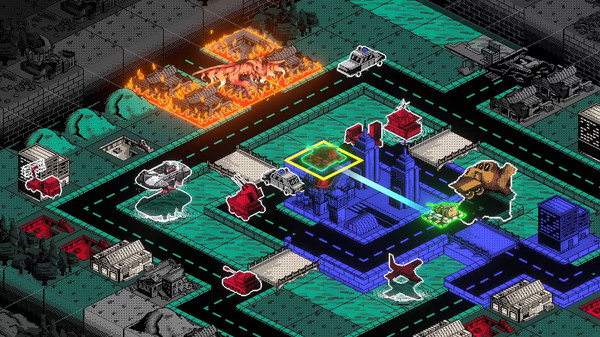 If you’re even partly versed in Japanese culture, you might have heard of Godzilla, likely Japan’s most iconic kaiju. These kaiju are gigantic monsters that tend to attack major cities and battle the military. As the Act 1 story goes, you’re the mayor of one of such cities, seemingly being besieged by unknown powers that are somehow commandeering and aiding kaiju in the latter creatures’ attempts to destroy the city. In this game, you are the military.

The early missions gradually ease you into learning the game’s general mechanics. You start out with a limited number of buildings that have been erected; these generate an amount of money for you each turn. You use this money to build airfields and army bases, and then from those, you deploy units. A kaiju spawns in, and every turn has a limited amount of moves, where it goes around smashing up said buildings. Though they cannot actually be killed, they can be damaged enough to flee; your goal in most levels is typically to either do so or just survive long enough for other activities (scientific breakthroughs) to succeed. 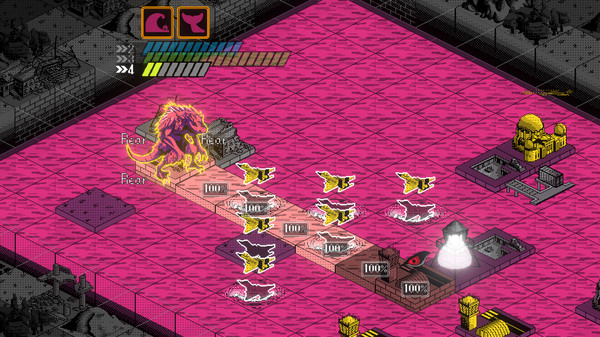 Gradually, more and more things are introduced over the next missions. Things like Dark Projects, played by the AI every turn, give some form of a boost to the kaiju. At some point, you also get to pick from 1 of 3 boosts each turn called surprise surprise, Projects. Later on, you even get a mechanic called Ace units, special units that are upgradable using the medals you earn from successfully completing mission objectives. 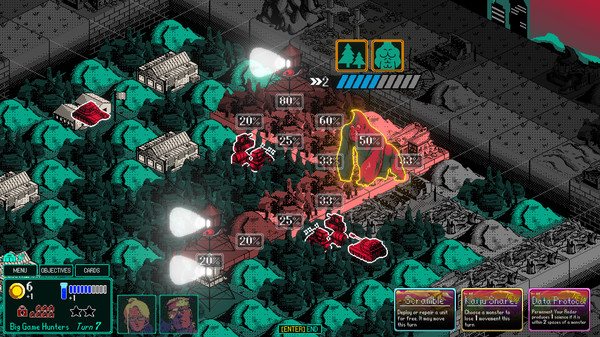 The first main thing to praise about the game is how well it is executed. The realistic main menu is a cute visual touch, and this pairs well with the retro-themed stylings of the actual levels, executed in an isometric fashion. The cutscenes feature hilarious dialogue, a rather stereotypical Major of the army, and the serious researcher you have to protect, among other characters. The various kaijus you have to battle against is rendered in a rather cute style that you never really feel ‘afraid’ of them, despite their desire to smash all your buildings to smithereens. This is married to a rather stellar soundtrack in a predominantly chiptune style by relatively unknown composer Kent Weiler, who appears to be Foolish Mortals’ in-house composer. Each kaiju has its own accompanying music theme that sells the package as a whole.

Though the initial missions seem rather simple to grasp, as you progress, you gradually realize that the game has far more strategic depth than appears. Optional missions are more akin to puzzle challenges where you have to figure out the correct moves; they serve as a fun distraction from the more challenging main missions. Of course, with me not being particularly adept at the strategy genre, I struggled at times to find even a solution to the problem I was presented with, but the challenge was fun for a while. 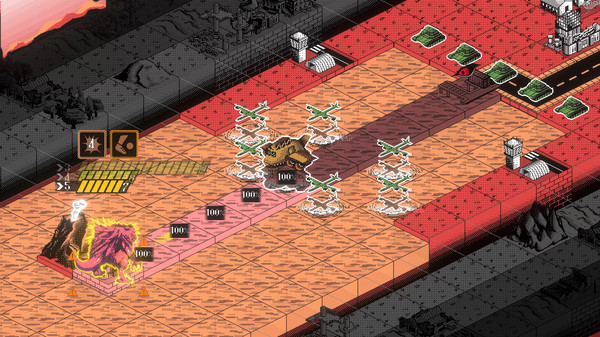 What wasn’t fun was how I could not reliably and quickly skip various elements during gameplay. My struggle, as mentioned earlier, to find the right solution contributes heavily to me retrying levels multiple times and trying various things. It has led me to conclude that replaying turns repeatedly proved to be a large hassle. Various cutscenes and animations end up playing out over and over again, such that even when I dove into the options menu to speed things up and skip certain animations, each turn still felt way too long to me. Granted, I am not the most patient of gamers, but by that point, retrying missions actually feels more like a chore than anything else.

A nice feature that works in the game’s favor is its immense replayability. While it is possible to get through missions without seriously optimizing (as observed by my resultant scores being worse than many others on the global leaderboard), there is some replayability in trying to hit those high leaderboard scores, as well as more challenging hard modes for almost every level. There’s even an in-game level designer with built-in Steam Workshop support too. The possibilities from there on are practically endless.

Retailing for $19.99 on Steam, Kaiju Wars is a more than worthy addition to the strategy aficionado’s game collection.