Rogue Lords takes turn-based combat into the roguelike progression and flow. Using a heavy gothic theme as you assume the role of the devil. Returning from his slumber to get his revenge on those that fought against him. Leading the way is the one known as Van Helsing. Rogue Lord mixes the roguelike elements nicely into a challenging and tactical turn-based game. You are expected to fail often but unlock more to slowly progress each time. 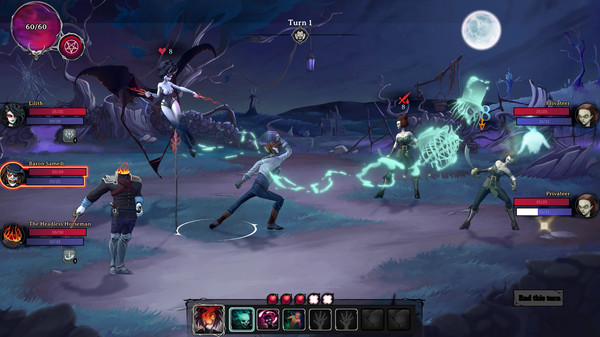 Rogue Lords starts the player in a very in-depth walkthrough tutorial to show the player all the mechanics. The tutorial lasts for the first mission. Characters you can have in your party range in the different
mechanics. You start with Dracula, the Headless Horseman, and Blood Mary. The starting party was nice, and I didn’t feel they were lesser once you get more. More importantly, it gives a good light on the types of party members you will unlock. They range from stories and folklore. Each party member has a few abilities, and as the player progresses on a mission, you slowly get changes to increase stats, get more skills and combine duplicates into stronger versions of that skill. The range of events can be a mix of risk and give and take as you pick your paths on the forked roads on the map. Anyone familiar with roguelikes will quickly understand this part of the game. Those new to these sorts of games will grasp it quickly as the game doesn’t hide information from the player. Even in turn-based combat, you are told what the enemy will do after your turn. This by no means makes Rogue Lords an easy game. Even on the lesser difficulty, the game has to be taken tactically. As you progress and select your options. Curses and the fear you create can augment the effects on the map in your favor or against you. Random optional parts within each area for that event can be done to get more or avoided if it is too risky. 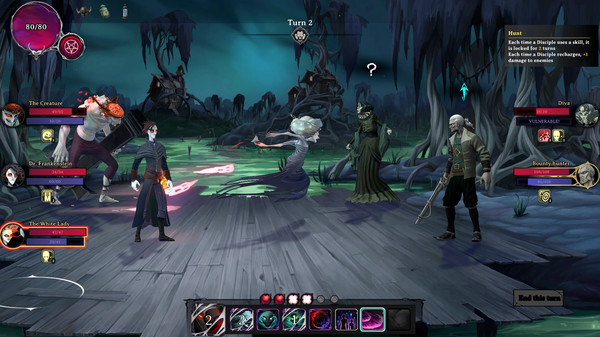 The turn-based combat plays a large part in the events that are for battles. There are boss battles at the end of each mission and normal ones scattered among the events. Stronger battles are marked differently for the player to know to be prepared. Combat has a wide range of effects and status to use for and against. Your party and the enemies have a hit point gauge and a spirit gauge. Both are separate health bars; you only need to deplete one to down the enemy. Once you or the enemy target is at zero, you are in a critical state. This state makes the target gone the next time it takes damage to that depleted gauge. This helps you from being one-shotted while making you have to be tactical more onto the enemy. You start with five action points. You can use any range of skills from any member. Skills also have a cooldown period that will come back in a couple of rounds. Once your action points are up and you end your turn, the enemy will do the one action you are told they are doing during your turn. 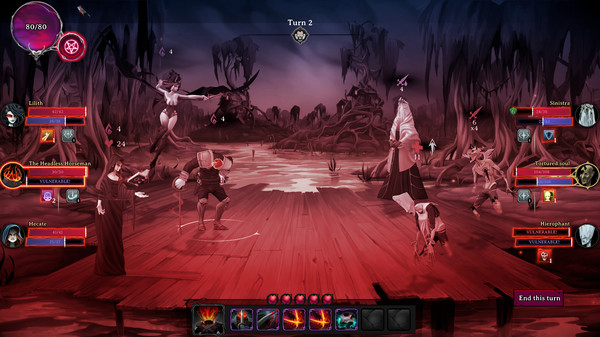 Having the devil on your side is an interesting mechanic that I enjoyed on Rogue Lords. The short version is you have another resource that allows you to “cheat .” Once this is depleted, the mission is
over as it acts like another health bar instead of your followers dying. Clicking the icon in battle allows you to do a wide range of effects the player is expected to use. You can move buffs and debuffs to anyone else, friend or foe. Reduce the health or spirit of enemies. Create portals to other paths on the map. Health, your party in battle. The player can even change options in the event that could fail. If the player has a forty percent chance of success, they can use the points to ensure it will not fail. My favorite way to use this mechanic was stealing the enemies’ buffs to put them on my own. 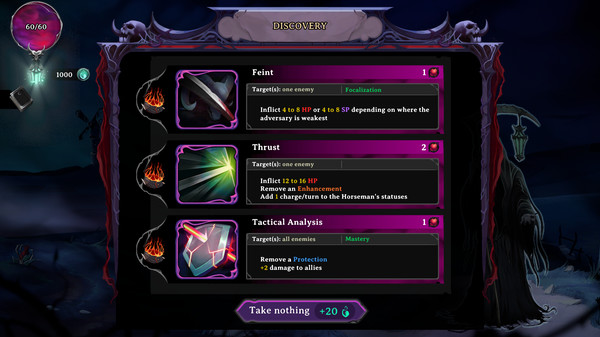 The look and feel of the game were surprising and spotted. The style flowed nicely for a Halloween feel then. Everything is animated smoothly in its style. The game takes sound bites and then fully voice-acted, but it is enough to immerse the player. The largest weakness of Rogue Lords is a similar issue with most Roguelike. The progression can feel overly slow to unlock new things. After finishing or failing, you gain experience to level up. You can get more options for your party members, a new party member, or more items that can appear in your next run. The progression was so slow that I didn’t unlock one of the many members until five hours into the game. Most of the progress felt lackluster in the rewards compared to others. I felt my progression in the missions was just from my choices with RNG than anything I was unlocking. The unlocks I got before the new character didn’t feel that impactful on the game. With so much care and tactical sight on everything else. I felt the level-up system was misplaced or just thrown in. 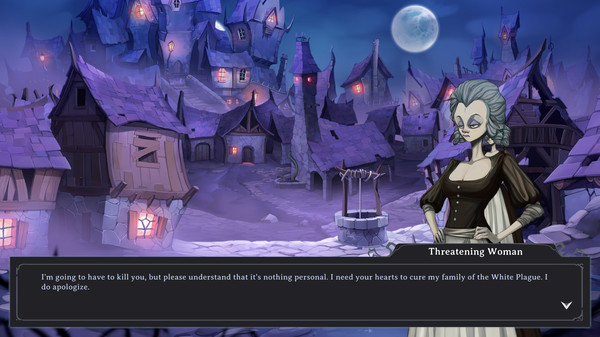 Overall, Rogue Lords is one to look into; if you are a fan of Roguelikes, enjoy the Halloween gothic look. I believe those who enjoy turn-based combat with this aesthetic would gain just as much enjoyment. Rogue Lords will be a game I’ll be putting on my Halloween game list to replay during October.