With lots of Metroidvanias using the 8-bit formats for their retro looks, it is a breath of fresh air seeing one that comes from the 16-bit era. Announced back in October of 2021, there have been many eyes on this title for its art style, the quality of the visuals, and its gameplay. Souldiers is a Metroidvania by the developer Retro Forge hailing from Spain. It being their first title developed is somewhat surprising but not unheard of for the industry. Although, for Dear Villagers, the publisher of this game seems to be within their element, with the game leaning towards a fantasy setting. The game starts as your battalion, led by General Brigard, is off to battle but gets buried underground as a Valkyrie shows up with a proposition for the general and his men, either walk into the portal or stay and slowly die underground. It is when the general walks into the portal with his army (Including yourself) to an unknown land, somewhere between the living and the afterlife, Terragaya. After the cutscene, the player either chooses one of three classes, the scout that is a short-ranged fighter that is balanced in stats; the caster that shoots out magic missiles from his staff, leaning into lots of effects using mana; and the archer that is ranged damage that excels at dodging out of the way. 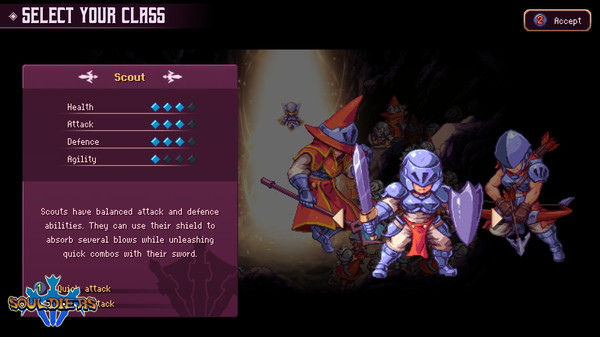 Because of these choices, this review will reflect on the gameplay of the scout, as this game can be quite long. Basic combat for all 3 of the characters is very similar; there are light attacks, heavy attacks, dodge roll, sub-weapon button, and your block. For the scout, his attacks consist of swinging his sword and doing a sizeable amount of damage, and having the ability to move while blocking with a parry; when timed correctly, the player can counter-attack using all of their stamina. The caster, while not being able to do as much damage as the scout, can shoot out magic missiles that seek out enemies when your close enough to an enemy, shoot out a burst of magic when your staff is charged, and can create a barrier to protect yourself like the scout’s shield. The archer’s basic attack is shooting your arrow while your heavy attack is thrown like a boomerang that recharges your arrow cooldown and blocks with just his arms. As the game progresses, the player will come up to some checkpoints represented by a sword on the ground-mounted with a small dragon; here, the player can save their game and fast travel to other checkpoints but only within that region. It creates a problem with the game’s pacing if you want to get into an area across the map; crossing from area to area will take some time and slow the game down. Even worse, two areas in particular only have a checkpoint or two. Hence, traversal of one of the areas is unavoidable, and another has only two where one of the checkpoints is in the middle of the map and one on the other end. After getting your first sub-weapon, the player can use ammo shards to use them, and each sub-weapon uses a number of shards to use each of the different sub-weapons. It could range from a bomb to blow up a wall, a hammer that is flung upwards (not unlike a certain retro-styled ax), a dagger (also not like another retro sub-weapon), an automatic cannon, and a flash bomb, to name a few. When the player finally arrives in the city in the middle of Terragaya, it’s treated like their base of operations. The player can obtain upgrades to their sub-weapons, weapons, shields, and a shop to get other oddities and consumable items. Besides needing the money for upgrades, the player needs to find minerals found throughout the game with each specific upgrade, either the player’s sub-weapon, weapon, or shield. Other upgrades can be obtained immediately by discovering them to upgrade their mana and a health orb shard that takes four to complete. 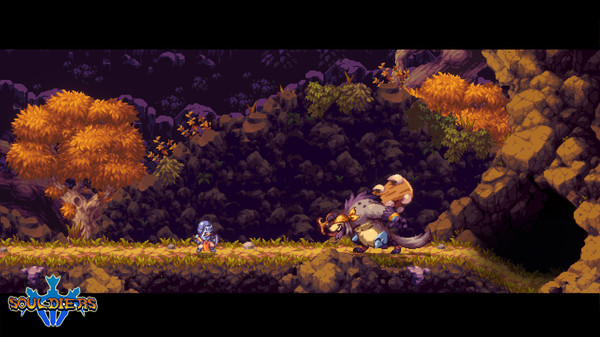 And now, for the finer combat points, they will obtain orbs as the player continues his quest. These orbs will have a power of an element in which there are five elements in total, with each monster weak to an element taking more damage than usual. Not only do you deal more damage when you have the correct orb equipped, but you can also take reduced damage from the enemy as well. With every level, the player gains, your soldier’s stats go up along with gaining a mastery point that the player can put into skills that add to the move set or add a passive. Speaking of the orbs, switching them on the fly is very quick and fluid with controller support and the rest of the controls, though the game can still be played with a keyboard with various successes. 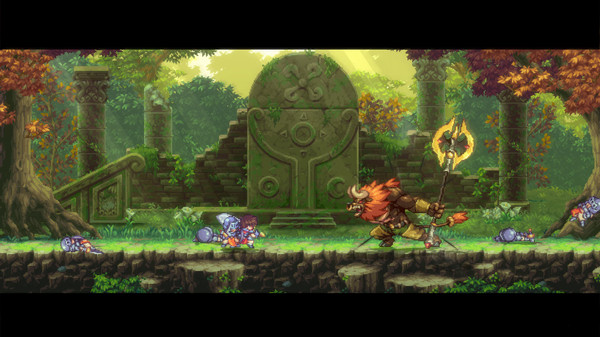 Now for the graphics, the animations from the soldiers, the enemies, and the NPCs are wonderfully done as each of their actions are detailed to pixel perfection and can be compared to the big AAA games of the SNES era! Speaking of so is the music of this game as each area has its own feeling and theme, reminding me of old platform and turn-based RPG music from the 16-bit era, which I have caught myself listening to the music by itself since the music was so well made! With all of this boasting, the game is not without its flaws. There are a few bugs that I have found within the game though minuscule, but the worst drawback is the game’s difficulty. Even though I played on the Normal difficulty at times, I have found myself frustrated getting killed repeatedly because of how hard the enemies hit. Though, as advertised on their Steam page that the combat is souls-like in nature, it seems they put the most challenging parts of platforming in Metroidvania games and the souls like combat. I can see this making the game into a bit of a slog at times for those who are not into challenging combat, even if you put the game’s difficulty on the easiest setting. The last thing I have noticed that has been troublesome is locating your target when hunting your bounty on the game’s bounty board. Because some of the areas can be overwhelmingly big (not that it’s terrible that the map is big), locating your bounty at times can take a lot of time (and I mean an hour, not minutes) and effort, which I see lots of people skipping it altogether.

I am pretty impressed that this is Retro Forge’s first game for the high quality they have delivered, and I am looking forward to where this game goes in the future and any future titles they will be making.