With the power that no one else has, you suddenly find yourself in a position to take on dungeons and monsters to help the land of Tasos. Build up a local town to fortify and expand your arsenal with different traders or bring in people from the city to help liven up the place. Each addition will take you closer to saving everyone from the mysterious evils that lurk in the distance. 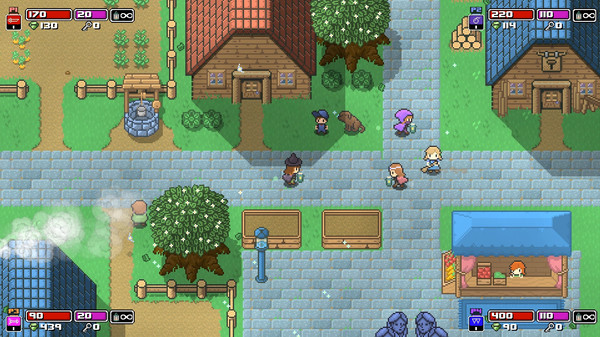 Rogue Heroes: Ruins of Tasos is a rogue-like adventure with procedural dungeons. It modernizes the old-school classic RPG style bringing in a nice mixture of gameplay from classic games many will know of. It can be played solo, or up to four other players online along with a local screen. 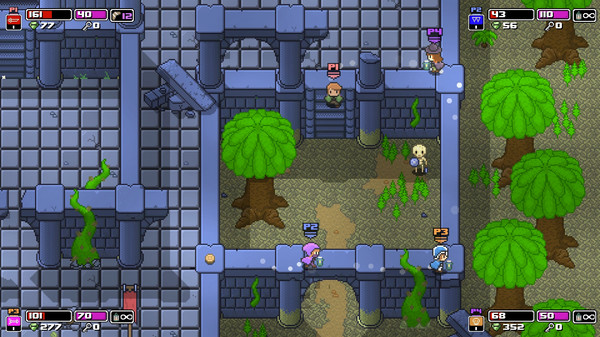 You’ll quickly learn what game this feels like due to the similarities. The classic pixel-bit combat and movements throughout the first couple of minutes bring a good nostalgia but also welcomes newcomers. Having a simple slash, dash, and block combo against enemies makes it easy to learn and brings the fun early. Picking up rocks to throw, bushes to hack through, and jumping over marked ledges makes exploring simple and fun without feeling too tedious. Mainly because there is always something you’ll need from these things. In addition to the standard of classic RPG adventuring, there are other things set up to give the game a more slice-of-life feeling. Such as fishing, farming, digging, and managing the town. These aren’t needed, but adds a level of detail and content to the game, which can make it more enjoyable for everyone. 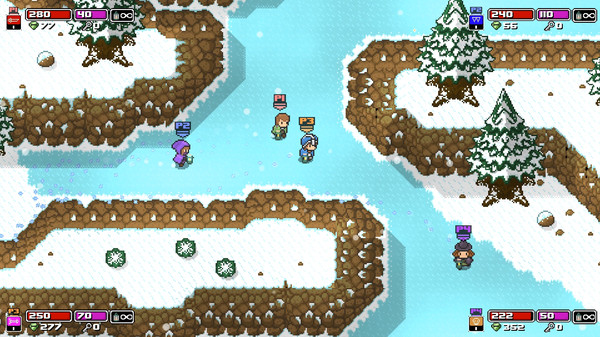 Besides obtaining side quests, one of the main things you’ll be doing is the dungeons. The dungeons each have levels to them as you delve deeper. Earning gems and monster parts allows you to upgrade your town and other stuff for your character. Such as more health, damage, stamina, and mana. There will be other things that can be obtained or upgraded, like tools or equipment to help on your adventures like bombs, grapples, or ranged weapons. During your adventures, you’ll encounter some items that will allow you to become a different class. There are several classes to create, but this is where everything kind of falls off. The class system does not bring a different experience or quality to gameplay as they all feel and play the same. Some are even weaker than the normal one you start. It’s a great idea to bring in different playstyles to the gameplay, but it was not incorporated well. Some things need more detail than others for them to feel useful or to add value, and having these classes didn’t fit the role. Instead of having a variety of weapons or other things to choose from to use in their place. It leads us to the combat, which is simplistic and great for the type of style it’s going for, but something feels off. The hitboxes of enemies and your attack feel either too short or too close, which causes a weird fighting style that you have to be accustomed to. It gets even weirder when you’re playing with some friends because if someone is doing combat, you will most likely get hit from the knockback of the enemy getting hit, and from there, it feels like just a waiting game for a turn to strike. In return, you don’t need to sit there and help fight because there are usually multiple things to do in the dungeon room, like solving a puzzle or moving blocks around, even other enemies to defeat on your own. Though, if your party fails more often, the patterns in the dungeons can get stale after figuring out there’s a lot less in the procedural part. 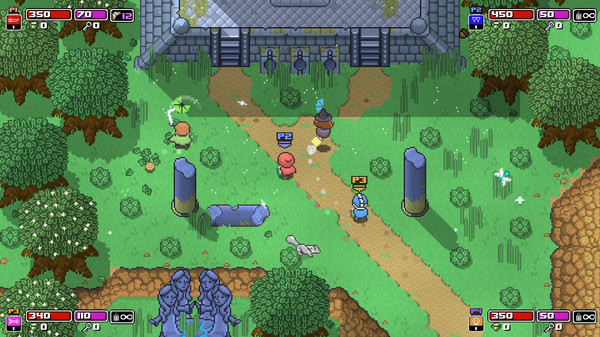 Another downfall is the earning of currency. Gems are used mostly for building out the town, which provides you the upgrades, and the gold coins, which are to be used to purchase tools or miscellaneous upgrades. Within a couple of hours, everything can be bought and used because of the amount of currency you receive just from the first dungeon and first level. Since the mechanic is when you die, you’re able to go back to town and spend what you have, this is what is most likely going to be done because the upgrade to the stats of the character you’re playing becomes extensively expensive quickly while everything else is super cheap. If you decided to do vice versa, you’re left with an empty place where you can’t advance the story or upgrade anything in the first place. 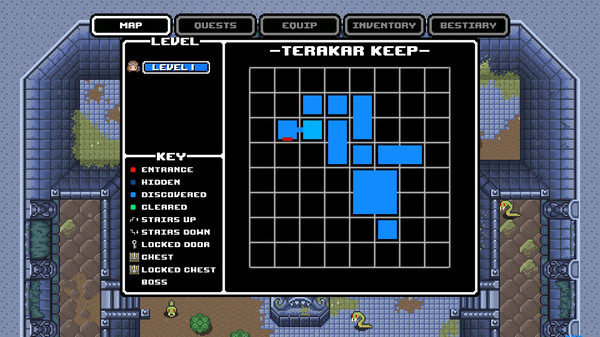 Moving on to the art style, it’s a more refined version of the pixel base with more detail and shading but still leaving it with a charm. Everything is well animated, and the effects usually all have unique properties that blend the game well. Not that it needs it, but the soundtrack is lacking. There’s very subtle and faint music in the background, but it’s very unmemorable. But just the sounds of ambiance does well. Enough sounds are bouncing back and forth from interacting with the world and entities that it doesn’t need but could add more to the experience. 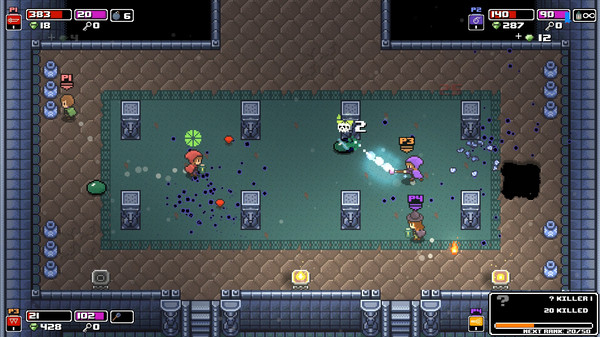 The game was a refreshing experience to an extent. A well-done modern old-school RPG, but you’re able to play with friends. On its own, it can probably get boring quickly because it doesn’t have the in-depth story of an RPG and also doesn’t have enough rogue-like experience to make replaying it enjoyable. But if you can pair it with a co-op experience, that’s where it shines the most. Adventuring with friends in the different zones or trying to survive the dungeons and choosing an upgrade everyone wants makes it a more memorable time spender. Though for those who like to play alone, it does have its perks of just being a decent game itself in its genre, which I think many people look for.

I enjoyed it though it’s another one of those games where I always ask for more. Just a bit more in certain areas that would make me fall in love with it. But unfortunately, I don’t think they’re going to refine it that much in any direction. With such few good little co-op games coming out, I feel this is a pretty good one to share several hours with friends to be worth it. If you’re looking for something to play with friends, I’d recommend picking this up on Steam for $19.99. But unless you’re nostalgia-ridden for an old-school RPG, I wouldn’t recommend it for solo playing.