A battle royale crossed with a roguelike deck builder and then multiplayer on top of it? That’s a combination I wouldn’t think existed until now. Dear reader, I present to you…Battle Bands. This game is the first to be released on Steam by the Portland-based studio Aerie Digital in Early Access. Their website claims that their first game is called The Talon Moon, but that does not appear to have been released or even have a release date in sight.

A forced tutorial at the start shows the basics of the game’s battles. Unlike most deck builders, you don’t work on depleting your enemy’s health here, though the concept at play is pretty similar. Instead, you use your turns to stitch together a musical performance based on song sections and individual member performances to generate a target amount of hype to win. Because the game is turn-based between bands, the band that started second has a chance to catch up if the first band reaches the target hype amount first. 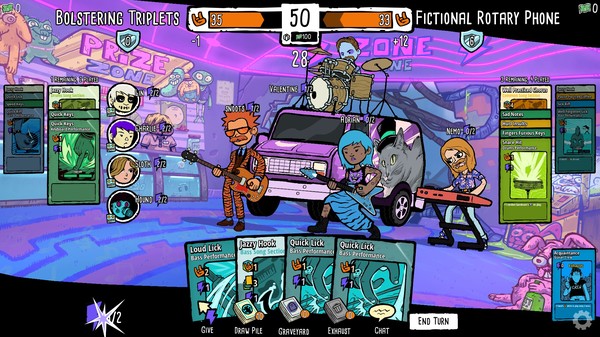 Specifically, a band member has to play a song section card before other band members can play their own individual member performance cards on top of it. Each of these cards costs varying amounts of energy to play and give different amounts of hype when played (song section cards give different amounts of hype when the section is completed upon playing enough cards). Cards also have other effects beyond simply granting hype to your band, like decreasing the other band’s hype, discarding cards, and giving your bandmates more energy.

There are two main modes in this game, and they can be played either solo or with other players, up to 4 — one player for each of the band members (guitar, bass, keyboards, drums). However, this preview will focus only on playing solo for a few reasons: the player base isn’t large for bands to be easily and randomly formed, and there isn’t usually a guarantee that I could find people online in their Discord server group up with either. The first mode is the typical roguelike mode, where your band roams a world map with random encounters occurring on a fixed map design with multiple nodes. There are many fixed enemies to defeat, but the order they can appear is completely random, only being revealed once you land on their node. They tend to have unique styles and gimmicks based on their decks and appearance — one of the enemies, for instance, is a huge slimy goo monstrosity known as the Goo Fighters (obviously a cheeky nod to the Foo Fighters — rest in peace, Taylor Hawkins), that share a larger-than-normal energy meter and play goo-themed cards. Another enemy consists of a band of dogs called the Real Good Boys — cute, but they pack a wallop and have some interesting dog-themed cards. 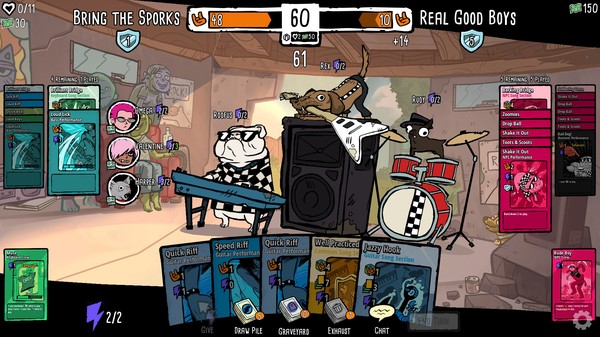 Winning a battle gives you some rewards like being able to add more cards and money to buy items that will help, but you have to do this carefully as enemies become more challenging at an increased tour level as well. You start at Tour Level 1, and completing each battle increases this level by 1. There are some fixed nodes where you can buy various items to help in battles and choice-based event nodes where you pick choices with percentage-based chances of giving rewards. Each run ends when you run out of Morale (your health), though there is a final boss battle in the center of the map, which is the outright run-ending battle as well, and that one is tough to win without a properly built deck.

This is the more standard roguelike mode in a deck-builder card game, which is great as there is something instantly familiar for deck builder veterans to latch on to. The other mode is a 6-round Royale Mode, a knockout bracket mode featuring up to 64 bands. It can mean there are up to 256 players all at one go if each band has four human-controlled band members — but more likely, this figure will be much less, and the good thing is there are still bot bands to fill in the remaining spots. You duel off against your opponent, hopefully, win, then you have some time to buy items and modify your decks (again, by upgrading, adding, or removing cards). Rinse and repeat until you lose or win the whole Royale. 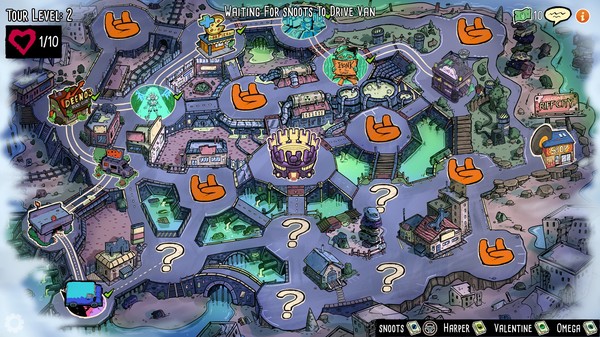 As far as difficulty goes, it’s not too overbearing in the initial stage, where it is still relatively easy to win even without an efficient build. However, the later stages (in both modes) can get rough if you haven’t structured your decks well, and even more so if you’re playing solo, as you also have to handle the deckbuilding of your bot bandmates. This game is weighted too heavily towards you playing it with your friends/other players, and it shows. It is where one of my main gripes with the game comes into play, as you have a limited amount of time to build the decks. In singleplayer, this is especially egregious. Why should I be time-constrained if I have to do everything by myself? In single-player-band Royale, this is even worse as I actually ran out of time, doing so once, only to realize to my utter chagrin that I still had to wait a lot of time for the only other human-controlled band to finish their battle.

You also don’t have every single possible card available at your disposal, and you have to play as each of the various band members to level them up to unlock more cards to find potentially. Yes, each of them. It introduces a significant amount of grind and is not for the gamers that prefer to have everything instantly unlocked upon starting the game. Battle Bands is wrapped up in an incredibly charming package despite all that. Background tracks have a nice rock flavor befitting the game’s theme, though part of me wishes that it went into heavier territory (thrash metal, speed metal, that kind of thing). Some parts of the game (card upgrade screen, royale mode waiting screen, among others) are also surprisingly devoid of music, so hopefully, that changes. 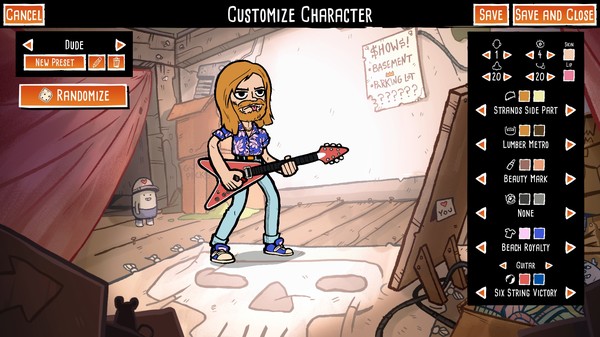 The cartoon animations are delightful to look at and are surprisingly synced rather well to the backing tracks (at least in the case of the drums, which look believable). There’s also a rather comprehensive character customization screen with all manners of cosmetics, some of which you get for free at the start or by leveling up the free season pass, and some of which you have to pay for in the in-game store. However, this might be a sticking point to some, as there are microtransactions for the currency to spend on the in-game store — but as long as the microtransactions are limited to these cosmetic items, I don’t see any problem.

Even in Early Access, Battle Bands is still a pretty fun prospect for players that love deck builders and rock music. The buy-in is pretty reasonable at the (as-of-writing) asking price of $17.99 on Steam. Try your best to find friends to play it with you, though.