Ranch Simulator is a more simple simulation open-world world game that focuses on running a Ranch. Farming sims are common and popular, so it was nice to see one solely focusing on raising animals. This is a title in early access, but my experience felt limited but not incomplete. The addition to online co-op makes it a nicer experience if you had someone to play it with.

The gameplay is what you expect as you raise animals and sell the goods you produce. You start on an abandoned and rundown ranch you inherited from your grandfather. After a quick creator, you are given a tutorial on picking up, placing, and interacting with objects. There is no inventory system in the game. Besides the radial menu that allows you to build, demolish, weapon, and open hand. All other options require the player to pick up and take that object where it needs to go. This includes workstations like the table saw. You will have to place the table, fuel it with your jerry can; with the fuel, you fill it from the gas station. You will cut trees and place the logs on the saw to be processed, and then you can take the planks to the barn or other project you are trying to build. Items you need to take to the market or bought from the market have to be put in the back of your vehicle. You start with a simple utility vehicle that did everything I needed to do in the game without worry, including going to the store. Other vehicles can be bought that can have more extensive storage. Starting can be slow as you only have a couple of chickens from the tutorial. The player can hunt with the wild animals for meat to sell though it can be odd it’s just a large revolver; it does work. This is an example of the current simplicity in early access, but it works. 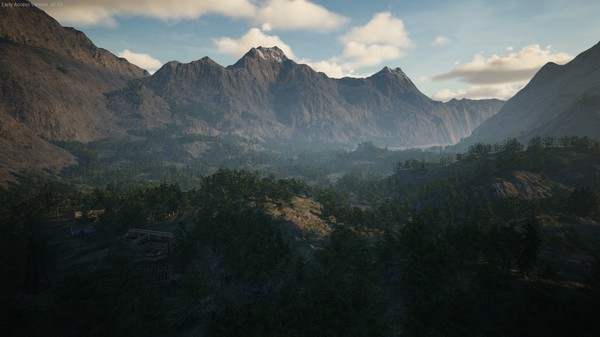 The stores have an area where you park or have items within that zone, and they will show up to be sold at the kiosks within each store. Funds are shared on the ranch but are large enough for multiple people to do what they need to on the ranch. Though I would argue the game works best as everyone works together with tasks. You don’t need to work on things like sleep or eating, but the night gets too dark to do anything. The game in the current form doesn’t have many light options to build on your ranch, and the flashlight isn’t the best. You can build anywhere on your ranch, and they give you a nice flat area to build how you wish. Once you demolish the ruined buildings and trash, you have a spot to do all you want. The most useful reason you want to build is to have some area for your cows, chickens, or pigs to be in. If not fenced in, they wander out. It can be annoying as animals seem to be drawn to open gates and doors. This was the most annoying part of the game. There will be quests to complete for money, but at the time, there isn’t much more to the game or any big goals.

You can take extra steps with cows or pigs to further profit. With milk, you can craft cheese, and with pigs, you can make and age sausages. This was the most enjoyable part to me as I got the most from my labor and work. It felt the most complete part. Some objects the player can buy felt more useless, like telling if eggs are fertilized or not as the hen would attack you if you picked it up, but you have to pick it up to use the object. Some objects require control inputs to use, like the meat grinder and well. You have to rotate the mouse in a circle to complete it. I didn’t love or hate the addition but was happy to get the more expensive options where I didn’t have to. The game is soon releasing horses and has plans to add more across all parts of the game. 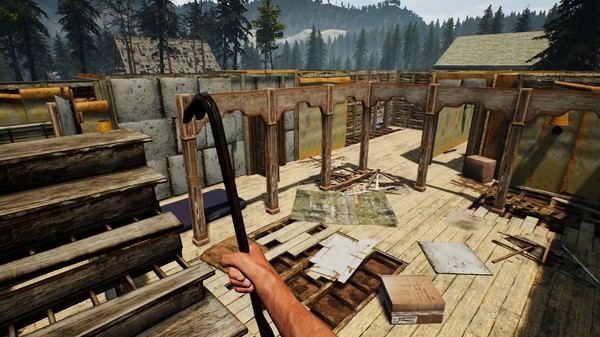 Aesthetics is the second most significant weakness of this game other than the overly simple early access gameplay. The look seems dated and simple, with an empty world and few spots feeling vacant other than a store terminal. The few people in the world are just in the stores standing still doing nothing. Animations are just as simple. There are simple sound effects with stock music on the radio in your car. Outside that, there is no music. The weather holds no issues or bonuses for the player. The silver line is there are few bugs with a simplicity that allowed me to understand and continue with what the game did have. Mixing that with a smooth-running game provides for an ok experience.

I would call this a simulator but can call it a ranch game. I can’t recommend it in the current form and would only look into it if you and another want to play it together. Overall it feels a bit bare for something to get into early access, but I could see it getting better with the foundation it currently has. The bright side is all that is there is solid, but there isn’t enough just yet as it feels very early access. I could see this one being a gem in about a year but not at the time in its current state.