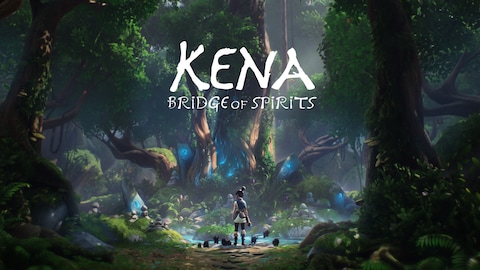 Kena: Bridge of Spirits is an action/adventure game developed by Ember Lab where you play as Kena as she travels to abandoned villages in search of the sacred mountain shrine. In her search, she struggles to find secrets of community hidden in the forest, where she comes in contact with many fascinating characters, some of which are trapped wandering spirits. Plus, let us not forget the adorable… Rot.

Kena: Bridge of Spirits is filled with an exciting story and is full of wonder right out of the gates. You start in the forest, and as you are playing through the very well-done tutorial, you are introduced to different characters and mechanics. As you move through these dark caves, you can use your pulse ability to light up the environment or use it to ping puzzle elements. You reach an area with a mysterious character who sets a dark tone in an otherwise beautiful world. There are these incredibly adorable creatures called Rot. Yes…, I said Rot and adorable in the same sentence. As you find and unlock new Rot, many of them get these wonderfully crafted cutscenes when you meet them for the first time. From the Rot to the various characters you meet on your adventure, Kena: Bridge of Spirits is a beautiful and emotional experience that truly sets it apart from other titles in a big way.

Kena: Bridge of Spirits has a fair amount of platforming and puzzles on top of the combat encounters. The controls feel very tight and are easy to learn. Platforming in Kena: Bridge of Spirits can at times feel a little clunky compared to the rest of the game, but the addition of ledge grabs smooths out the platforming. As you explore the game world, you may run into chests or destroyable objects that give you a currency to use to progress Kena’s abilities. You can unlock new weapons and items or abilities for Kena and the Rot as you progress through the game. You use Rot to solve puzzles, move heavy objects to reach different locations, and you can even use them in combat. In many combat scenarios, you have pods that need to be attacked by the Rot, and after destroying them, the environment changes. Seeing the shift in environment and growing after doing so is something that never gets old and, at times, is simply breathtaking.

HATS! We can’t forget about the HATS! As you play and explore throughout this wonderous world, you can find HATS for the Rot to wear. This adds a lot of life to the Rot and allows them some form of individuality which, well, is just gosh darn adorable. I came across a problem in the game near the beginning where I accidentally skipped a tutorial pop-up window, and I had no idea how to have the Rot move a block once I told them to lift it. I had to completely start over to be able to see that tutorial pop up again. Luckily I was only about 20-30 minutes into the game. I strongly suggest they add a section with all tutorial pop-ups so that a player can re-read them or, in my case, actually see them because of my user error. The Spirit Masks was a nice touch and one of my favorite mechanics in the game. When you find the meaning of the masks, it also adds a new level of emotional depth.

The combat is far more involved than initially expected and has many ways to fight as you unlock new abilities or mechanics. Playing on various difficulties has a real effect on how you play the game. With the easiest difficulty, you can more or less mindlessly bash things except for the combat encounters that require charged or heavy attacks or the use of your other weapons and abilities. With more significant difficulties, you will want to pace yourself and find a rhythm to your attacks, as well as learn the enemy’s attack patterns. You don’t just use the Rot for puzzles or world traversal, but they also have many uses in combat situations, such as destroying pods to cleanse the area, as previously mentioned.

The art style stands out in such grand fashion I found it hard to look away. The chosen art style is somewhat unique. I say slightly because, at times, it felt as if I were playing a Pixar or Dreamworks animation. As I mentioned before, using Pulse lights up the environment or might activate things for puzzles. When it interacts with the environment, it is just a special touch of what some people like to call “Juice”. It is an excellent touch on top of an already beautiful game. The cutscenes when you meet a Rot for the first time draw out some emotion from the player. Imagine a 6’7″ Male with a big beard all teary-eyed going AWWWW… Yea, that was me. The animations are fantastic, and the game runs very well on PC. The characters are very well visually designed, and the game world is just… *muah* A masterpiece. Indeed the game is a work of art.

The sound can be kind of a mixed bag. The music doesn’t stand out. It isn’t bad; it just doesn’t stand out or feel as inspired as other aspects of the game. The ambiance, however, really does wonders with helping set the tone for the game. Mixed with the beautiful artwork of the environments and how Ember Lab brings the characters to life, the ambiance helps create a deep immersion. Sound effects from things like the Rot cooing or laughing when you sit down to play with them or give them attention just further add to the game. I found that some sounds levels were unbalanced in some areas of the game compared to others. Still, with being a mixed bag and being one of the weaker areas of Kena: Bridge of Spirits, the sound work is still impressive at times.

In all, Kena: Bridge of Spirits does nearly everything right, making it one of 2021’s best-released games. The game feels very similar to other genre-bending games. This being Ember Lab’s debut title, they did an awe-inspiring job. When I first saw Kena: Bridge of Spirits in one of the Sony PS5 Showcase events, it was what sold me on getting a PS5. That said, I am pleased to see it released on PC because if I ever have an option of PC vs. Console, I go PC all the way. While playing Kena: Bridge of Spirits, I also had Covid and was quarantined in my home. It helped give me something to do, and being a very emotional time, the touching moments in Kena: Bridge of Spirits helped me get through it. There were many times where I was smiling and giggling over the Rot and just starting crying. Sometimes in the darkness, we find the light. Kena: Bridge of Spirits was part of that light for me.

Kena: Bridge of Spirits at time of review is available on Epic Game Store for $39.99 and is worth every penny. It is also available on the PS5. Developed and published by Ember Lab as their debut title, it is awe-inspiring, and I think the future of Ember Lab is very bright.