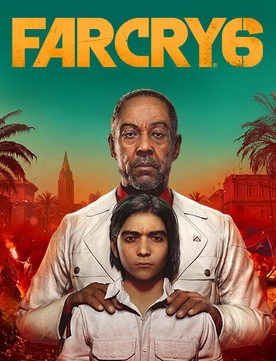 Far Cry 6 is an open-world first-person action game set in the tropical paradise of Yara. You, as the player are part of a guerilla resistance tasked with taking the fight against the dictator Antón Castillo. At the start, the play will choose to be a boy or girl named Dani and then continue in a full voice acted adventure as an orphan born in Yara, now fighting to free it. Those that have played previous Far Cry games will feel right at home, while those new to the series may feel a bit overwhelmed at first as all features, vehicles, and such from previous games are in this one. In the end, it works in favor of giving the player more tools and ways to take the fight to the enemy as they see fit. This is no doubt in my mind Far Cry 6 is the best one in the series yet.

The story in Far Cry games tends to be its weakest aspect, with the worst ones in the series being a total buzz kill or the more demoralizing part of playing the Far Cry Series. I didn’t get this same experience in Far Cry 6. The story flowed well and within reason. Instead of the player choosing in dialogue, the player’s choice stays within gameplay with the same outcome after. An example of this is the player can use stealth or go loud. Going stealth gives some extra flavor text, but the game does seem to lean going louder in terms of the music and story. Times it felt like going stealth was not recommended as the companions joining you on some missions will start yelling as if they are in deep combat, even if it’s not going on. The bulk of the story involves recruiting three major factions in a united effort against the Castillo family and regime. Once you are done with the starter “tutorial island” like area, you can freely go to the other major sections of the mainland in any order to to the story. The central storylines of each press the story and scale the difficulty of the enemies. The story is always told through papers found in areas, media playing in the background, and side quests. The story does hop from time to time to Antón Castillo and his son as he is being prepped to take over one day. During these, you gain the motives and mind of the main antagonist. The player also gets to see both sides of the cancer-curing drug being produced and what it is also doing to the people of Yara—seeing the lies being told to the outside world and the people while seeing what is going on.

Gameplay will feel very familiar to past games but takes more on the action side than an RPG style. There is a level-up system, but this is mostly for gatekeeping items in the game while giving the play a rough indicator of difficulty in areas of the game. The play will not be leveling to unlock skill points as these do not exist. Abilities are either unlock or innate depending on the gear that is equipped and the weapon equipped.

You can carry up to three weapons, one sidearm at once, and swap at will via the menu. Equipped gear can also be done the same. Combat revolves around the damage types of default, soft target, armor-piercing, blast, poison, and fire. Armors can affect the defense of these or bonuses to other mechanics within the game. Equipping different rounds on different weapons allows it to be good against various sorts of enemies. The default is by far the worst as it does below par on all weapon types. The player will often opt for either anti-armor or soft target round for those without armor. Blast is only anti-vehicle, while poison and fire are supportive but lethal to each other. Gadgets like grenades and throwing knives are slotted and unlocked through your supremo. The supremo is a deadly backpack for devices that provides an ultimate effect or attack. The default one is multiplied seeking missile attack, but you can unlock others that give attacks like an EMP to disable vehicles or a self revive medkit.

Everything revolves around collecting resources and money to advance you and the resistance. They are also vital to modding the weapons to your playstyle. There are multiple ways to find the resources and supplies you need. This also includes free intel on caches and sidequests but enemy strongholds to capture. Everything you do either has a place to further your progression or provide some worldbuilding.

Once unlocking the main camps of the factions you are trying to get on your side, you can build stalls with unique upgrades and purposes to help you gain better base equipment or armor. Some support the world by making friendly freedom fighters stronger or varied as much as the enemy. The only bumps in the open world’s design are that some places are permanently locked till you do it in a story quest.

The main base and hubs of the factions hold extra to partake in. One is a mobile game-style passive game where you collect troops and leaders to send out in the field, wait a bit, and select risks and rewards after about an hour or two. Another is doing dungeon-like areas to obtain an item and bring it back where you started, having to use water or stick to the shade to cool it off from not exploding. Each can provide rewards and unique items for the player, but It wasn’t the game’s high point, though the dungeon-style areas are best in co-op play.

Visuals and music are on point in the missions. You never lose the sense you are in a tropical paradise. The vibe is not broken on that part. Audio cues from animals, enemies, and everything can help players gain clues around them, even if they are not seen. Oddities in the sound mostly come from if the player was too quiet using stealth when the mission was supposed to be loud. I was running the game on high and had no issues running the game smoothly. The accessibility options are some of the more in-depth compared to many games on the market. Many options can even be turned off fully to give the player a more “hardcore” feel. The same options can be turned up more and many times change the colors and settings for different disabilities. The game even has many pre-set options to help better tailor the multiple options. The difficulty settings are only a normal mode or a story mode; the story mode makes the game much easier.

Bugs and lack of polish are the most significant flaws of Far Cry 6. Luckily I didn’t run into anything game-breaking, but they were highly annoying and did run into a couple of side quests I could not complete due to the NPC just staying still or frozen. I would have the key to a locked door holding a unique weapon in multiple parts of the game, but the game would claim I didn’t have the key. Helicopters I was flying in mid-air with nothing around would randomly get damaged or blow up. The same would happen with collision models with vehicles as standard fences you were breaking or bumps in the road would randomly do insane amounts of damage that did no damage before. Times the prompts to do actions like “jump” or “machete kill” wouldn’t do the action it was prompting you could do. Interacting with objects would never happen at items or would never trigger correctly, requiring multiple tries to collect something from a truck or stand awkwardly to try to open a large door you should be able to open while standing in front of it. The animal companions felt more trouble than they were worth, mostly getting in the way or ruining the flow. Even to the stealth ones, I thought they didn’t help at all. Primarily given in to dismiss and not deal with them for a better and more fulfilling experience. Due to unexpected issues like this, I was unsure if the rapidly spawning enemies were intended or not. You can control most notability at the checkpoints as enemies would constantly travel through and mostly make it feel like a warzone 24/7. The same issue would happen inside quests and areas where enemies were constantly respawning or coming to an area.

Important note to those looking to buy the game would have to be aware that animal violence is not just tied to hunting within Far Cry 6. The play will frequently have to attack wildlife or hunt for materials and kill attack dogs. An extra mini-game is cockfighting; though played like an arcade fighting game, it is the violent rooster fighting banned in many places in the world. Some may not care, but many may be off-put by having to shoot dogs as often.

Overall, Far Cry 6 is the best one of the series. Feeling like an actual action game where you can tackle most of the issues as you please and how you want. The open end feels, and flow of the story gives the play a feeling of not being tied down to go at their own pace and where they want to focus. Far Cry 6 is one of the best games to come out this year and is worth looking into if you are a lover of shooters or action games. With the number of bugs I ran into, I believe it will still be buggy even after deployed fixes. Besides that, I feel it is still worth it and was fun. It will for sure give players many hours of enjoyment as you would expect from a AAA title.