SkateBIRD is precisely what I thought of when I saw it, and luckily it was when I finally got to play it. It is a skateboard simulator with a fun spin of it being with birds and a small-scale environment. SkateBIRD gets the simple parts right with their interesting spin. The physics system gives the game a nice balance of realism with the arcade environment and tasks. 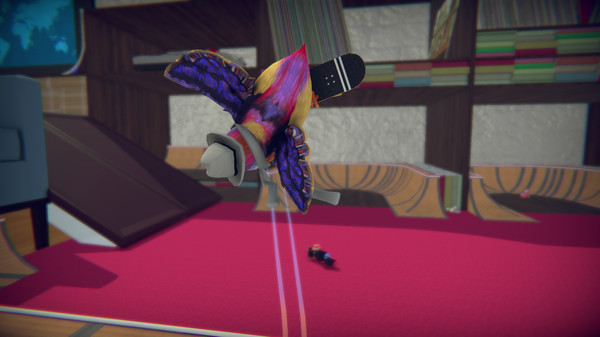 SkateBIRD does its first task well, and it is a good skateboarding game. It is a simple one, but all the elementals are in place. The bird theme is heavy, as you would expect, but they never put that over skateboarding. They both share an interesting mesh. The vibe gave me a nice mix of relaxing with times of challenge through the stages. Partly from the cute story and the well-curated soundtrack of punk songs you would expect and chill bird-themed lo-fi ones. Humorously when the punk songs need it, they are censored by bird chirps. The environment and what was used reminded me of old skateboard toys. It adds to it with the bright colors used. You start in a bedroom littered with everyday objects to make out the ramps and skatepark. It goes from magazines forming the ramps or cables creating rails to grind on. Through each area are collectibles that give you a wide range of customizations for your bird and expand the soundtrack. SkateBIRD already provides the player with a wide range of clothing for their character and includes too many birds to choose from. Including owls, exotic and tropical birds. 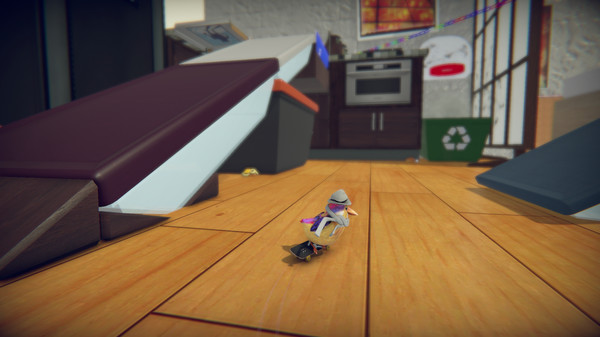 Gameplay is exactly what you want from a skateboard game, with more arcade elements coming from the environment and missions. The missions at the start help the player learn the game and controls, then lean into a storyline on assisting the human you live with. In between the story, missions are also to provide a challenge or change/add to the environment. It is also how you unlock the next area. Controls are better on a controller than the keyboard. Not surprising, being the type of game it is, but the controller flows better. There are accessibility options to auto-grind, but I felt these did more harm when doing more complex platforming. Since the levels involve more verticality than other skateboard games, the player can respawn locations and warp them at will. During missions, you will warp back to the starting location for the mission. It is greatly needed and helps keep the relaxed vibe of the game. Some areas can be challenging, and some missions can put someone to a test. The biggest flaw that the devs said they would be addressing is the camera controls to see better, as looking around can be a challenge on the move. The game does an ok job as if you will be giving a bird-like “arrow” on where the objective is, but it was hard to see it. It was more of an issue of things above the player. Missions themselves will make the player do tricks at exact spots, collect objects or get a score within a time limit. There are some more crazy missions and a story that is just as silly as the game’s concept. You go up to a bird you see in the level and talk to them to start them. The chats with the birds are also how the story progresses. 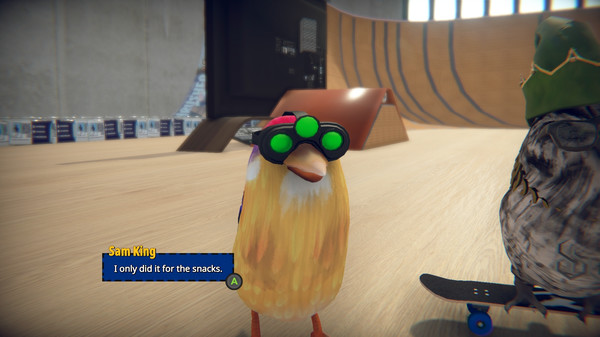 The level design shows the devs knew what they could do differently than other skateboarding games. The use of the rooftop vents and fans to launch the player and the use of random household or office objects is well done. The collectibles are well hidden but can be seen from afar if from the right angle. Half the time, you could know the exact location while trying to reach it is its challenge. Times it does seem more of the mechanics than a challenge as the transfers and jumps try to keep you lined with the launch points. Some grind points and higher areas require the ramps to access, but if you don’t line just right or move in the right direction. You will struggle to reach it or trigger it, even more so within the time limits of some missions. Some objects like bowls or bottles run into similar issues. It does add to the difficulty, but it was just clunky enough to make it not seem all my fault. The physics they used worked well and felt natural despite the bumps. Some of the objects in the environment were not working in the player’s favor as I wanted. There is no real way to “get off” your board and either fly or walk around. You can slightly roll akwardwardly when you bail from your board. I feel either would have added to exploring but would also make it easier. Having neither can make it odd to look around standing still or taking a moment to pause to decide what to do. 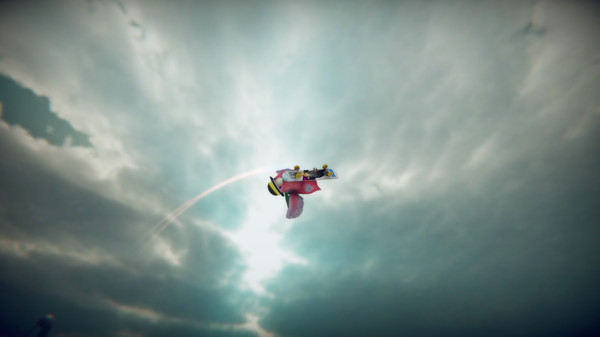 Overall, SkateBIRD is precisely what I was hoping the game to be. Hopefully, this is just a stepping stone to making a bigger or larger game with more themes or animals. I feel they could go wilder and polish what they did further. I wouldn’t have minded if they went wilder with the height or scale of the jumps than sticking to something more realistic. Anyone who is a fan of skateboarding will have to look at this one. Anyone interested in a skateboarding game for the first time will have to prepare for a learning curve. I feel this was made by people who love the other skateboarding games and wanted to make their own spin as the controls felt like classic games. Succeeding at both makes me look forward to the next one. A nice mix of new style with classic elements makes this one a happy one to own and next to other skateboarding games I love.