You’re going through life, partying at a club, working late with your CEO, or getting your new art piece in a gallery. Deciding to take a break and wind down, one thing leads to another, and you’re alone with someone. They have some kind of immaculate control of your attention. You can’t seem to pull away, entranced. Suddenly, your mind goes blank, your tongue feels like its on fire and every breath is like taking in pure smoke. Darkness surrounds your vision while your blood is burning in your veins. In a blur, you awaken, hungry, but it’s not the usual hunger you feel, it feels like there’s some kind of, a second personality is now inside you, some kind of beast. What in the world just happened? 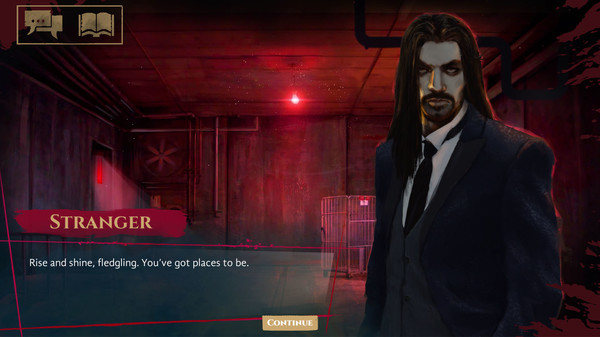 Vampire: The Masquerade – Coteries of New York is a visual novel about vampires if you couldn’t tell by the title. And also takes place in various well-known places in New York. Coteries are the main bases of the games, which is a group of people who have a common interest or purpose. They can be friends or strictly business, but will usually always back you up when you need it the most. 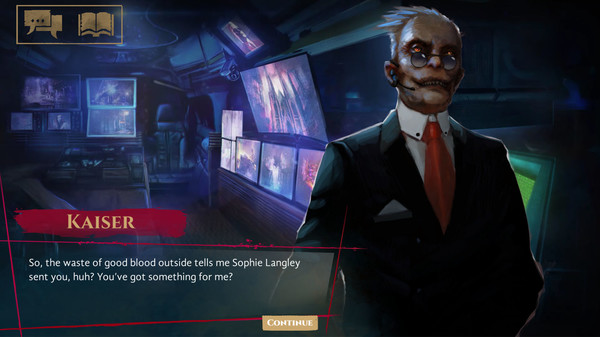 With any visual novel game, you’ll be clicking through a lot of dialogs, and there will be different choices to select from throughout the game. You’ll get to choose three separate pre-made characters with different backgrounds that start differently but ultimately don’t reflect the choices or things that happen. As you progress through the story, you’ll have a limited time to help several other vampires from different clans that have different specialties. These are the purpose of their storyline, it won’t affect your main story so it’s really up to you to find out which ones sound the most interesting. If you don’t help them through their story, they will not join your coterie. Alongside that, there will be other small questlines that you can choose to follow that, just add more gameplay to the overall game, but also do not need to be done or affect the outcome of your story in the long run. 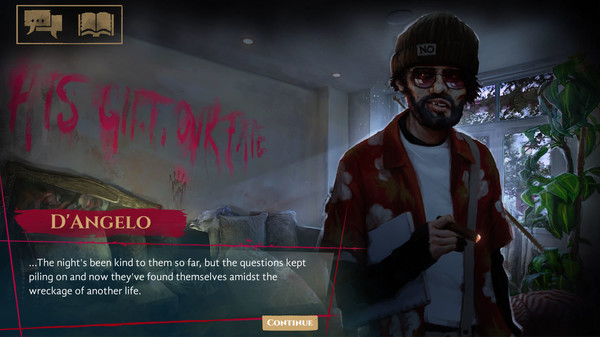 The art style has kind of a watercolor feel to it. It has detail in places where it needs to be, such as character faces, which really makes everything pop out. Though there is some minimal usage throughout the scenes. Such as some backgrounds being reused for places that are supposed to be different areas. Or characters only having one avatar for everything, no variation of emotion translating through the characters themselves, leaving you to decide how to take what they say. But usually, there is some inner dialog that will explain what the character is feeling or feels at the moment. There is enough variation to satisfy what needs to be telegraphed for certain moments, but it is noticeable because they use them pretty close with the next areas. The soundtrack and some effect sounds are the only things you’ll hear, there is no voice acting or anything that will play through when something is happening. The music does set a nice tone or appropriate mood depending on what’s happening to you which is nice to see. Other than that, it’ll be a lot of reading and clicking. 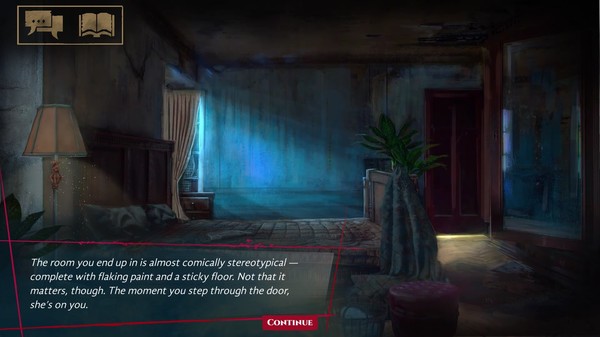 After being thrown into becoming a vampire, you are taken into the current dominant vampire clan to be tried, on your actions after becoming one of them. They have a set of rules that they follow on their occupied land that must be followed, regardless if you randomly become one against your will. They are still a secretive society that will take any measure to make sure they aren’t exposed. Which in return, becomes costly when others step out of line. Though, not every click of vampire types follows the same rules. Amongst New York, various types of your kindred also have their way of living, but hold some similarities such as not exposing themselves to the world and leaving their old lives behind. For some reason, you are in a somewhat special predicament because one of the older higher up vampire has taken interest in you, being a new face in their world could give them an upper hand in their current situation. From there, you have to be conscious of what you do and who you become friends with. Every move, friend, and the enemies you make can change how everyone perceives you. When it comes down to it, everyone is very judgmental in this underworld you now live in. 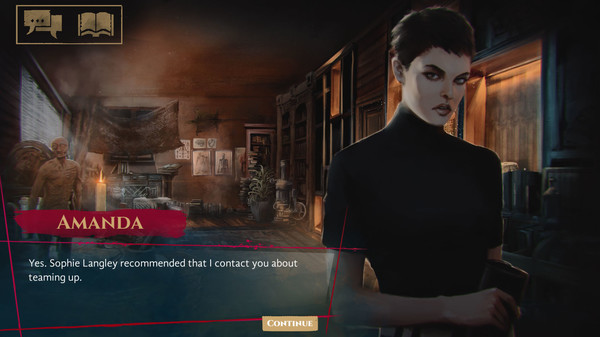 It was pretty interesting how they tied in certain characters to the modern world. This game is set pretty much in modern 2019. There are lots of references to current events, or at least in 2019 and before. Whether it be memes, political references, slang, or just current society standards. It was nice to understand most of them as if something like this is actually taking place in the real world and how most vampires evolved into the modern-day. Also, how they implemented archetypes into how different vampires would blend in. Such as Nosferatu, ugly, cave-dwelling vampires, usually take forms of bums or have jobs that don’t have many eyes on them. Vampires with more psychic abilities might do well in more technology-based areas. It was all interesting, but kind of cliché at the same time.

Honestly, for myself, it was hard to get into at the start because it was a bit too edgy for my taste. It could be a normal thing for vampire-themed games or novels. But it felt like every stereotype of how you’d think something in that genre would start off as, which was cringey. It does blow over soon enough into more of something that I could get into at least. This game in the series is short, and you can pick this game up for $19.99 on Steam. Even for vampire and visual novel lovers alike, I’d suggest getting it on sale. Half of the series isn’t made by the same company either and is about a decade older too. So some may have things that don’t even tie into the series as a whole.