What would life be like in a not-so-distant future where technology is an essential part of life, Where every place is survived and interconnected digitally? Song of Farca takes this question to an interesting place and tells a strong story with it. Games with an investigative nature have their audience and conventions. Song of Farca takes these concepts and adds a digital twist. The real question here is if this is a journey worth investigating thoroughly. Let’s do some snooping around and find out.

The story follows Isabella Song, Izy, a private investigator living in Farca. She’s just been given house arrest for an incident during a prior case. This means the entire game is set in Izzy’s apartment. You might think this would be a challenge, finding work while stuck at home, but technology is so prevalent in this society that Izy can do all her work with her computer.
The main game interface is split into four main parts. On the left side, you’ll see your email inbox which collects email messages relevant to each case. The right side is your phone directory, which holds relevant contacts. The bottom shows a map of Farca, highlighting important locations for investigation, and the top shows a real-time feed of Izzy’s apartment. When selecting a location, the screen changes to show a top-down view of that location with markers that will show items that can be interacted with. These items indicate everything from cameras to drones, phones to computers, and everything in between. You’ll be collecting useful data by interacting with and investigating these icons. 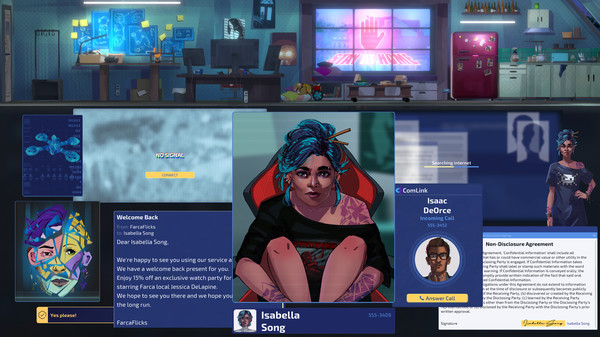 Exploring each location thoroughly will be the key to success in this game. Some of these will be very simple, while others can require some light puzzle solving. An example of a more complex clue might be having to activate a device, causing a guard to move out of the way so you can slip a drone in to gather a vital clue. The most complex ones require you to activate multiple devices in the correct sequence to move multiple guards away from your target. Notable text-based clues are highlighted, making them easy to spot, and items of note that need more work to fully solve the clue, giving notes about what to do with them or how to proceed. The difficulty here does not lie within the gathering process.

The second portion of the game involves using the clues you find in each area to extract information from relevant people by countering their lies with evidence that proves otherwise. In these sections, you have two types of clues at your disposal. The first is the raw evidence, the items, and pictures you dug up during your investigation of each area. The second is a bit less straightforward. Instead of providing raw evidence, you can combine two facts to come to a deduction about other facts related to each case or conversation. These deductions, when confirmed, also appear in your information network for the case. There’s no reason to aim for perfection though, as you can attempt each counter as many times as you want without any repercussions, and when you finally breakthrough you’ll be given even more clues, information, or a new connected location to explore. 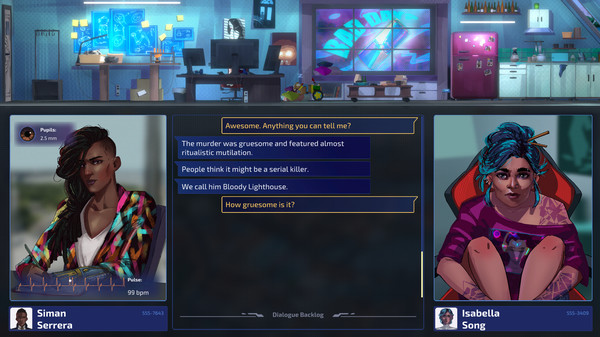 I’m going to step into the presentation portion of this review right quick before hitting on the story, as that’s where this game leaves its biggest mark. Sounds are basic but quite fitting. From the sounds of the computer whining away to the occasional movements of Izy’s dog moving around her apartment. They set the perfect tone for working these cases from home. The visuals are crisp and clear, making relevant information easy to find. Finally, we get to the weakest part, the music. There are only around five songs in the soundtrack, but they all fit the aesthetic of this game. You’ll probably find yourself muting the music partway through the game, as listening to the same songs on repeat can get a bit grating on the nerves, especially when replaying the game, which this game begs you to do.

The game consists of only about 5 or 6 cases, but each case is more complex than the last. Near the end of each case, you’ll be given a decision to make. These decisions have a broad-reaching impact though. Not only in how the current case will end, but also in the events that happen throughout the rest of the game. There is not a clearly defined “right answer” either, making every choice feel meaningful. You’ll be asked to walk the line at times, taking a journey straight through the moral grey zone. One case has you digging up info on a person who’s been blackmailing a comedian. At the end of the case, you have the option to send the blackmailer’s details over to the client and let the police handle it, or make the kind of backroom shady deals to get them to back off, either way, you’ll complete the mission, and your choice will affect things down the road. 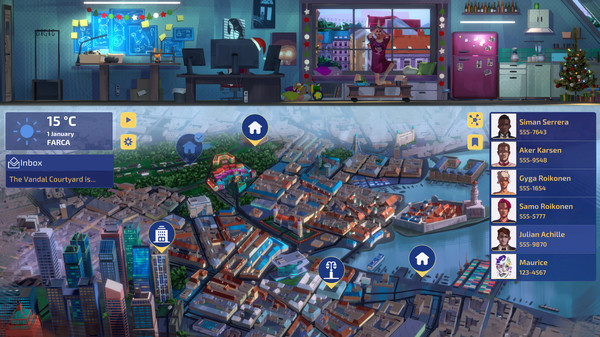 Izzy can come off as a bit harsh at times, but that’s her job. You’ll see the full breadth of emotions from her, and her dialogue is well written. Every line only serves to build her character, and even when you have multiple routes, they all feel like a path she would take. Certain passing comments made and even the tone of each line gives insight into her struggles and helps you understand her more as a character.

The options menu is overall quite bare by only giving options for audio volumes, screen resolution, and whether or not the game is fullscreen. This is fine, though that’s all you need for a game such as this. The game is entirely controlled with the mouse, making one-handed play very possible. As far as visual challenges go, the game works well alongside the standard magnification that comes with Windows, meaning you can zoom in if you need to. The UI and text elements are nicely sized for most people, but due to my visual challenges, I had to use the magnifier. The fact that it works is honestly a pleasant surprise to me. 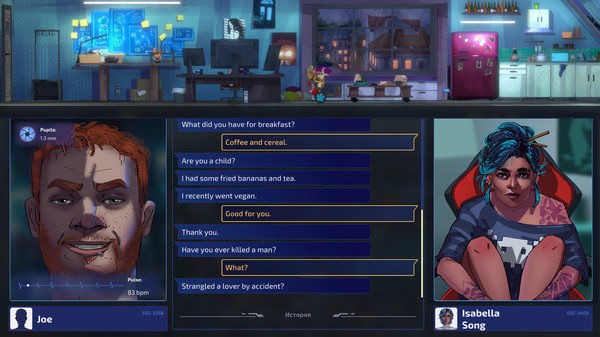 To wrap things up here, I must mention the game’s multiple endings. Each choice made will have some effect on the overall ending you receive, and they’re not all that one would call good or bad endings. In most cases, they’re mixed, with some good events and other bad events occurring based entirely on the consequences of your choices. The game begs you to replay it and analyze every inch of this grey moral zone to find out where your morality lies. I honestly love this approach, and by extension, I recommend giving Song of Farca a look if you like to dive into good mysteries and investigate what it means to live in modern technological society.

Grab this one quickly if you enjoy good mysteries, solid investigation gameplay, and having enough text to read to keep you busy for quite a few hours.