It’s not every day that a game can showcase a menial task. For example, examining passports as a border patrol guard, or digging through the personal files of people in a dystopian future, and yet two games have already done so. If we apply this same concept to being the director of the nightly world news, we arrive at what Not For Broadcast is at its core. It could be compared to FMV games of yesteryear, but it’s so much more than that. This is one story worth covering.

The gameplay has you stuck behind the video control booth of everyone’s favorite news channel, deciding what to show on the news. In most cases, you will have 2 or 3 cameras to cycle between, trying to keep the audience from getting bored. That’s not all though, as you must also select the ad’s that play and even choose which pictures are shown. Your choices do matter though, in one specific instance, a professional sports star that was caught leaving a bar gives you two choices. One has him enter a new relationship, while the other sends him to rehab for alcoholism. 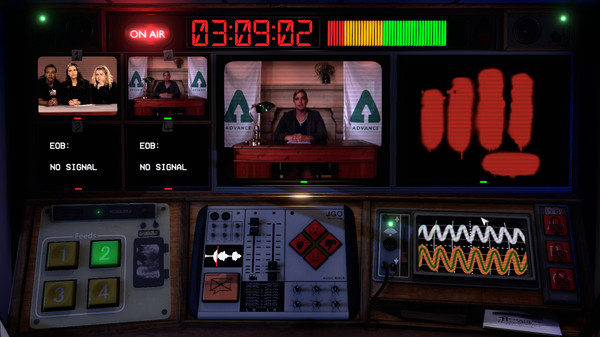 Running the nightly news is no simple task though, as sometimes things happen that should not be shown to the public, and foul language must be censored. On top of this, you’ll need to deal with interference interrupting your broadcast by adjusting the position of the antenna. There’s a lot to pay attention to, and while missing a word or remaining on the same camera for too long can cause a hit to your ratings, that interference can shut you down faster than you can ask what happened.

Your primary goal, as is the goal for most news broadcasts is to gain as many viewers as possible and make lots of cash through the advertisements you choose to run. The cash can later be spent on upgrades for your station or random decorations that don’t do anything. Every choice has consequences, more so than in any other game that has made this claim. Multiple playthroughs are required to see everything, though there is an archive that collects the choices you have made throughout all your playthroughs into one place so you can see everything you may have missed. 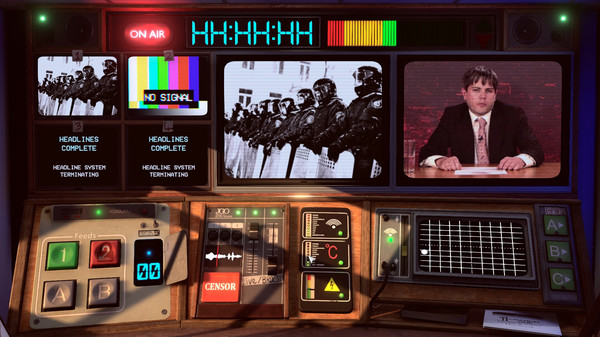 Within the archive, you can watch your completed broadcasts as they were shown to the public, or check out the interesting bits you chose not to show from each of the four cameras. You can even go back through the ads you choose to play. Many of these are over the top or satirical of traditional advertising, which makes them a joy to watch. There are many hours of video footage to pour over if you’re looking for the full story.

In between newscasts, you’ll be selecting choices in a visual novel style. This reinforces the point that you’re playing the role of a real person living in the world depicted in the game. These choices have little effect on the broadcast sections though, they may greatly impact the ending you receive. There are times during these sections where you will be asked to choose sponsors, though. These choices matter and will see you get more or less money for running certain adverts. 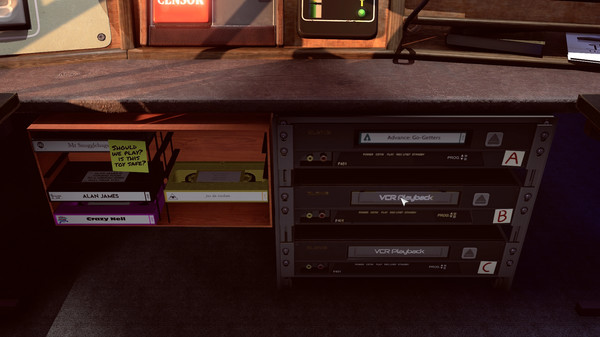 On a technical level, some people have mentioned bugs while running the game in Windows 7, but these bugs have since been patched. The developers are releasing weekly patches to correct issues and add new features. I found no performance issues with the game and thoroughly enjoyed every moment I spent deciding the fate of the nightly world news.

The developers are very active in the game’s official forums, discord servers, and social media. This is awesome to see and very important as the game is still in early access, with only the first chapter currently available. They have stated that the filming for the second chapter is presently underway. The first chapter consists of 3 broadcasts, including the prologue, however, the story is well worth keeping an eye on. 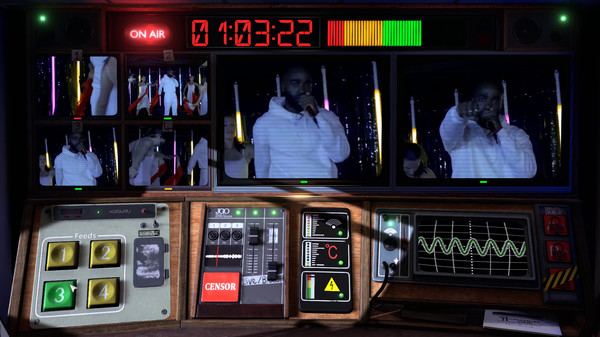 It starts with a balancing of wealth and gets even more twisted from there. A new organization called Advance slowly takes more control of people’s lives, but not everyone goes quietly into this controlled state. Just like in our history, the news becomes the propaganda battleground for both sides, and it’s up to you to decide what to show and what to hide. As we only have the first chapter, many questions have yet to be answered.

On a final note, the game is completely playable with one hand, provided you have around five extra buttons on your mouse. As for low vision players, the dev team has expressed interest in making more keyboard commands available to limit the amount of pointer chasing you may be done by adding other sound-based cues to assist in certain notification scenarios.

As the game is still in early access, I do not feel confident giving this one a final score. With only three news sections to play through, there are a lot of unanswered questions, and with such a focus on the story, it would not be fair to grade the whole story on the first few chapters. I have greatly enjoyed what I have played so far and will most definitely be back with a follow-up after the final chapter has been released. If anything I’ve said here interests you at all, go grab this one as soon as possible.