Imagine ten million years in the past, where our human ancient ancestors started to evolve, think, and create. Constantly in danger, while trying to be able to survive against animals, we can’t imagine living with today. Through unfortunate trials and error, they will grow from figuring out different paths that lead us to who we are currently. But the real question is, do you think you can follow their footsteps and figure out the methods of how we came to be?

Ancestors: The Humankind Odyssey is a kind of an open-world survival simulator. It has a bit of realism and exploration. With a sprinkle of adventure and action while going along your journey. 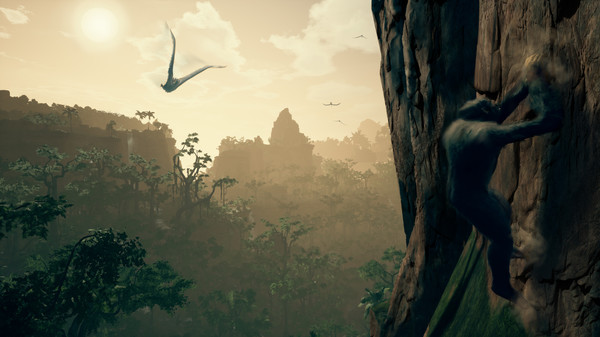 You’ll be thrown instantly into the world as a primate. Depending on what you chose at the start of the game, your experience will either have no help at all or little at most. That means figuring out visual cues to figure out if you’re hungry, thirsty, tired, or about to die. Or have something that at least tells you those things. There isn’t a goal besides evolving by slowly figuring out what you can do with the environment while also surviving. So, you have to try and make sense of taking a rock to see if you can sharpen a stick or using a certain plant that may stop your bleeding. It sounds easy since, as the player, you could make these connections pretty easy since, well, we’re the more developed version of them, but from their perspective, it may not be something they even comprehend at that point. This leads to one of the core aspects of the game, which is, using the neural system to learn different things from just randomly doing things on your adventure. To fill this, you have to do activities that will fill these neural links to different evolutions. Standing more will unlock potential in a tree that could lead to more standing related evolutions. While using your hearing or scavenging more will unlock those types of evolution trees. Other things will passively come to you, such as different metabolisms for different foods or become more athletic. As time progresses, you will age, which means you have to pass down what you learned or unlock to your next of kin, which only has a small chance of actually being passed through. Starting with a clan of a few other primates, you have choices for mates, but all skills are shared unless you have a new baby, which will start from the beginning again and also will have a chance to have one of those skills passed down. The game is a constant cycle of this, such as life. Though note, you don’t get to do or take paths that might create something else from what we already know about our ancestors. Only the path to what we are today.

While trying to survive the wilderness, you’ll be able to use your senses, such as intellect, to observe objects to figure out what they are, and maybe try to make use of it. One of your other senses is hearing, which you can use to make distinct differences between dangerous animals or maybe a new potential clan member. And of course, while exploring, you’ll be doing a lot of climbing and memorizing locations for landmarks. This will make it easier for you to get to a place that might have something you need, such as food and water, or to stay away from a perilous location. When you venture out farther, you must face your fear of the unknown by examining various objects that will make you more comfortable if not, your ape will be overwhelmed by fear and run back to the clan. As you get farther away from your clan location, you may need to make a new spot for everyone to stay. Because it will take longer and longer to get back to more you explore. From there, you can take any number of your clan to establish a new home by building new beds and make sure there is a water source and food around, so everyone survives. If you do not procreate or keep your clan going through the motions, you’ll all die out, which will put your game to an end. But besides just trying to move your clan to a better spot, so you don’t have to waste energy and time going a far distance, exploring doesn’t feel rewarding or add much to even try and explore. Why venture out when everything you need is already in one spot, and anything different is just a variation of something you already have that doesn’t help you? 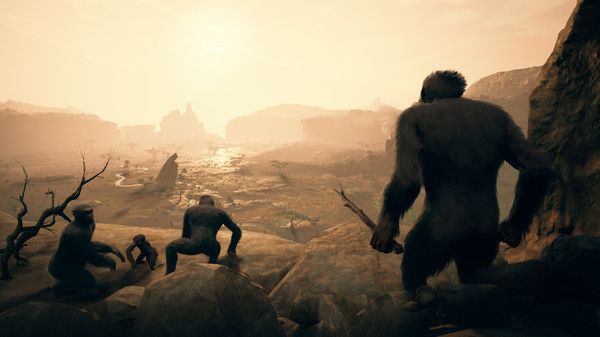 It’s not a bad or good looking game it’s kind of in the middle. It does enough that it doesn’t hurt to look at but won’t amaze too much when traversing around. There isn’t that much detail in things, which isn’t needed but is very noticeable. But the audio effects and music are pretty well done. For something that is supposed to be a realistic rendition of how our ancestors came about through millions of years, I’m glad they still implemented some music to various biomes or different music for various moods such as fear, fighting, and calmness. It probably would feel weird and too eerily quiet, even though that’d be more real. That shows how much sounds can impact gameplay. The sound effects are sometimes the usual animal noises, but they’re real enough to keep you in the head of your primate. Such as sitting and eating, then hearing the slow snapping of a stick behind you, only for you to realize it’s a panther about to pounce.

This is the rough patch of everything, and that’s the mechanics. This game prefers controllers, but there are no problems with setting up key-binds or using a keyboard and mouse. The problem lies within how the controls are put together. The first is the running mechanic. It’s attached to the jump. You hold down a button to sprint, but as soon as you let go of the said button, you jump. You cannot separate the two, and you cannot make it different in any way, such as maybe toggling it some other way. This is a big problem mainly because if you want to make any progress adventuring, you go faster by climbing large trees and traversing between them. Holding the run button so you can climb faster is a common thought, but if you happen to be looking in the wrong direction somehow, you will jump to your death. And this happens way more times than not. Next, we have just exploring and interacting with stuff in general. Some of the descriptions of the neural skills don’t seem to do what they say such as memorizing what certain objects are. Most of the time it’s just sitting there and looking at blank squares to see what they are which there are a lot of the same things everywhere you go. So instead of seeing these already known objects, you can’t do anything with them unless you sit there and look at them again. Then we have the overall progression of your skill tree. You have to constantly do these repetitive tasks to even gain, what I’ll call a skill point, to even progress. Like leveling, but you don’t gain anything since you have to do this again for any newborn to even have these skills. This leads us to what you’ll mostly be doing all the time instead of enjoying the world or figuring things out on curiosity since much of what you can do are locked behind something you have to have first. Just repeating these tasks over and over again so you can try something new. Other things such as quick-time events for making things, slow motion for dodging or fending off a predator are fine and are welcome. The A.I. for the other primates that follow feels very underdeveloped, doing stuff in a group or just trying to get somewhere with another ape is a horrible experience. From just walking into predators head on to just not sticking near you at all regardless of how dangerous it is or not. There aren’t commands or anything to help get people moving or for doing anything. 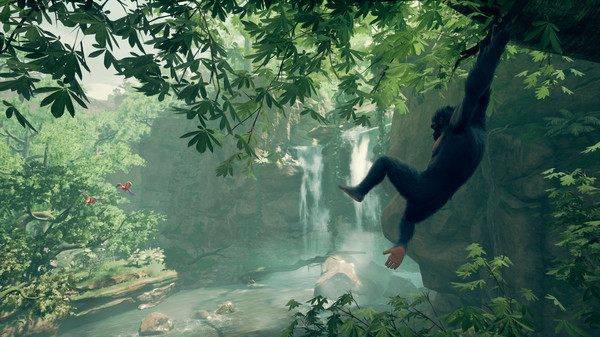 When I first laid eyes on this title, I was very interested because it seemed like an intriguing concept. But I quickly realized it wasn’t what I imagined, even when looking at the gameplay. I enjoyed some very interesting ideas they implemented, but at the same time, it felt kind of empty. It’s weird because I cannot tell how I feel. It wasn’t really fun as a game itself, but it was a good simulation for what it was going for? One thing you’ll notice is that this game will not hold your hand at all. That’s a plus in my book, but you also can’t just do what your imagination wants, only what they know at the time. Since you can’t just think of what you can do and are limited due to your brain not being developed in a certain way, you’re stuck with a kind of bland experience of realistic evolution. This is why I say it does it well if you look at it from that perspective. I’m not sure what you could do to even make that a fun experience unless that specifically what you’re looking for. The whole point is to just make progress through evolution and see if you made the same evolution on the timeline as in real life. Doesn’t matter if you did or not, the game will just put you back to where you were depending on if you want to continue in your progression or not.

Avorok gives Ancestors: The Humankind Odyssey a Drastik Measure of 6.8 out of 10 (68)

It was interesting at first and exciting. But that doesn’t last more than maybe a couple of hours. This reason could be me, or the things I listed beforehand, but it just felt like either it was done too well or is missing somethings that make it more enjoyable as a game itself. You can pick up Ancestors: The Humankind Odyssey on Steam for $39.99, but I recommend snagging it on a sale 60% off or more. I feel this is a very niche survival simulator type of game. Especially if you aren’t used to games holding your hand.