When I first heard about Godfall during E3 of 2019, I was super hyped and was almost disappointed until I found out it was coming to PC through Epic’s game store. Since then I was following the progress of the game and was very interested when it first launched. I finally had the chance to put some time into the game and now find myself without the drive to fully complete it. Let’s break things down to find out why.

The basic story follows very generic revenge while saving the world plot. The protagonist was betrayed by his brother, who now wishes to use an ancient artifact as well as a ritual attached to it to become a god and rule over the entire world. There is never any discussion about how things were before the betrayal, though the artifact and its many mysteries and history take center stage. Your first task is to reach the sanctum, your home base for the rest of the game. This is where you unlock your various valorplates and test your builds in the training area. We’ll cover this more in future paragraphs, but this is the first step in the story. 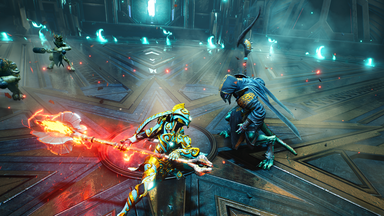 Your path will take you through the entire tower, which is itself the artifact mentioned above. From the wilds around the tower to the top, you’ve got a long road ahead of you. Each mission leads you to one of the realms which make up the tower itself. These are just basically equivalent to worlds, areas, or continents in other titles. Each realm has a unique feel to it. The themes fit well, and the visuals of each location are beautiful. There are many missions to complete in each realm, and you will find new starting points in the form of beacons, which you activate as you traverse each area.

The game is a looter by nature, so you’ll be finding tons of goodies in chests, and as drops from enemies or mission rewards. Many different additional effects can appear on each piece of gear, which will either assist or hinder your chosen playstyle. Each weapon type feels different enough, but every sword will feel like a sword, regardless of the added effects on it. This lends itself well to choosing a weapon or two that suits your playstyle and rolling with them. Each piece of gear also has a numerical value attached to it. Weapons have a power value, though trinkets and accessories have a defensive value that determines both your defensive prowess as well as how much health you get back when you use a life stone. 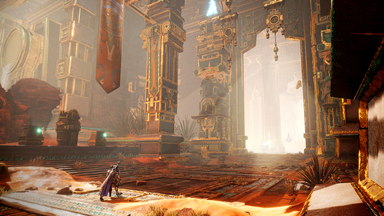 Life stones are collected during gameplay, and you can hold a maximum amount of them. They are always used if you pick one up without full health, but you can bank them if you are fully healed when you collect them. These are consumables, but you are refilled to your max amount at the start of each mission, so there is no reason whatsoever to hoard them away. Use them as much as you need.

Enemy variety is not the greatest here, but all the enemies you come across fit the theme of the area you fight them in. The exception to this is the standard soldiers you fight on your way through the realms. They are all uniform and honestly uninteresting to dispatch. Bosses are unique and challenging right though towards the end game, they become harder by adding more minions to deal with. Most of the difficulty in later areas and difficulty levels are how many things you have to watch out for as you battle each boss. Minor enemies are pushovers on all but the highest difficulties, where they hit like tanks and take numerous slashes to destroy. 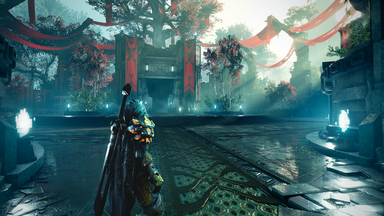 This leads me to the next problem with the game. There is not a whole lot of replay value, and the challenges offered at the end game are not unique enough to make players want to tackle them. They’re all just rehashed fights with even more adds and some unique mechanics designed solely to test your patience. The first run-through of the story is interesting enough, but for a game like this that wants people to keep going long after the final battles are done, there’s just not enough here to keep the fun alive.

On top of this, there are some areas in certain environments that cause you to get stuck in place. If you get into one such position, the only option is to return to your previous checkpoint, possibly making you travel through a few minutes of gameplay again. Thankfully, enemies do not respawn if you do this, so it’s only a minor inconvenience, yet the problem remains present. 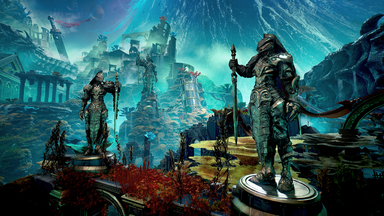 There are not many accessibility options to be found in this title. You have some minor ability to remap keys if you’re using the keyboard, but gamepad remapping seems non-existent. There are subtitles, and the text size is decent, but not amazing. Other than this, there isn’t anything else for accessibility. Sound, music, and voice do each have their audio sliders, so that’s a plus, I guess. The other options found within the options menu are about what you’d expect to find usually, and I’m happy to say there is quite a bit of granularity in the graphical options to best suit your PC specs.

During my time with the game, I found myself running around in circles and missing obvious things due to the lack of low vision accessibility inside the game. Enemies are easy enough to hear coming, with their callouts and the shift in music, but exploration is quite difficult. There are action icons that can be found in the world and hovering your crosshair over one and holding the designated button lets you jump across gaps to reach otherwise inaccessible locations. Unfortunately, these icons do not have a sound cue of their own, though there is a cue to let you know you’re hovering that crosshair over one. This makes finding them quite difficult, or even knowing I needed to find one for that matter. I also found many of those above-mentioned places, where you can get stuck in the environment mostly due to pure chance while trying to reach the many collectibles and chests dotted around the world. This was quite frustrating in itself, causing me to quit and take breaks a couple of times. 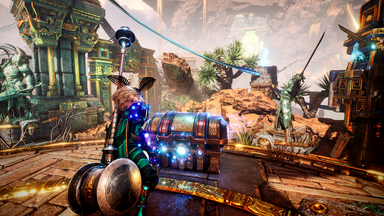 Boss fights felt brutal, though thankfully, in the main story at least, the boss retains its health bar if you die, meaning you can eventually smash your head into it long enough to get the kill. On later difficulties, though this isn’t an option as you have a limited number of attempts to clear each mission. As for normal enemies, they were cut down without any issues at all. I found myself heavily utilizing the special sight in the game, which highlights the chests, and collectibles quite a lot to help me found them easier, and I am also thankful that some of the collectibles have audio to let you know when you’re close to one.

To sum things up, though the game is solid on the first run-through, there’s not much here to keep you around for the long haul. This is problematic for a game that touts multiplayer as the main feature. I also feel it is important to note that I did not make it through the main story due to the above-mentioned challenges, and quite frankly, due to the flaws I found with the game unless I find someone to play with, I don’t ever see myself doing so. I found myself more disappointed with the game than I hoped I’d be.

Good for some fun or a first playthrough, but it won’t hold your attention long term. Also, probably better to play with friends, if you can find someone to play with. It’s just a mediocre experience at best, and at worst, a bit on the frustrating side.