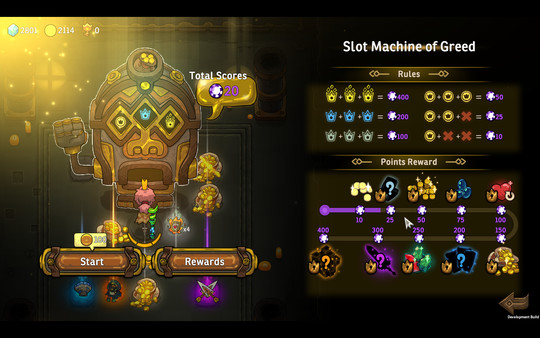 Crown Trick is a turn-based combat rogue-lite where you venture into nightmares while being guided by the living magical crown you wear. Crown Trick is the newest game that is made by NEXT Studios that have had a god streak of well-made games, and Crown Trick is no different. Crown Trick uses the normal rogue-lite elements most like it uses but adds in a sense of order and reason to the random items to give the player to build-up in a run than just trying to acquire the rarest or everything. The turn-based combat system allows the players to use all the abilities and weapons fully on your runs with mechanics that feel very rewarding for planning. 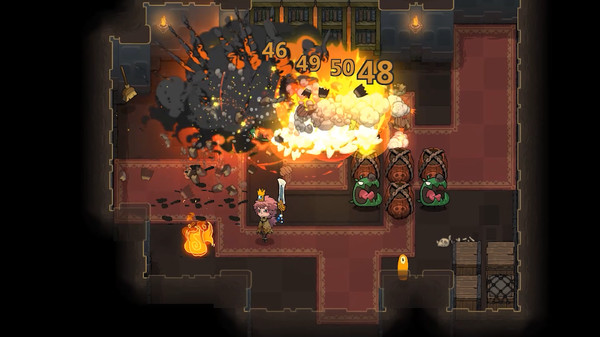 Crown Trick’s story is basic, and to the point, you work with the crown to master the labyrinth in the nightmare. While the story is fitting, the true drive of the game is its style and gameplay. The art itself is cartoony and fun while it is set in a dark tone. The contrast with the smooth animations makes Crown Trick feel amazing and fluid, even if it is just turn-based dungeon crawling. The music fits perfectly with the eerie nature of the realm you are in as well. Everything is taken as turn-based in combat but doesn’t feel turn-based when moving around. Every action or step counts as a turn. This gives the game a sense of only being turn base in combat but allows the player to handle debuffs or anything threatening outside combat in a planned manner. Weapons come in the forms of sword, axes, gauntlets, pistols, rifles, and staves. Each set can come in a wide range of elements, abilities, and rarities, but all attack the same number of squares and contain their own restrictions. Like how rifles and pistols have to take a turn to reload. Elements play a big role as most traps and ground hazards are of an element that can mix with other elemental attacks to create extra effects, or you can just use the single element to use the debuffs they create. Oil makes the enemy take more magic damage as water makes the enemy take more physical damage. To provide more options for more powerful abilities and spells are the familiars. The familiars are mini-bosses you defeat on floors of a dungeon and gives you two abilities to use, and you can equip up to two of these as you find the right object in the dungeon. Combat itself adds a shield mechanic on enemies that feel rewarding to tackle. Attacking enemies lower their shield, and when it breaks, they become stunned. Chaining this event on multiple enemies and shatters more shields in a short time provides massive damage bonuses and refills on your teleporting like brink spell that doesn’t consume a turn and your mana. The tactics you exploit bring large rewards while making bosses feel easier to tackle if done correctly. Loot itself usually comes in the form of weapons and relics that can be randomly found in chests and enemies. 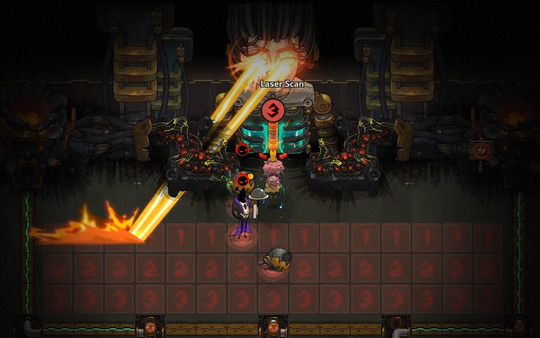 What makes Crown Trick more tactical is they give you a choice from a list to pick from about half the time. Relics and Weapons rarely feel “forced” to use as you can pick and choose. In many cases, I have found a rare weapon but stuck with my uncommon version just by its synergy I have been creating as I find more. The currency of gold and gems help the player pick and choose as well. Gold is used within the dungeon to risk at events or buy from a shop after every floor’s boss. The shops provide a wide range of consumables, relics and, weapons that make saving gold for it a reward on its own. The gems collected are used at your base. You run into other friendly people in the dungeons that then join your base to upgrade each future run. You can use the gems on an upgrade tree of each NPC that makes your potions, consumables, weapons, familiars, and currency gain better. I never felt a failed run felt useless as the more I did, the more I could upgrade and go further the next time. Bosses of each floor feel unique, and the final bonuses of each feel daunting and rewarding if correctly mastering the turn-based combat and the game’s mechanics. The only flaws I feel in Crown Trick come from these boss fights, as I feel you need to abuse stun mechanics more than the other elements or features. This leads me to use the same few familiars making the choices more restrictive if I really want to “push” through the next boss. Some weapons feel more lackluster as rifles and pistols are more niches in their roles than other weapons to tackle the wide range of enemies and with the combo system. 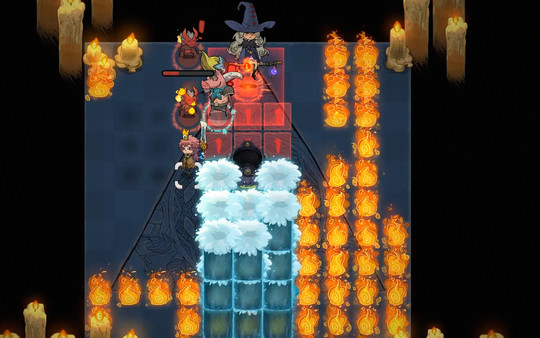 Overall Crown Trick is a must for anyone seeking turn-based combat in a rogue-like game. They hit it spot on with the degree of fun and challenge. You get the sense of the RPG while using it to slowly build how you want to play on the current dungeon dive. I feel many will use Crown Trick as inspiration in their own rogue-likes as it does the turn-based combat right by making it very tactful without making the player feel they are just not getting the “good drops” to defeat the run. The care put into the style is just as much put into the gameplay to be a game. I happily would recommend to many of my friends.