GTFO is a 4-player co-op action horror FPS. You and up to three friends, are forced to explore hostile and disturbing underground environments, searching for the things the Warden has tasked you with finding. While searching for these items, you and your team will need to avoid a plethora of monsters while finding useful items to keep you and your party alive.

GTFO is viewed from the perspective of four prisoners, each of which, is kept in hydro stasis units between missions. Each mission, the prisoners drop into what is known as “the complex”. The complex is an old abandoned underground research facility, where an accident left the environment in ruins and is now inhabited by humanoid monsters. It is unknown how these monsters came to be inside the complex, but as you explore the world you begin to realize that these monsters have more in common with humans than you are comfortable with. 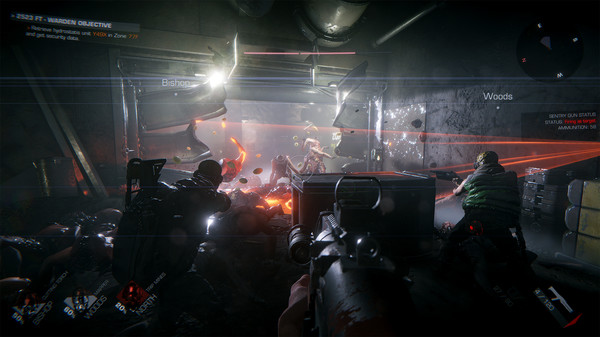 Entering a GTFO mission is not like entering into other horror survival game lobbies. Every few weeks or months, a new “Rundown” is implemented into the game. You can think of Rundowns as seasonal content, where new levels are added, and old levels, are removed with each new rundown. Rundowns in GTFO are extremely varied, with multiple expedition types included. Each expedition within the rundown is unique and is often experimenting with new ideas and concepts. For example, Rundown #4 introduced new expeditions, layered difficulty, and new gear. Additionally, each time you play an expedition within the current rundown, the layout of the map is randomized. This helps add additional replayability value to the game for the fanatical players beyond what is typical for a game with seasonal content.

When a player first enters the game, they will notice that most of the content in the rundown is locked. Players will be able to dive into the first level(s) of the rundown and will have to complete all level ‘A’ expeditions to unlock level ‘B’ expeditions. Currently, the main mode of play in GTFO is with premade lobbies, however, they recently implemented an alpha matchmaking system. GTFO does require quite a bit of communication, so it is highly recommended that the first few games a player plays should be with a premade group. Additionally, the game currently does not have scaling difficulty implemented, so it’s very difficult to play this game without a full party of four. While difficult, it’s not impossible to do some of the easier levels solo, or with a group of less than four, however, players will be at a disadvantage. 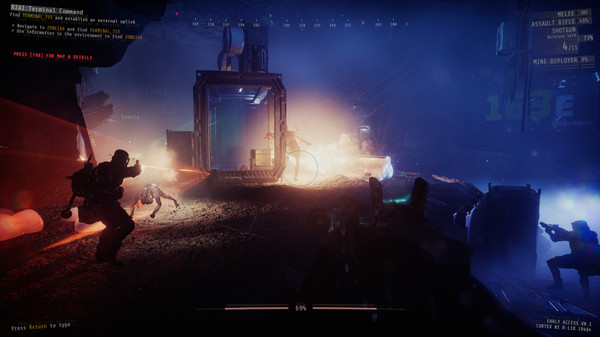 Once you have a lobby of four players, the game begins. Inside the lobby, each person can choose their loadout. There are four weapon slots each, with multiple choices for the players to choose for their build. Each player will have a main hand weapon, an offhand weapon, a tool, and a melee weapon. The main hand and off-hand weapons are up to the player’s individual tastes and don’t have too much of an effect on the early expeditions. The tools are more situational and are often used to create choke points and death traps for waves of monsters that show up occasionally. The melee weapon may end up being a player’s most used weapon in GTFO as monsters are attracted to sound, and a player’s hammer is silent. One negative about the hammer is that while there are four options to choose from, they are simply cosmetic – all hammers are functionally the same.

Once each player’s loadout is completed the party will descend into the complex. When loading into the complex, you can see your party members and interact with them all while the tense and horrifying atmosphere is building around you. Players arrive in the complex and step off the elevator, often into a dimly lit room filled with blankets of fog. Metal groans and lights flicker. Was that shadow behind the fog your party member, or something else? 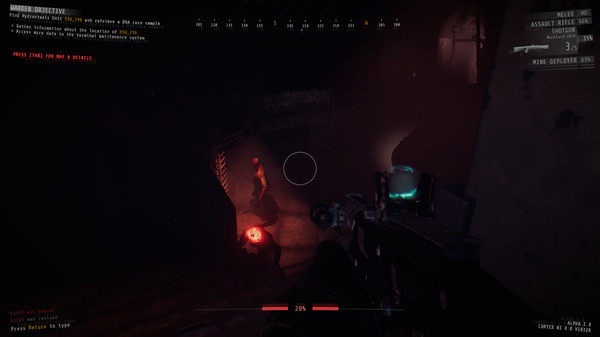 With an objective in mind, you and your party will stealthily explore through the different zones of the complex, looking for the items you were tasked with locating while trying to avoid monsters and find items to heal, replenish ammo, and unlock doors. However, locating any item within the ruins of the complex is difficult. Players must wander around squinting through the thick fog, just to find one box they may have missed with the item the team has to locate. If this were how the game actually played, I wouldn’t recommend the game to anyone, however, items found throughout the game, such as the defogger can help reduce players find and seek frustrations. Additionally, the game introduces a mechanic seldom seen in gaming, console commands. Throughout the complex, players will find consoles that mimic the command line (cmd) program on people’s computers. These consoles have a whole host of commands players can play with to locate specific items. For example, a player can type “list” to see a list of all the items in the level. If the player types “List zone_33” they will get a list of all the items on the floor in zone 33. Finally, a player can ping a specific item using the console to help guide the players on their team to the location of an item.

Overall, GTFO succeeds in creating an excitingly dynamic survival horror game. The inclusion of strategy, stealth, and puzzle objectives provide additional value to the gameplay, and the variation within and between rundowns is incredible. GTFO succeeds in its implementation of numerous diverse gameplay mechanics without falling into the trap of making it overly complicated. Additionally, the game does not force players into a one play style. If a party wants to take it fast and loose, run and gun, or stealth with health, you can do that. Does everyone want to use a turret? That’s fine too. 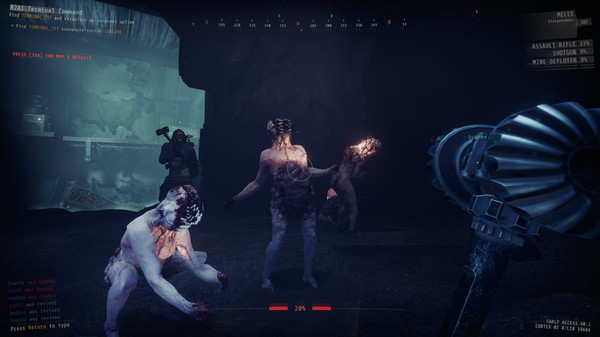 Though still in early access GTFO, has a solid and extremely fun gameplay foundation created. The different elements that are used to create the horror-like atmosphere in GTFO are what elevates the game from a find and seek mission generator to the interesting puzzle horror survival game that it is. Between the groaning metallic noises created by the complex, the shrieking sounds of the sleeping monsters, the fog, and alarmed doors, there is never a moment where the team can safely drop their guard. Though the atmosphere created in the game is amazing there are areas in which the game could improve. Some examples include the melee weapon animation not working, dialogue between in-game characters being hard to hear, and a lack of monster noises when they haven’t noticed a player yet. Additionally, while the sound effects are phenomenal, the limited use of ambient music does constrain the world-building.

In summary, GTFO is a survival horror game that creatively brings together a variety of gaming mechanics in a unique and novel way. While the game can seem overwhelming to new players, after a few games of experimentation, you will know what you have to do to survive. What makes GTFO a stand out game is a rich atmosphere the game has created with its graphics, art style, and sound effects. While the gameplay on its own is fun, it wouldn’t be nearly as exciting without the anxiety-inducing atmosphere present in the complex.