As a game, Aquanox: Deep Descent has a lot to live up to and some pretty big shoes to fill. It’s the fifth game in a series dating back nearly two and a half decades, starting with Archimedean Dynasty for MS-DOS in 1996 (for you British types out there… We didn’t get ours here until April 1997). That one was a sub simulator, but it led to some really great things down the line. The first game to carry the name was Aquanox, from 2001, followed by sequel Revelation in 2003. There was a complete PS2 remake of Revelation, Angel’s Tears, that was dumped by Sony when it somehow failed QA over there.

Seventeen years on from the last release and THQ Nordic has graced us with a whole new adventure, some six years after its announcement at Gamescom 2014. Yes, that’s Square-Enix territory. It got a nice, fat Kickstarter in 2015, and off to the races. 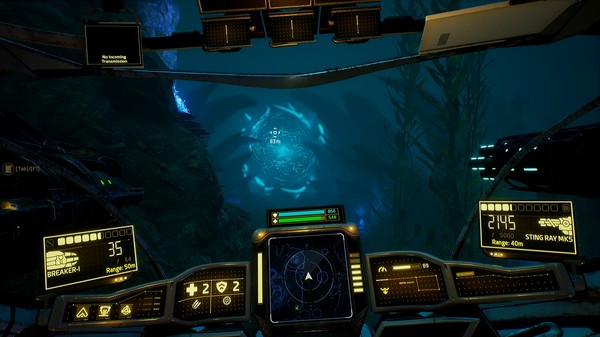 All kidding aside, THQ Nordic did its thing with the help of developer Digital Arrow they’ve served us a nice treat on a tea tray made from their finest silver. Not to say everything is perfect—it’s not. From a story perspective, it’s rather thin. Beginning from the barest of premises, your team of four people must escape a crumbling edifice after having been thawed out in rather a hurry. You remember little, hardly a surprise after who-knows-how-long in cryogenic storage. The guy that not only rescues you but guides you out into what’s left of the Earth after what was presumably a nuclear apocalypse and talks you up like you’re the last hope for the survival of Humanity.

Nah. Turns out there are tons of others like you, and what’s really happened is that you’ve been thrown into the meat grinder with all the other fools they’ve awakened over the last while and a half. The sad part is, the guy died a bad death in your stead. After fighting your way to submarine sub-carrier, you get to run off and do all the other things… Maybe even see if you can figure out what’s up with that project your savior mentioned right after you woke up. It’s even stated clearly that ideally, you should wake up over months to years, rather than the ten minutes the guy had before the local booster gang came down on you like a ton of bricks. 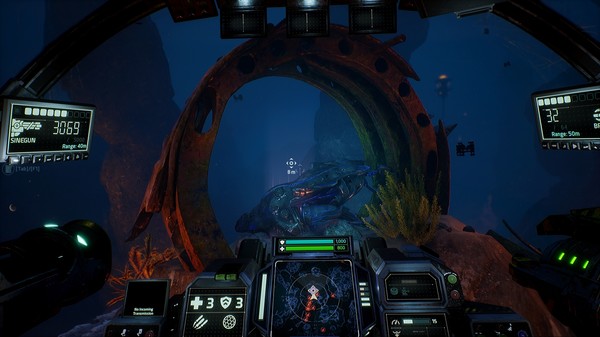 I strongly suggest you avail yourself of not only the tutorial but easy mode until you get the hang of the way the game plays. Some things are going to work, and things you might expect to work, that simply won’t.

Let’s talk environment: Everything is pretty. Even the murky bits. It looks like water, there’s lots of fish, bits of seaweed, and bioluminescent plankton that’ll eat you for lunch. There are lots of caves, rubble, and particulates in the water. It looks like you’re wandering around what’s left of a city or six that’s been blown off whatever piece of land it had been previously sitting on. In one area early on, there’s the massive claw of a cargo crane that you’d expect to see in any major seaport. 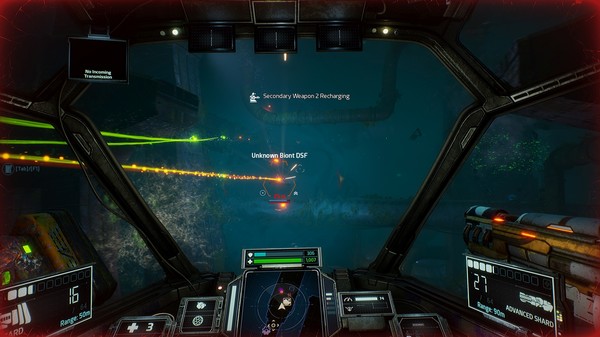 As pretty as this all is, it does have its downsides—in this case, the controls don’t quite match the environment. You accelerate as if through thin mud, at least going forward and back. Turning is painful, but not horrifyingly so—the folks that play space fighter games should be able to make a go of it, as long as they’re paying attention. You can also move vertically and horizontally, which works as if you were in the open air. A tap on the appropriate controls and, you’re caroming off the ceiling, do the detriment of your hull plating and shields.

Moving right along, there is something to be said for the rest of the game: It works. Even with the terrible, terrible things I said about the game above, it’s not a bad game. The shooting feels visceral, the taunts coming in from enemies put me back in the cockpit of innumerable space fighters I’ve piloted over the years. But I digress. There are lots of fun details in there that will bully your video card, so if you’re working with a sub-potato (pun absolutely intended), you might want to turn the quality down. Even on low, it’s not terrible. 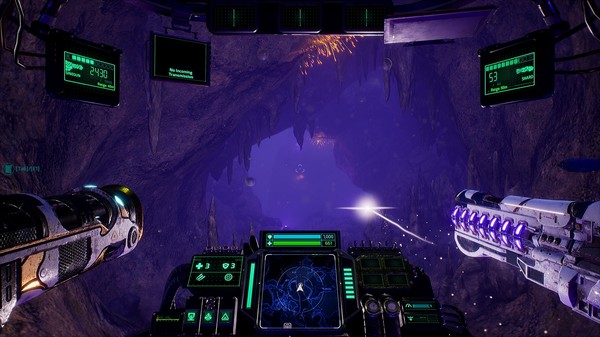 As some of you may have read in the description, there’s a multiplayer mode. In fact, there are two: An arena sort of lobby wherein you can hunt intelligent prey, and a co-op mode in which you can get some help on missions that are kicking your backside. Even with my admittedly poor internet connection, the co-op game I engaged in with two of my friends went pretty well. The only major errors were player-related, not the game, mostly because I was squirreling around with an experiment. Note that turning the nose up will get you killed. No running for the surface. You can try, but you will fail. The Nanoplankton will tear you to pieces. I had three for the game we played, but there’s room for a fourth, and you get to pick the character you wish to represent you. There are two caveats— you don’t get to save your progress in these things unless you’re the host. That one’s mildly annoying but understandable, but the other is— the setup for multiplayer co-op is arcane. It requires several steps and can be derailed before you can set up your own room on the server. If you’re the one that needs help, it might be difficult to get a room for it. Again, I can see why they’d want to do that, but this one seems to be to the player’s (potential) detriment. The no-saving thing prevents people from jumping the storyline (thus failing to “cheat” their way to the ending).

In the end, Aquanox: Deep Descent can stand proud amongst its ancestors. It’s a long way from perfect, but that’s true of pretty much everything. The team that worked on this project put a lot of thought into what they were doing, even if gamifying things didn’t always go as well as it could have, or I might have liked, it’s still a cut above the average, and certainly better than the bulk of the competition. Other games currently dominate the Underwater Exploration/Horror genre, most of you will know of them already. A great many of you will have played them already, and at least one person on my friend’s list is playing one of them as I write. This iteration of Aquanox will find a rich set of adversaries to compete with, and I expect it to do well. At least in this game, there aren’t critters willing and able to steal my knife and run away with it. There’s a reason dummy cords exist in the real world, after all.

Lord Crocosquirrel gives Aquanox: Deep Descent a Drastic Measure of 6.8 out of 10 (68).