What series come to mind when you think of converting one to an RPG. For me, that series is Warhammer, be it either their 40k series or the fantasy end either would be a good RPG. Warhammer did just that with Warhammer Chaosbane, set in their fantasy universe. Eko software did an amazing job of bringing the universe to life.

Warhammer Chaosbane takes place at the time when Nuln, the capital city for humans, had just been reconquered by the humans of the Warhammer universe from the forces of chaos. You play as one of five champions who helped Magnus, the new king of the human alliance to get the city back. I picked Elyria, a wood elf archer who I learned was a lot better at short range then I thought she would be for a ranged unit. When only five days into the rule of the new king the forces of chaos strike back against the humans. A pestilence mage breaks into the castle with a horde of orcs and places the new king under a curse, luckily you were able to stop the mage before they could kill the king. It is now your goal to find a way to lift the curse, starting with the cult of pestilence living in the sewers of Nuln well the High Loremaster keeps the city running. You can’t let anyone find out about the king being under the curse for fear of riots breaking out in the city. This story is the main story of the first six chapters before we delve into the two extended stories, the tomb kings and the forges of Nuln. The stories don’t feel tacked on and feel like adventures your character would go on in the context of the story. 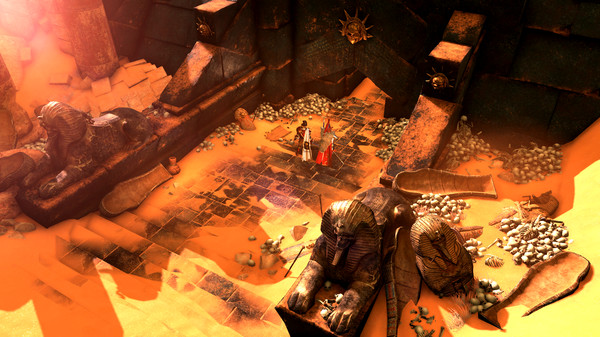 When I first picked up Warhammer Chaosbane I was pretty sure it would play somewhat similar to some of the old D&D games like Icewind Dale. Color me shocked then when I discovered it played much like Diablo, even including the online portion. The loot you collect can be donated to the church for goodies, including the ability to use the item as a visual instead of what you have equipped. You have a lot of options for abilities enabling you to customize your playstyle greatly. I like damaging lots of enemies at once so Elyria’s sword abilities spoke to me along with their ability to keep enemies away from where I stood to shoot. Someone else might like her summoning abilities or her poison abilities. The other characters also have different abilities, like how Keela has her tinkering abilities vs her weapon abilities. The online multiplayer is helpful in later levels, they got harder and harder as I went on until it came to the point where it just wasn’t effective or time-wise a smart idea. A level that would take me an hour to do alone with only an additional person we were able to finish in under twenty minutes. It feels unbalanced at later stages purposefully meant to ensure you need someone else to do maps for you. While this is all well and good for those who have friends with the game or those who are brave enough to play with random people online because yes, they can mess with you in dungeons. For those who do not have a good internet connection, or who do not want to play with random people for multiple reasons this could be a major turn off. It was by chapter three that I succumbed to the drive towards multiplayer.

Graphics-wise, Warhammer Chaosbane looks good. It doesn’t look outdated, but it doesn’t have 4k graphics. Each character has a unique look and with the ability to customize the look of your armor even two people playing the same character would not have the same look. The cutscenes are all styled like old hand-drawn medieval paintings or tapestries. Combined with the style of the game itself, it gives off a cohesive look that brings the game together. I changed the graphics settings a few times and it didn’t get pixelated as some games do at lower settings. One other thing was the inability to reduce it down to smaller window sizes. I could put the game into window mode but, it wouldn’t become an actual window just allow me to tab out of the screen. 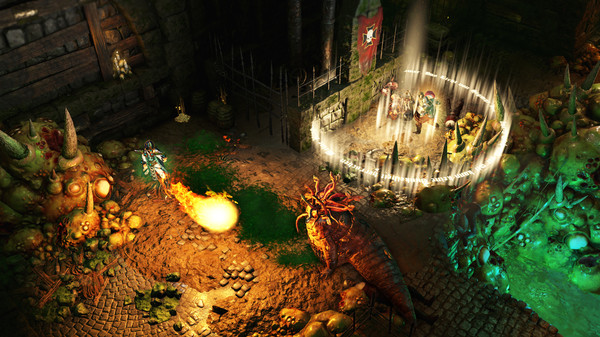 The game sounds amazing, but I did have to turn it down at multiple points. Some abilities were very loud and others were far too quiet. They were easily drowned out by the music or because they were so loud it hurt my ears. Voices were clearly recognizable and also weren’t drowned out, I did feel awfully ridiculous going into the settings multiple times per session to change the sounds again so I could hear the abilities and then turn everything back up to hear the voices.

Warhammer Chaosbane is an excellent RPG with some minor problems that I’m sure not everyone experienced the same as me. The story drew me in even for a person who had heard this all before and kept me coming back to play another session. Warhammer Chaosbane is one of those games I would recommend to the dedicated RPG fan knowing they would like it or at least hoping they would like it just as much as I did.