HYPERGUN is an arena-style rogue-like where you strive to build the best gun from random parts to beat a simulation, in doing so, you prove you have created the best gun to use against aliens that are on earth. In HYPERGUN, you slowly unlock more random parts to find and unlock new classes via other co-workers to go about the simulation. Built on the unity game engine and with synthwave, bright neons, and fast-paced shooting, you will traverse through level after level to build your gun to conquer each run. HYPERGUN feels like it takes a lot from the classic doom titles in terms of just running, jumping, and shooting. It brings a simple but enjoyable game from what HYPERGUN provides. 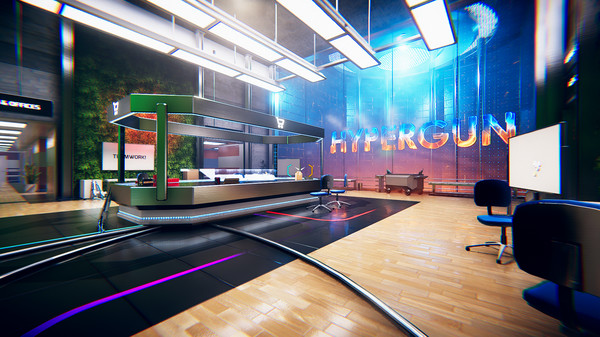 You start in HYPERGUN in the DevTech Labs as the intern class. Most of the actual story is posted around in the more or less useless parts of the office but you are out trying to create a gun meant to use against the aliens on earth. Your job is to complete all the simulation levels with your gun to prove its the best for the job. As you fail you are returned to the lab where you can spend coins to unlock another co-worker to play or more mods that can appear in the simulation. Each class/co-worker of the four has different weapons, and most skills revolve around these weapons. Each weapon has perks or stats over others as the SMG you start with has a higher fire rate but low damage or the shotgun that has multi-shot but has low accuracy and fire rate. Putting a spin on the classes is the ability of each one to reflect their role within the company. The intern can throw hot coffee, the lawyer can deny others, the security guard can brace his damage to give some examples. The only error I found with the classes is some of them fall short compared to other classes. The lawyer with the shotgun is a big one as some of his abilities involve standing still in a small area when he uses them, and the game demands to move and rarely stopping. Topping it off is the shotgun is lackluster in terms of DPS compared to others in the hoards you will be fighting, and the mods don’t really change as nice to his weapon compared to the others. 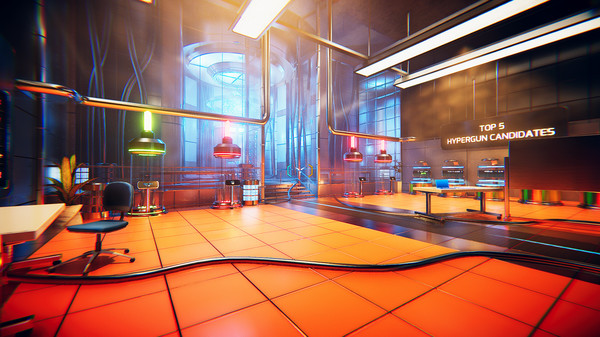 The hoards of enemies are simple, attack in a couple of ways, and work nicely together. The balance of the enemies makes HYPERGUN shine as each level adds more but still has the lesser to field the area. As you progress, you see more synergy with the enemies. This can be as simple as ranged ones supporting the melee ones to drones that shield tougher targets until you destroy the drone. As the levels progress, the tilesets also change up more and slightly become more complex. Not just be the traps or ramps but the cover and objects for enemies to hide around as well. Even if there is a mini-map showing you the enemies around you can still easily be surrounded if you’re not watching closely to your surroundings. Levels may seem short and fast-paced, but once you clear a room you can judge where to go or warp around to past rooms as your only locked in once you start a new room. Bits you collect are used in stores on each level, and map rooms, treasures, keys for chests can be scattered about. Each level ends in a boss that really favors in varied ways of fighting to the point you can lose just be your gun is lacking in a major stat. Clearing stages is your best way to acquire the coins needed to buy new abilities, modules to spawn on runs, or the new classes, but the prices seem too high for them. You get one coin randomly as a random enemy drop but always five from the boss of each stage. Unlocking a class takes a whooping fifty to unlock, and you need at least ten to fifteen for each skill unlock, and unlocking mods takes around five or ten coins each! I felt it was the same grind to just unlock the classes to try them and took too long for too little most of the time. 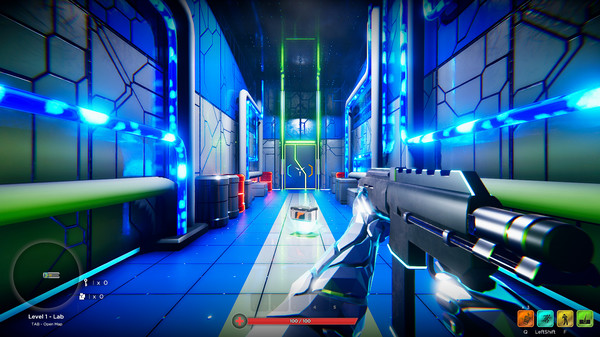 HYPERGUN is a good game, but it has some major things preventing it from being a good game, I feel some changes would make it something amazing to recommend to others. Even just halving the cost of things with the coins would do it. Even then, I feel there isn’t much to inspire or reward increasing play. You would think after even seven hours of play I could have started with more mods, extra bits, or just anything, but there isn’t anything like that in HYPERGUN. Level Layouts and the fast-paced combat with the enemies are nice, and the music fits great with the visuals. That mixed with few bugs and running smoothly is a big plus in my book. I would recommend those wanting a more classic Doom rogue-like shooter or to those that enjoy an arcade shooter to take a look at HYPERGUN and I did enjoy playing it, but I feel it’s few flaws are major ones despite it running smoothly with little bugs.