Marvel’s Avengers is an Action-Adventure game with RPG elements designed and developed by Crystal Dynamics and published by Square Enix. Several years ago the world heard of the Marvel licensing acquired by Square Enix and not long after that the news of “The Avengers Project”. A few years later, we have Marvel’s Avengers announced to the world. Not just a NEW Marvel game but an RPG that could potentially be coop AND developed by some of the best in the industry who have developed the likes of Tomb Raider! We are told 4 player coop, and it will be a looter. This was very exciting to me because as a gamer I love looters and ARPGs. The only settings I like more than cyberpunk are superhero settings.

Marvel has had such a huge impact on my life I was filled with “Hype”. The first trailers are shown off, and the crowd goes MILD. The reason for that I couldn’t say. I thought it was because they weren’t using the voice actors from the cinematic universe, their story, or their looks. I mean I watched the trailer and thought the gameplay looked good, but I even heard others saying it looked generic. So now the world has its mindset on what Marvel Avengers would be long before it releases. Then the Marvel Avengers war table streams start, and more and more details come out about the game. First, the campaign is a single player. Multiplayer is a separate mode. The game will have all “free future content”, but they will have microtransactions. Then the beta begins, and then there are battle passes added. Talks of they will be single purchases per character. Which turned out to be true. Then all these cross-promotions announced for skin packs and even characters exclusive to platforms. That being currently, Spider-man will be exclusive to PS4/5. Not to mention the very rough betas for the game with awful screen shake, motion blur, and consistently terrible performance. Some of these issues were slightly addressed before the betas ended, but not all of them. 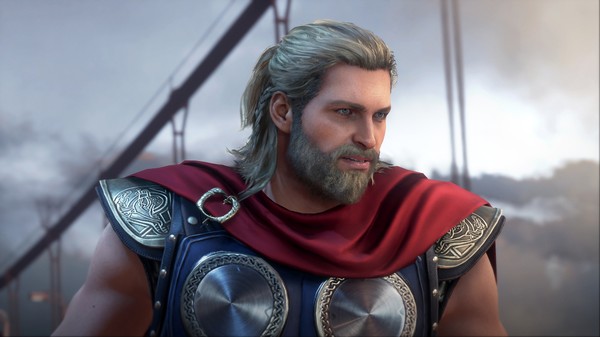 So now the game is released. We have what looks to be an action RPG set in the Marvel Comics universe based around the Avengers. The main character, the one who pulls it all together, is Kamala Kahn, aka. Ms. Marvel. The story starts with her as a young girl who has won a fan fiction writing contest and gets invited to a celebration on the Helicarrier. The best experience and moments of Marvels Avengers took place in this mission. The story felt emotional. The immersion was great. It was almost as if I were the one at this event. Strolling through the area listening to all the conversations and looking at all the environment. It was breathtaking. After this level is where the game really kicks in. A day begins, and you go through the tutorial of playing each character in the bridge scenario. The mission was very cinematic, but it doesn’t do the characters justice in terms of gameplay. I had asked a friend to stream the game for me on Discord as I wanted his opinions. He couldn’t beat Taskmaster in the tutorial. So he uninstalled and refunded his copy of the game. Was that a sight of things to come?

As you play through the game, you play as different characters as you find them within the story and thus eventually unlocking them for play. The game has some great levels, but the problem with them is that there are very few. You end up playing the same layout with the same enemies over and over again. Even in the campaign. Anytime it involves an AIM LAB, I let out an “AGAIN?!”… Don’t get me wrong there are some really interesting levels in the game. Most of them are the ones where you are doing some platforming. Which is Crystal Dynamics bread & butter, and that shows. There is almost a formula to the levels and unlocking new characters. Go on a mission to find a character. Once you find the character you then play the mission as that character. Then you play a mission again with the new character, and now you have them unlocked. There are several mission types outside of the campaign such as Harm Rooms which is basically a wave-based survival mode. There are several others, but the hero missions and the Villain lairs are by far the stand out portions of the multiplayer levels. Ultimately there is just way too much repetition, and it all starts to look the same. 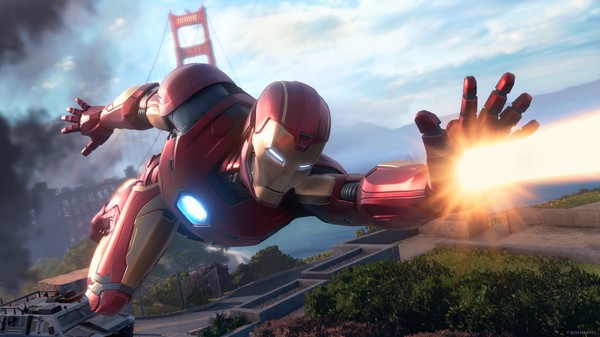 The story of the campaign is fairly decent, but it seems like they strayed too far away from what makes comics great. It just doesn’t have the quirkiness of a Marvel comics. Even in some of the darkest issues or series, there is more humor than what is in Marvel’s Avengers. I want to point out that the story of Marvel Avengers seems to be following a storyline similar to the TV series and newer comic series Agents of Shield. So don’t be shocked if you end up with characters like Quake making an appearance. That said, there isn’t any replay value in the campaign. It’s a one and done kind of story. They do claim as new characters, release they will come with their own storyline. So I guess we wait and see.

The voice acting is incredible They have some of the best voice acting in the business. They do a great job pulling in the emotions. My only gripe about the voice acting is Nolan North’s portrayal as Iron Man. IT SOUNDS WAY TO MUCH LIKE HIS DEADPOOL! There I said it! Having played the Deadpool game and watched/listened to many other things of Deadpool where Nolan North voiced good ole Merc with a Mouth Wade Wilson has me so confused when he talks as Iron Man. I kept waiting for Deadpool to make an appearance. That isn’t to say he did a bad job, just hit it a little too close to DP. The rest of the audio is alright. Not much can be said for a soundtrack though. 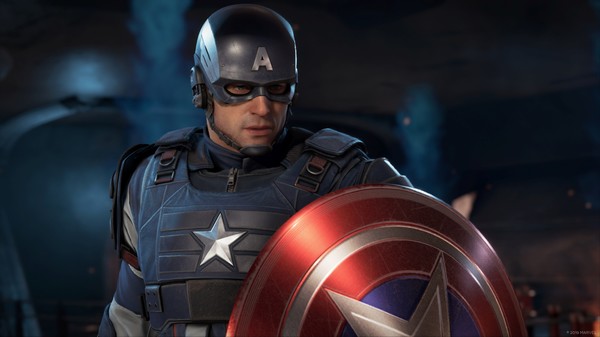 Earlier I called the game an Action-Adventure game with RPG elements. Why some of you may be asking? Is it an RPG? Well, it is labeled as one. It seems like it could be one… but… no. The looting mechanics, the gear of the game feels as if it were an afterthought. For that matter, so does co-op really. None of the gear you pick up changes the way your characters look. They are purely stat based. Not even stuff with cool effects. It is there to have you put time into the game. It is what I often talk about… and hate… the illusion of content. While I love a good looter, the loot needs to be meaningful. None of the loot I found in Avengers felt that way. There are is also little to no choice in the campaign, thus offering no replay value whatsoever. Each character has talent trees, but you can unlock everything. You can make some changes in the tree to adjust how a certain skill behaves, but even then, it feels very minimal. They liked to use play how you want to play each hero almost like a marketing statement, but really that felt like an illusion as well.

Gameplay and graphics. These are the two most standout portions of the game. Yea we would have loved to have gotten this new title with RTX support. It looks great, but it would look incredible with ray tracing, and with the performance issues I feel as though DLSS 2.0 would be a saving grace for Marvels Avengers. Still, the game looks great, and the visuals do a great job immersing the player into the role of an Avenger. The gameplay also plays into that immersion. While you may not have a true variety in how each character plays, each character feels vastly different from one another and encompasses the Marvel character. There are some crazy combos you can pull off, and it looks great doing them. One of the very first things I noticed about combat was related to the ranged attacks. Depending on where you hit a target, depends on how your target gives feedback. Thus hitting them in the head with Caps shield stumbles them and does extra damage… Hitting them in the leg can knock their legs out from underneath them. That is a whole new level of combat. Not counting the various combos and abilities at your disposal. That is before you get into the teamwork portion. The traversal mechanics for some characters were great, and for others, it felt lacking. The gameplay was still fairly solid. 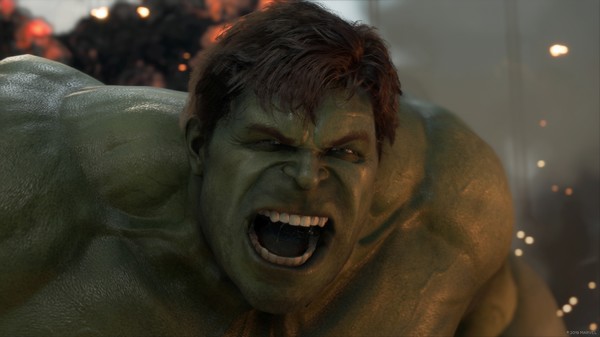 Marvel Avengers looks great, but not good enough to use the system resources that it uses. My rig has an I9 9900k, 32gb GDDR4 3200MHz Corsair RAM, and a Gigabyte NVidia GeForce RTX 2080 Super. The game was installed on a Samsung Evo m.2 NVME drive. My average framerate on max settings playing in 1440 was 43. That is whack… another person I know who tested settings in the game for me was using a 2080 TI and an I9 10900KF and was getting 58 frames on max settings on 1440. It just seems to me that the PC version was a port and didn’t get a lot of attention. Especially, when it comes to performance.

There were also many occasions where the game crashed, or I had to restart a level because of a bug. One very common one for me and people I played co-op with was where we could get to the end of a mission, and a wave of enemies was meant to spawn. However, when they spawned, they spawned in the walls or never spawned at all. We would have to exit the mission entirely and thus lose the mission progression.

I like to let a game hold itself up on its own. However, if you pay 60$ for an RPG don’t you want some real replay value? I mean I am someone who plays tons of looters, and sure you always get repetition, but Marvel’s Avengers hit a whole new level. It just didn’t feel like an RPG. There was crafting, but it felt once again like another afterthought. There were faction rep systems, but they felt like they were simply there to time-gate you. All the parts of the game I was most excited about felt like afterthoughts. If the loot changed the way you look that would be cool, but nahhhh. They want you to buy costumes. There are some costumes you can get without paying for any microtransactions, but most of the good ones are all locked behind paywalls. A legendary skin in the store is 1400 points which costs 14$. By buying the game, you get access to the first six characters starting battle pass (challenge card). Oh, and by the way. Yes in the future, if you want to buy a Challenge card, they are character-specific and 10$ each. I would say wait for a 50% off sale. Hell, this one might even end up free to play.