Kingdoms of Amalur: Re-Reckoning is a remastered Fantasy Action-RPG from the 2012 game Kingdoms of Amalur: Reckoning. The unique world made in the game takes place in a realm used or inspired by many fantasy games or tables which is the Fae. Anyone that has been a big fan of fantasy or placed many table-top games knows how the Fae is a magical realm of wild nature that is as deadly as it is beautiful. Kingdoms of Amalur takes a unique story while introducing their own elements while bringing key parts of the Fae realm that are common in most books and media. While being heavily story and narrative-driven, the game offers a wide range on how to build and play your character through the main story with an abundance of side quest stories that have just as much detail as the main story. Difficulty can be ranged to be casual where anyone can do anything to go through the game with ease to a very hard where you have to really try and care for every detail to overcome this challenge. It can be changed at any point to adjust as you play. 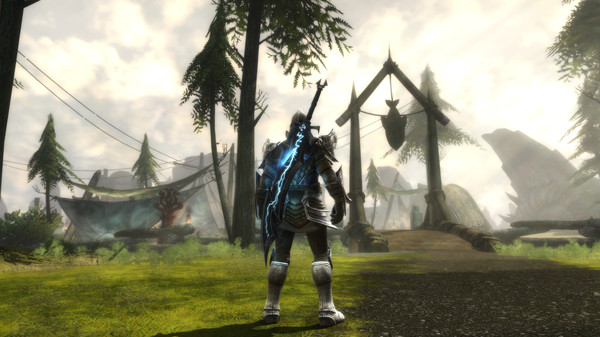 You create your own character in this world that was believed to be deceased from a set of races that have traveled to the Fae to settle to either be free or start a new life. Among waking from the dead bodies around you, the main story begins. At this point, you are not tied down to any set “class” or role as the game teaches you the basic weapons and controls. Everything is based around the three major talent trees of might, finesse, and sorcery. While being broken down to the basics of a warrior, rogue, and mage. The points you get by each level can go to any of these talent trees as weapons and armor requirements are based on how many points you put into each one. With each level up you also gain skills points that go into more supporting role features that range from crafting abilities, stealth, tracking, or making unlocking objects easier through lockpicking or other means. No matter what you do or combination you pick, you always have access to dodge rolling, blocking, two weapons to swap at will, and a shield that can quickly, be drawn out to block. 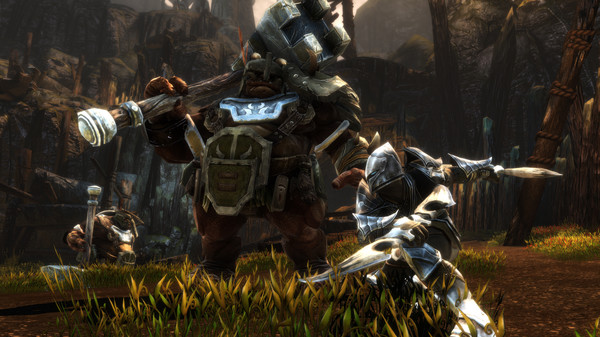 Combat is straightforward but simple but with the ability to gain more abilities as you unlock them through your talents. Magic doesn’t feel out of place at close range or its ranged combat as staff combat feels like a shotgun, as you use your staff and cast spells during combat. It was a welcomed change to not feel like a mage that can not take a hit and not have to “kite” the enemy. I loved the flow of combat as one, and even with might (the warrior talents), you get the feeling of overpowering the enemy. The wild card is the finesse as many options feel like it’s best for hit and run or great to mix with the other talent trees. Each base of the trees mostly revolves around getting the most out of the basic weapons in the game. Kingdoms of Amalur even offers an in-game reset of your skills and talents for a fee of gold if you feel your current path isn’t working for you. Combat feels fluid, and you can just spam unless you want to be hit yourself. More of the advanced weapons like scepters, fae-blades, and the chakrams, add weapons not normally seen in games and were welcomed to use and also favored in a secondary weapon very well. The biggest drawback to combat is the enemies tend to be a bit similar in terms of A.I. or get a feeling of having to attack the enemies in the same manner. Like having to treat the large enemies the same and the ranged attackers not doing much different. Once you fight that one type, you feel you have seen all it has to offer. The fate meter mechanic will be given to you get at the end of the tutorial part and acts like hyper mode when activated. Where you can destroy the current enemies with ease while gaining a bonus. Though a neat thing that fits with the story, the finishers you do for the experience bonuses feel out of place or could be done differently by the random weapons that are used during them. 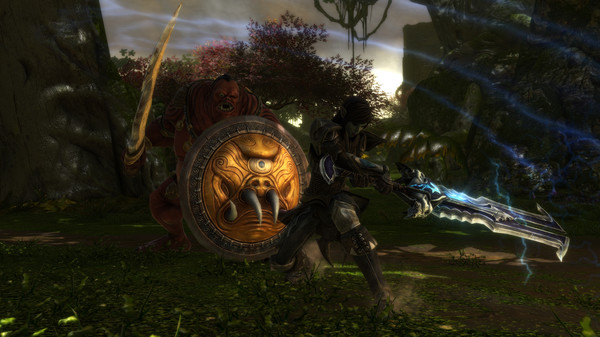 The world has settlements, but you always feel this is an untamed, dangerous wilderness. The game doesn’t feel 100% open world as you go from sections at a time with roads or paths connecting them. This doesn’t mean there are no secrets or more to find as there are collectibles and ingredients scattered with enemies suited to the areas. The lack of loading screens unless you go into a building or cave helps give a feeling of the large world. Most locations are used in a quest that can lead to deadends in some locations unless you get a quest to go to it. This can be annoying as exploring can feel punishing unless you gather all the quests in the nearby town. Quests are everywhere, and most quests also lead to other quests. Amalur helps the player by showing a faction symbol of the character you are talking to as you pick dialog options. Scaling feels fair in the different sections as areas are easy to get an idea via the map where is what. The design and the detail of this game is amazing and seems to show out more through the graphic upgrade. The music suits the environments of the realm. The lighting feels a bit too on the moody side but fits the world. The amount of voice acting, story, and lore is what drives this game more than anything. Amalur delivers more than most games on this end. With so much detail there are annoyances that do not seem to fit well. Though it may seem like a peeve, none of the villagers seem to use their beds and sleep next to them on the floor, and the environment use seems lacking as tents and other objects just seem as decorations for show. Bugs are visual, and gameplay can be annoying but, nothing game-breaking. This can lead to odd highlighting on the outline of some objects or objective markers not correctly going away on collection. 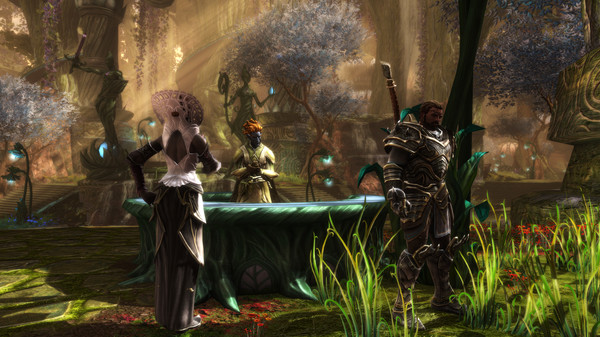 Overall Kingdoms of Amalur: Re-Reckoning is more than just a remaster with an upgrade as a new DLC expansion coming in 2021. Anyone that was a fan of the original or looking into a new fantasy action-RPG will want to give this one a try or look into. The heavy story, lore, and style is something different and worthwhile even with the flaws I mentioned. If you don’t want something heavily story-driven or quest-related then this would not be a game for you. Gameplay-wise the game is very fair with quality of life options that you don’t feel you have to reset from the beginning if you wanted to do something different. Many of the spells or styles that are in were a welcomed change to many different RPGs as you adventure as a lone wrecking crew.

FoxieEXE gives Kingdoms of Amalur: Re-Reckoning a Drastik Measure of 7.9 out of 10 (79)