Spellbreak is a free-to-play cross-platform battle royale game where everyone is a mage. Nintendo Switch, Playstation 4, Xbox One, and Windows via Epic Store are involved in the crossplay of this chaotic twist to normal battle royales. The game itself is centered around using magic which is a nice change to the ones where you go around finding guns and mostly using guns. This is one of the few battle royales I took interest in as it actually looked like doing something different with a popular concept.

Before a match in Spellbreak, you start by selecting your class or primary gauntlet. The gauntlets are tiered to one of the six elements in the game. Ice, wind, lightning, fire, toxin, and earth. Your primary one gives you extra bonuses as you enter the safe area circles along with starting bonuses gained from starting with that element. You can pick from multiple different areas to start dropping in at that change from match to match, so it is easy for players to divide within the map without too many issues of everyone being in the same starting area. Matches can be done as solo’s, duo’s, and squads of three, and at the time of this review, there is just one map. This could have been a big issue, but the map is very diverse and with loot boxes scattered but in the same places each time. They can contain several items to upgrade too, but it is mostly kept simple as the five main items to collect. The primary gauntlet upgrades if you find one of the same types of a higher rarity. The rarer the item, the more powerful it is. The secondary gauntlet can be any one of any other of the five other ones then your primary. Both can be used in sync and, the skill and primary attack of each gauntlet react in some way to the other elements in lethality or defense. Poison gas can be ignited by fire or just be frozen be ice for cover. Times more than once can cause crazy results of added damage as you can use the wind’s tornado, fire, and poison to trigger a chain reaction of chaotic fun. Many times these can be done on purpose or accident as spells fly about. Levitation and movement make this game feel very fast-paced, and with it tied to the same mana bar as your spells can make mana management vital. You are not going to be on the ground or standing still for long. Mana does come back fast when not being used. Other collectible item upgrades increase your armor, total mana, and movement speed. Scrolls can also be collected that level your selected talents that can change up your playstyle. These talents change other aspects of your character and are unlocked by leveling up your different class’s gauntlets from playing matches. I never felt I was left out, as the starting talents are not bad to use. The last item can be a big game-changer as they are the runes. Runes are a large cooldown ability that mostly does large support roles. The rarer the rune the better it is and lesser of a cooldown. These range from seeing enemies through walls for a short time to find other players, gaining large fly boosts or jumps, or even invisibility and teleportation. Everything mixed together brings something crazy that favors movement and planning to brute force. Consumables for your health and armor can be found and even managing them helps you as the area gets smaller with no time to use these that work overtime then instantly.

While being a nice fast-paced battle royal with magic without the use of guns, it does have some drawbacks that can feel frustrating. The game itself runs smoothly and amazing on PC, but the mouse and keyboard still have an edge on aiming compared to the controller. The mapping of the buttons on the controller is fluid, but I feel the edge is still to the mouse and keyboard. Spellbreak has next to no customization as outfits you get in the shop are full characters. Items I have collected to have on my back or in my profile don’t feel rewarding or interesting. At the time, there isn’t much of a story or any reason to the battle royale. Long as you go into Spellbreak wanting a magic-based battle royale then you will be golden. The classes themselves can feel more balanced compared to other ones as some feel more suited to early game while others feel they are better later in the match. A couple of them I felt are more useless compared to others for a second choice with any gauntlet. Not to say they are 100% useless, but I would bypass the highest rarity or some just for a mid-grade of another.

After playing a few matches or a day of playing you may get a sense that you experienced everything in the game so far. I myself love the gameplay and will continue to play it here and there, but I can’t say anything that entices me to strive for rewards or leveling. It is nice to not care for the place you finish in as damage and kills matters more, but besides enjoying the gameplay, it just feels like a dinner with no sides or a drink. I would still recommend this to anyone that normally isn’t a fan of battle royales and want something magic based as I hated the slow pace or large gaps of time of nothingness in other battle royales. The magic and movement base of the game really make this game feel nice, different, and enjoyable. Being free to play, it doesn’t hurt to try it out either. 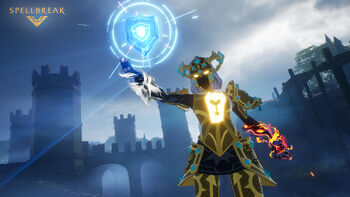