The trend of card-based rogue-like games continues as a new team tackles the genre. This time though, there are more than a few twists to the traditional formula. Deck of Ashes is a card crawler like no other. The real question here is whether it can stand among the elites of the genre.

Deck of Ashes separates itself from other games in the genre by giving a fully voice-acted story to each character. On top of this, you choose your path through the various randomly generated maps. Not just forced to press forward. Noticed a shiny chest two steps back? You can go back and get it. Be careful though, as you will most likely encounter new events or battles on those spaces you’ve already cleared out. 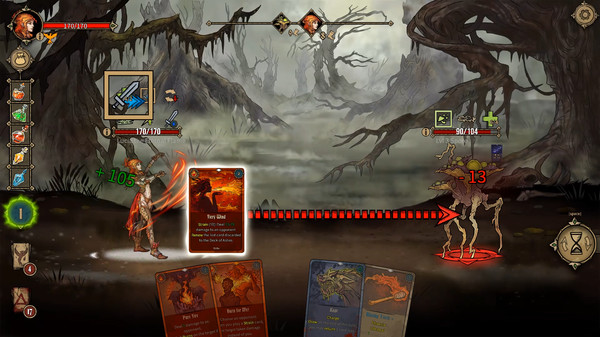 The focus of the game is tuned more toward resource management than the actual card combat, but everything returns to that combat system. This would be a bit of an issue if the combat weren’t interesting enough to stand on its own. The combat system is a bit different from other games in the genre though.

When you play a card, it is permanently discarded until you regenerate it. This can leave your battle deck pretty thin after a while, though there are a few ways to regenerate cards. The first is a special card that is always added to the bottom of your battle deck, the ash pact. This lets you trade a bit of HP for the ability to regenerate a number of cards at random from your discard pile. The second method of reclaiming your deck is to spend a currency you receive from winning battles. 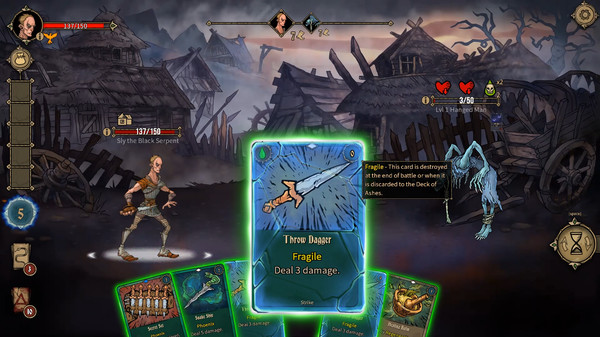 This currency is known as rest points. After each battle, you have the option to spend these points to recharge your deck or heal your hp. With the rest point mechanic, you may find fewer ways of blocking incoming damage or healing during the middle of the battle.

The story focuses on a band of outcasts who made a giant mistake, releasing a curse upon the world trying to fix their mistake for their own individual reasons. Some want the power, and others just want to right the wrong they have done. There are four playable characters, each with their decks and strategies. 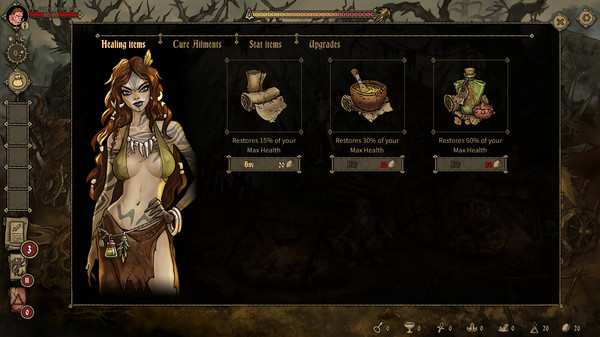 The most unique part of this experience is that there is a draft mode, allowing you to draft a starting deck, or you can start with a default selection of cards. The devs have even made an easier difficulty setting that lets you retry battles and causes the ash pact to use less hp when regenerating your deck.

In all honesty, though, I did not enjoy this game nearly as much as I thought I would. It has merit and is a solid experience, but the reliance on out of battle resource management instead of tense draw situations turned me away. Most of the characters live by the motto a good defense is a good offense, so there are not as many defend or shield style cards, instead of making you rely on the few healing cards or rest points to keep your health up. On top of this, you need to weigh out whether it’s worth it to regenerate a card, or even if you should take a card, to begin with. This is not the kind of game where a thin deck is beneficial though, as you will be burning hp more often to keep cards in your draw pile. 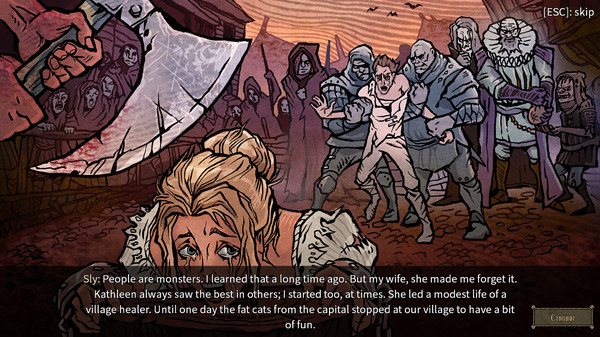 There is also an in-depth tutorial chapter that walks you through the gameplay step by step. There are two basic phases, the exploration phase, and the combat phase. In the exploration phase, you move between various nodes on a procedurally generated map, gathering resources, and triggering events or battles. The battle phase is where all the cards you have in your deck come into play. Each node has a set amount of resources you can extract but once done the node becomes depleted. It can still repopulate with events or battles, but will never contain more resources. This enforces proper path planning to ensure the fewest revisits to depleted nodes.

These resources are used to upgrade your camp or buy new cards and abilities. Each of the four characters has access to similar abilities, but their unique cards make them play wildly different. You will need to adapt to the randomness of the generated world in order to best tackle the more challenging fights. 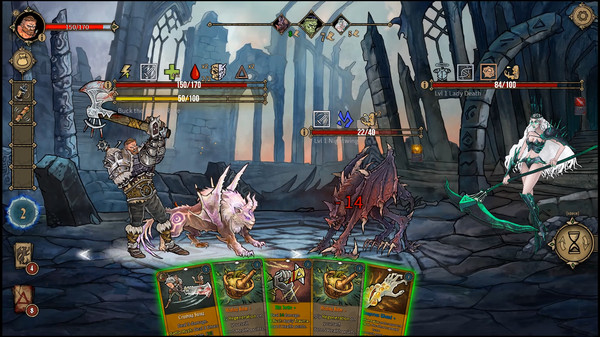 The game performs flawlessly, and I did not encounter any bugs or hitches during my time with the game, though with a simple card-based battle system, none were expected. The options menu is sufficient, offering the ability to set volumes and resolutions as expected. There are also some minor graphics options to keep animations running smoothly even on low-end machines.

Any lover of card-based roguelikes should give this one a shot, though the experience may be vastly different from what you may be used to. The game is definitely solid and worth a look.