Desperados III is a realtime strategy game based in the wild west. The last game was back in 2007 which had similar single-player gameplay and was story-driven. Desperados III follows the story of John Cooper as he hunts down a man named Frank for the murder of his father. The wild west setting is a great change of pace as too few games take place in a time where you feel everyone here is on their own or what is around them. Spots of civilization mixed with the tough environments of the wilderness. Desperados III brings a nice mix of locations with a story you would expect in the wild west.

The start of Desperados is a quick tutorial with John Cooper as a kid with his father before the actual game starts. The tutorial is a nice introduction to anyone not used to a real-time strategy that involves controlling a small party than others that involve building a base and army. Anyone that has played any Pathfinder or D&D Real-time Strategy game will fill right at home when it comes to controls. Unlike those games, you do not level up or upgrade that gives you a more believable game while sticking to the action and gameplay. This can leave to staleness in parts of the game since different enemies have to be taken out in the same way stage after stage. This is somewhat prevented by the focus on stealth but when it comes to where you eliminate enemies you will find a repetitiveness. Challenges are offered for replayability but with very dynamic main party characters and enemies with a field of minion enemies don’t seem to balance well. Extra challenges being optional named bounty targets to add an interesting mix as some can even be civilians or enemies harder to deal with while avoiding the alarms. The predictability of enemies can help with lots of tools and guides to help as you stealth but I did feel I was doing the same thing over and over for most of the missions then adapting to them. Alarms when sounded are more local and release a set number of reserved guards in nearby buildings but can still feel like a risk when you do go loud. Most of the abilities of characters are either lures or crowd control for stealth then to help with open combat. Most of the game revolves around stealth as you are generally outnumbered or outgunned. Each of the characters in the party has a type of gun and moves to better suit different enemies or situations. Ammo is scarce and the cooldown on shooting each time gives risk but rewards for using your loud guns correctly. 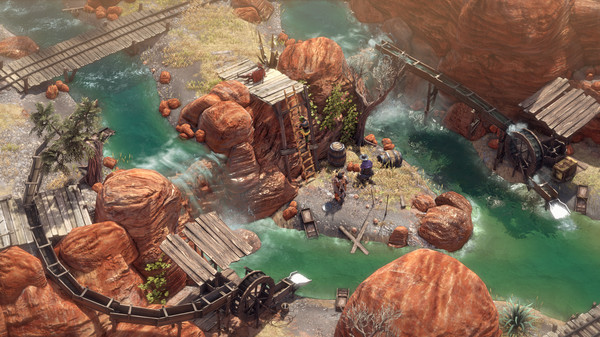 The characters are highly dynamic and taking care of through the good voice acting, voice lines during the mission, different movement speeds, and their varied abilities to carry objects like dead bodies. Cooper can climb but Mccoy being older cant. You feel like each of the characters are highly unique to the point you have to use them all to complete a stage. Some stages you don’t use all the characters you have been playing to add a mix of not relying on one too heavily or mixing up the mission. Stages themselves open up nicely with a sense of freedom as objects can be in different spots or different orders with you pick how, where, and when. In some cases, it is a pick your own path or location for the same objective. The designs of the locations are nice and carefully planned out but it gave a feel of a place divided into small sections then a large stage. Desperados III did a good job balancing it all even more so with ways to make things look like “accidents” to the point that guards don’t sound the alarm from seeing a dead body in this way. The stages felt realistic and believable when doing the missions then objects places just for the game mechanics. You can pause the game to allow to execute multiple orders at once then execute the orders when unpause or paused to set up some tactics requiring some time. Another nice addition is you can fast forward time to speed up a patrol or long movement of a character to not make it feel like your waiting. I also enjoy that you can use this just for moving and not just actions to prevent misclicks at the worst times. Silhouettes of the movement path during it also help the player line up cover and bushes to hide in as you plan. There is no cooldown for doing so either so you can just plan as needed.

The characters drive the story as you follow a story of Cooper’s hunt for a man named Frank as you run into a mercenary named McCoy, a huntsman friend named Hector, and more. Voice lines though the missions and interactions do not make it feel like a static game even if enemies do set patrols. Controls and options to see the cones of sight of the enemies make it feel fluid. I never had an issue with the controls or the default buttons to them. If anything rotating the camera to select the exact spot you want to move to can feel odd at times. Most of the time I didn’t have to rotate the camera at all to do most of the mission but would recommend it just to see everything better. The constant quick save and loading as very fast and was impressed by it not feeling like a long wait on quick loading. I ran into no bugs, crashing and everything seemed to work exactly to the purpose. Running on the Unity engine, I feel this helped with its loading and smoothness of the game. The graphics themselves are fitting along with the music with nothing bad or good to say of them. The look of the game fits nice even more so with the lack of a “fog of war” so you can see the entire map. The size of the map is big but believable in the eyesight of the characters. 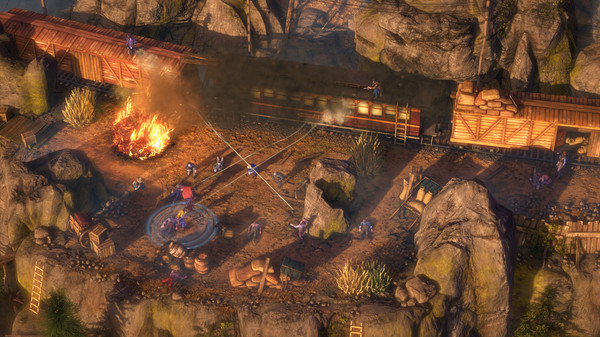 Overall this game was better then I expected to be and would recommend it to anyone that enjoys the wild west or likes the idea of a stealth real-time strategy. I enjoyed the idea of playing a game without worrying about RPG mechanics and having a good quick save/load system. I found the story nice and everything working together with a purpose. Even down to the abilities, even though there were not many they all had a purpose and never felt one to be left out. Some repetitiveness came from it but, overall I enjoyed attacking each on as if it was a puzzle. The style of missions or objectives is something I would hope other games put in. I never did enjoy how many games just send you to collect X or kill Y a lot compared to taking out exact people, locations, etc. I felt no uselessness to my objectives in the story. I loved the idea of how its better if you stealth but, you can sneak in moments of loudness to mix it up to clean up or if things line up just right.