Sports games are a dime a dozen and see new releases every year. The most common ones showcase the likes of the NFL, NBA, and even WWE. One sport that is rising up to cash in on this trend is the high octane mud-filled sport of Supercross motorcycle racing. One of the most recognized championships in the world of Supercross happens to be sponsored by Monster Energy, a company most known for its line of energy drinks. They teamed up with the fine people over at Milestone S.R.L. once again to produce the third official game for the Monster Energy Supercross circuit. Let’s see if this entry blows the competition away, or if it hangs at the starting line spinning its tires.

Before we get too far into it though, I should note that this is my very first experience with the work of Milestone, as well as my first experience with the Supercross style of racing games. To that end, much of what I say here is solely based on the technical aspects of the game such as sound, visuals, and overall gameplay. I am aware there are massive super fans of the Supercross racing subgenre who will wage war over inaccurate physics or a lack of their favorite brands being represented, so I can only hope this fresh perspective on this particular game leaves you confident in any purchase decision you plan to make. 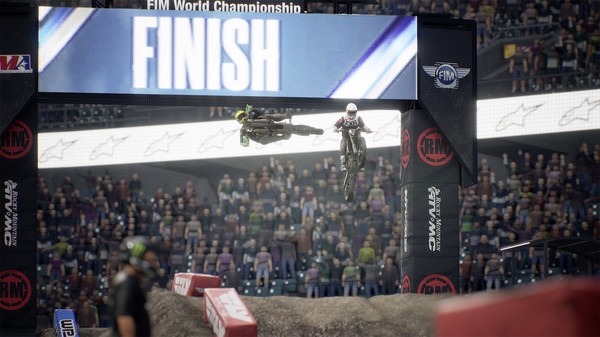 Now with the formalities out of the way, let’s get straight into the action. When you first boot the game, you’re greeted by an expansive character editor. Almost every aspect of your rider is fully customizable. There are even several gear choices from popular brands to deck yourself out in so you can look good while flying around these well-crafted tracks. For the first time in series history, you can now create a female rider, which is an awesome addition. This is merely cosmetic in nature and does not affect anything as far as gameplay goes. From what I have gathered from other players, many of the gear choices have been used in several prior Supercross titles, with only a handful of new additions. Some of the older gear definitely looks dated by comparison, but it’s not a massive dealbreaker.

While you’re working on building the perfect image of a champion, you’ll notice a small selection of somewhere between three to five licensed music tracks. These songs only play in the menus and some pre-race screens. They fit the energy of a day at the Supercross stadium well enough, and the lack of variety isn’t that important as you’ll be spending most of your time on the track anyway. The sounds while on the track are a different story entirely. You’ll hear the revving and purring of your engine of choice as you glide around the track and overall the jumps. The engines here sound exactly as you would expect them to. This may seem like a weird thing to note, but to someone who pays a lot more attention to audio, I can tell you that it’s a bit off-putting to hear unrealistic engine sounds in a racing sim of any kind, thankfully this one has it as close to perfect as one can possibly get in 2020. Other track sounds are also nicely spaced in full stereo or surround if you have the setup for it. This means you’ll hear the position of the crowd cheering change as you fly around each corner. 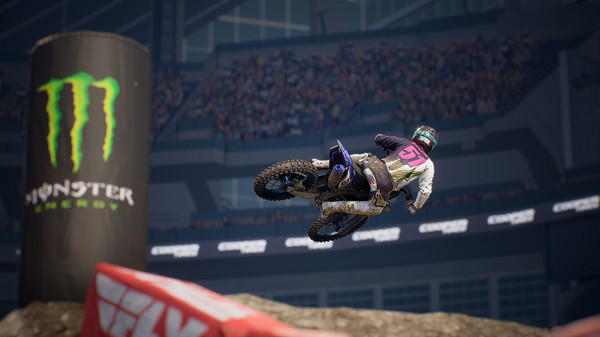 There are several different ways to enjoy the game, from your standard career and quick race modes to a full-featured track editor. On top of this, you can edit several variable options such as AI difficulty, race length, and even whether or not you run qualifiers. The game has even adapted Forza’s popular rewind feature, allowing you to step back in time to fix any mistakes you might make during a race. You may turn this off if you want the added challenge of perfection, however. You’ll also find a few different online play modes on offer here. There are traditional competitive races as well as cooperative events where you and your friends try to complete challenges on the test tracks.

The menus have a clean modern appearance, making it simple to see your available options. The tracks themselves appear to be accurate recreations of their real-world counterparts, right down to the angles of each turn. You have several camera angles from which to view your race, from the usual back and angled views to a first-person view option. In the first-person view, you’ll be combatting the dirt that flies up to cloud your vision, making it harder to see where you’re going. This dirt effect can be a bit overbearing at times, causing a cluttered view even when no other racers are nearby and your bike isn’t kicking up that much dirt. 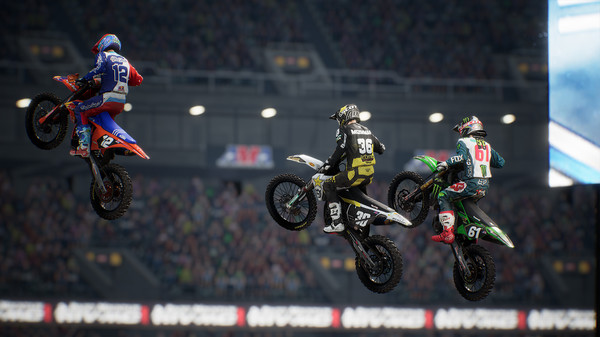 Now that the basics are out of the way, it’s time to dive into the most important part of any simulation, the physics. On the ground, you’ll need to manage your speed carefully. You’ll feel the weight and speed of your bike as you balance your speed in such a way that you can stay on track during the many twists and turns of each track. Some tracks have tight hairpin turns while others showcase wide flowing curves. Managing speed is vital in these situations. You might be able to get through some of the more generous turns at unrealistic speeds, but such is the nature of videogames. In the air, you’ll find yourself floating slightly. This can result in some unrealistic trick maneuvers, but it also means you should have more than enough air time to pull off almost anything you want, within reason of course. The biggest point of advice I can offer is to watch your landings carefully. Misjudging your positioning and landing slightly wrong may not cause you to fully bailout, but it will kill any forward momentum you may have had. This is most important and noticeable during each track’s rhythm section, a portion of the track with many consecutive jumps in a row.

Just like many other sports titles, there is a variety of DLC on offer on top of the base price of the game. In total there are 5 additional content packs at the time of writing this review which come to a total additional price of $19.95. These packs are mostly additional customization options for your bike, rider, and custom tracks. There is one glaring addition to the DLC lineup, the Monster Energy Cup. This pack alone is an additional $5.99, and to be completely honest, it should have been included in the game as it is the namesake championship of the game. This would be like buying an NFL game that charges you extra to play in the Superbowl. 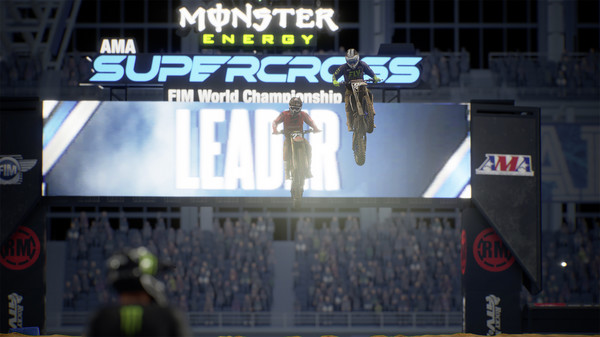 In the realm of overall performance, the game runs flawlessly. With a solid PC, you shouldn’t notice any slowdown or graphical issues. As for online performance, we see a very strong net code. You may only notice stuttering or warping under the worst of network conditions, which is highly important for this style of game.

GlitchedVision gives Monster Energy Supercross The Official Videogame 3 a Drastik Measure of 6.5 out of 10.0 (65).

Honestly, if the Monster Energy Cup were included in the base game, we would be looking at a higher score. Everything else holds up quite well, and I could strongly recommend this game to anyone who loves Supercross racing, or just anyone who wants to experience a physics-based racing simulator. The physics feel a lot better than they may look, so if you’re at all curious, pick this one up for yourself.