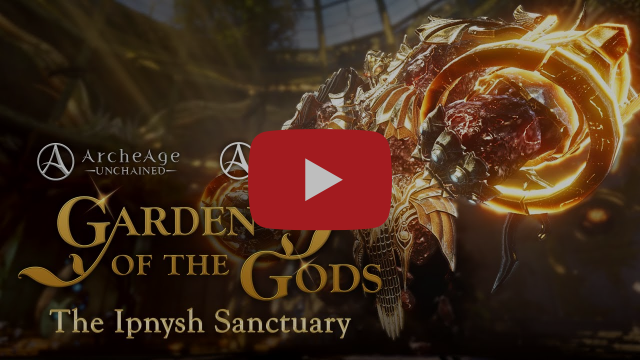 Hamburg – July 30, 2020 | The world of Erenor is growing again! gamigo and the ArcheAge team are pleased to announce the imminent arrival of Garden of the Gods: The Ipnysh Sanctuary launches August 13th, 2020. Players will find challenges around every corner of the brand new Ipnysh Sanctuary that is packed with fearsome foes. Along the way they’ll be able to collect new and powerful gear. In addition, Unchained players will score some generous discounts on Garden of the Gods should they choose to purchase one of the most breathtaking expansions in ArcheAge‘s history.

The new dungeon is located on Aegis Island and can be accessed by completing the main storyline in the Garden of the Gods expansion. It offers thrilling challenges for daring adventurers in search of the new Immortal Warden gear that comes with a variety of additional effects to the players’ skills.

Players can also take a break to participate in the Mistsong Banquet during its second season. There are new quests and rewards players can complete for a limited time.

With the Gods’ Authorities, a mighty new feature will be added to Garden of the Gods, granting skills to the heroes or buffs to faction members which can be utilized in battle against enemies. The maximum number of players in this zone will also be adjusted to 150 per faction to ensure a great experience.

Lastly, players will find some additional balance changes to Skillsets such as Vitalism and Switfblade that will grant more freedom in building a unique character.

This is a huge update that is sure to please everyone! Keep an eye on the ArcheAge official site as more details are revealed.

Editors: If we can assist in your coverage of this exciting addition to ArcheAge, please don’t hesitate to let us know!

About gamigo:
The gamigo group is one of the leading publishers of online and mobile games in Europe and North America. The company’s diverse game portfolio includes free-to-play titles such as ArcheAge, RIFT, Trove, Defiance 2050, Ironsight and Aura Kingdom, as well as the recently launched buy-to-play game ArcheAge: Unchained. Counting more than 400 employees, gamigo is one of the largest german companies in the gaming industry. Besides its 5 german locations in Hamburg (HQ), Berlin, Cologne, Münster and Darmstadt, the gamigo group also has branches in Warsaw (Poland), Istanbul (Turkey), New York, Redwood City, Austin, Bellevue (US), and Seoul (South Korea). In addition to gamigo AG, the group includes the subsidiaries WildTangent, Aeria Games, adspree media, and Mediakraft Networks as well as the brands GameSpree, Infernum, Intenium, Looki, and Poged. The company strives to grow not only organically, but also through acquisitions. Since 2013, it has made more than 25 acquisitions, including titles, gaming and technology companies as well as individual game assets.