Death Stranding is a very unique title from Hideo Kojima and his company Kojima Productions after they split from Konami after his work on Metal Gear Solid V: The Phantom Pain. After years of hearing his project; it came out last year on Playstation 4 but now is finally on PC. Death Stranding brings what Hideo Kojima is known for, a deep story with a quality experience. The use of famous actors looking like themselves while acting in-game in their roles really brings a movie-quality experience. This includes Norman Reedus, Guillermo Del Toro, Mads Mikkelsen, Troy Baker, and more.

The gameplay of Death Stranding can seem simple or boring at first and I went in thinking it’s just going to be boring, drab, or is it going to be complicated and silly. I was surprised how much I enjoyed a game mostly being a delivery man on foot. In the game, you play as Norman Reedus’s character Sam as you deliver packages between few remaining settlements of the once The United States not just for supplies for them but to connect them once more in some form of unity. You take these packages through rough terrain on foot and when you’re able to even by the use of vehicles. The complexity of doing this comes from navigating the terrain as its very realistic in tripping or losing your balance, even more so large and heavy loads. Rapidly turning or just moving carelessly can make you lose or damage your deliveries. Adding to the difficulty is the ladders and support equipment you will use will have to carry as boxes on top of your deliveries. You can manage your cargo and items on yourself to help balance but most times I felt the auto function was better than doing anything manually to your cargo. 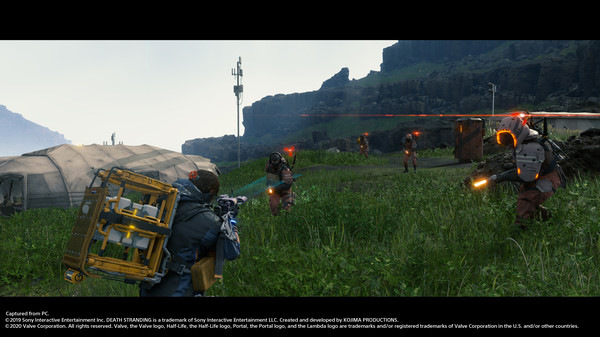 The sci-fi feel of the game makes the earth you are on almost seem like a strange planet instead. Strange events and challenges including nearly invisible creatures of death and rain that slowly damages and destroys your items bring a suspenseful feel that the peacefulness you see can bring death or danger at any moment. When having larger more cumbersome loads you will lose balance, trip easier, and steeper places are harder to traverse. You have to actively pay attention to your controls as it will prompt to lean and allow you to scan to see if the terrain is going to be trouble but you can do these before the prompts even. The gameplay felt very rewarding and risky furthermore the enemies even felt more rewarding even if it was just defeating some bandits trying to steal my cargo or avoiding or defeating the mysterious supernatural enemies knowing only as BTs. Though your traveling you will find randomly lost cargo to get more credit with their respected owners, leveling these up fully can unlock higher grades of equipment or cosmetics. Leveling your grade as a porter will gain more personal bonuses including better balance.

The detail of the gameplay may be offputting to some as it has a simulator quality to it. What changes up the game is the online play. So much so I would argue that if you were not going to be connected online to not pick up the game. As the game goes on you gain the ability to construct objects out in the field. Not only do these objects help you but anything you build or objects like ladders you lay down can be used by other players online. You can also use other objects players have built. The online co-op like play of the game shines further when you have to help each other build roads or when a player builds an expensive project like a bridge over a rough gap or river. Packages and equipment can even be donated to that location online for other people to deliver those packages for credit or for items they can use. Even though it was a single-player game I felt like it wasn’t even if you never see the other players. The info icons warning of dangers and the objects made by other players as well as me helping with my own made it feel we are helping each other go through and conquer this demanding environment. At first, you must visit the new places and connect them to the network to unlock the online help function of the game. Some objects will be NPC related or in your game as they show up in blue text but the online ones will be green in their color text. NPC cutscenes after successful deliveries can be overly talky or showing too many stats or repetitiveness as it’s all broken down. I found myself skipping or passing though most filler text as I did extra side quests then the main ones. Everyone pretty much says the same things and excited about what you are doing for them. Long as you don’t damage the packages and don’t take forever doing it you will get the max rank easily to get the most points from the quests. 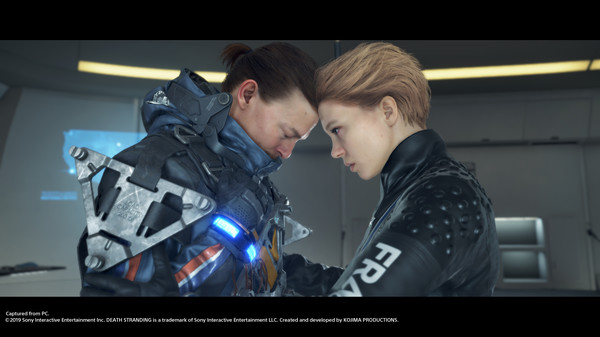 The apocalyptic feel of the event called the Death Stranding and the supernatural veil of the realm beyond death’s door to it adds a horror-like feel to the game but one that is enjoyable to me and I hate horror like games. The suspense of it all and the amazing graphics couple with the music does a lot for the game. Death Stranding’s story is odd and interesting I can not tell too much more that wouldn’t spoil items or reasonings in the game for them. The story is told in parts though those you meet and the flashbacks you experience. Slowly learning of the motivations and desires as each one tries to go forward in the life of the Death Stranding effects. The story takes you going from the east coast to the west coast as you try to connect the settlements of the former United States. Through the journey, you learn more about the Death Stranding and ways to live and deal with it. The main theme revolves around connecting with each other and the online play furthers this notion. The music from the bands and the music that plays randomly really give the feeling of the game. The visuals are stunning and I was surprised how well optimized the game is. Bugs I ran into where rare and besides the odd crash I did see rendering bugs, mostly where the outside of buildings or the shell of it disappearing but this was fixed on restarting the game.

Hideo Kojima’s style really shines through with the high quality and subtle story with gameplay that is surprisingly a challenge and something very different. Some may not enjoy or may find it boring but the story and the game fit perfectly to the gameplay. It is a simple concept but its complexity may confuse or angry many trying to rush through or trying to collect everything they come across. Fans of Hideo Kojima and his work will not be disappointed while some will not enjoy this unique game. I wish I could compare it more other games or genre’s but I feel story-rich adventure game does the trick. As the game continued I felt myself getting more invested and playing more with interest. I wasn’t expecting to enjoy it more then I am now. The online co-op the game adds makes me wish for more like it in more single-player games. Though isolated and alone I never felt I was doing it “alone”. I felt everyone else was helping me try to progress through Death Stranding and me as well as giving back to help others as well. The spins the game takes left me happy even if some of the things seem repetitive it was always very rewarding.