The world of SNK fighting games has a rich and deep history, starting back to the arcade cabinets of old. This history stems from several franchises, including the formerly forgotten Samurai Shodown series but with the remastering of the original games for gamers all overcame a new and revitalized look at the past of the series. Samurai Shodown is a weapon-based fighting game developed and published by SNK. This reboot to the series aims to keep what made the 1993 original and its sequels while adding some new features and does do with some mild success.

Like a narrative being told to preserve itself in history, the story for Samurai Shodown stems from a tale where your sword was your legacy, and the story, as odd it can come off, tells that legacy well enough. It is the 1700s and great darkness has begun to creep across the land, sending weapon-wielding warriors from all over the world out to seek it out. These warriors, known as samurai, fight each other for the right to fight against the great evil and ultimately end its reign upon the planet. The story mode is different for each of the characters of the game, so while it seems this a simple explanation, it just rolls out this way. While I like the presentation of the story and how it gives the players a bigger number of ways to see how the story ends across the board, it does leave itself with a few hindrances, the first being the difficulty. The game launches with the difficulty of three and can go up to five, however, I found I had to bring it down to two to even make decent story progress because the ai used in Samurai Shodown acts similar to Killer Instinct‘s infamous kyle difficulty, acting as a learning machine and at times, countering me more than I myself could get a hit in. Add to this that the game’s final boss was more like a multi-stage fight then a traditional boss fight, closer to the harder but not impossible fight at the end of Skullgirls story mode and you have a recipe that can succeed but needs some tuning in the long haul.

With weapons drawn, the gameplay of Samurai Shodown has many unique features only to this franchise and some decent offerings in terms of gameplay modes to follow up with it. To begin, let us talk about the offerings given with the game itself. Samurai Shodown uses two sets of online and offline content, the story mode being an obvious first but also has a 2nd offline mode where you can engage in CPU battles in a variety of ways, such as the gauntlet mode where the player can face an onslaught of CPU fighters until they lose.

Online modes are the usual affair, with a casual and ranked match setting, as well as a more unique CPU ghost fighting mode where you can fight ghost CPUs of other players, as well as take on a one hundred man ghost CPU challenge. The big downside to the online for Samurai Shodown is the connections when in non-ghost CPU battles, as in the number of games I tested in ranked mode due to no one have casual rooms it seemed at the time we’re fifty percent good, with little input lag and the other half poor, with input lag like crazy.

These modes do not matter much without the mechanics though and Samurai Shodown has one or two mechanics worth bringing up that make it different from other fighting games on the market. The first mechanic of note is a power bar that when triggered and triggered again, can activate a special power move. The player does receive some type of increased damage buff on combos during this time I noticed as well but it was not as strong as it would seem, with some characters special moves requiring additional button inputs to trigger while in the mode. 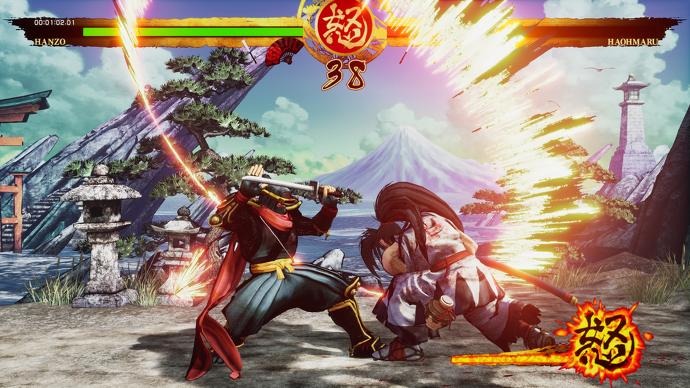 The last big mechanic to note is the weapon drop and pickup mechanic, which can happen in two ways. One way is a clash mechanic, where the loser of an input battle automatically drops their weapon while the other is a more powerful attack that when it hits the opponent, makes them drop their weapon. Picking up the weapon is important, as you do considerably reduced damage when you don’t have a weapon and can be countered much easier from what I have seen.

As with all fighting games, there are some negatives and Samurai Shodown is no exception to this. To begin, let us talk about the balance of the game. While I felt the game does have some level of balance, some characters do too much damage and some do too little. The DLC characters are a great example, as some are fairly balanced and others are less so, ranged characters are a big note on this. The other negative point, which I mentioned earlier in the review, was the difficulty level and the player punishment for lowering that difficulty. The game has it set that you should be playing the game on at least level three difficulty and if you can’t, you lose out on some features of the game like the ability to make ghost CPUs. This feels like big punishment for newer players or those who are casuals to the fighting game genre, acting as a soul style of “get good” barrier.

Like a breath of fresh air, the art style and visuals of Samurai Shodown are a mix of modern animation with older line brush style techniques. Visually, it is an impressive feat, as modern animation styles can look flat and less detailed but by adding the thicker black borderlines to the character models and level of detail that comes with it, you create a hybrid of the two art styles that stand out. The backgrounds get a similar treatment, with that level of detail and using just the right amount of lighting to better show these effects. Something I do not normally bring up is gore or level of how bloody and beaten up a character gets during a battle, which Samurai Shodown does well, showing blood splatter on the floor and leaving bloodstains on the characters clothes, though these do fade a tad too fast in my opinion.

With a much more eastern style flare, the music and soundtrack to Samurai Shodown are simple but situational, making the player feel they are in that location. Musically, I felt this was one of the best ways to go with a soundtrack, as while it plays in the background, it is not front-heavy and sets the tone of the zone your in. Using many not normally seen instruments from the eastern culture, like the pan flute as an example, give it a unique yet chilling vibe that you don’t get from other games.

As the dust settles from battle, I found Samurai Shodown to be a different take on the fighting game that works in some areas and misses the mark in others, leaving it in a mixed bag state. The multiple stories, use of a weapon-based combat system, a plentiful amount of offline content, use of the line brush art elements, and a soundtrack that commits to the game’s eastern roots make this a fighting game worth checking out in the very least.

DarkLunarDude gives Samurai Shodown a Drastik Measure of 7.8 out of 10.0 (78)

For the price of 49.99 on the Epic store, Samurai Shodown is a solid pick up for fans of the previous games in the series, as well as newcomers due to the story taking place prior to the event of the first game. However, AI difficulty and a less than stellar online experience could hamper a lot of what makes fighting games an experience all their own.