In Other Waters is a story rich adventure game that places you as an A.I companion to a xenobiologist named Ellery Vas. Though guiding Ellery in the ocean of the planet Gliese 677Cc, you and Ellery search for her friend Minae Nomura while documenting the life in the ocean of the planet. In the indie title, you scan around and move Ellery toward parts of the ocean’s floor while managing both the oxygen and power for the environmental suit. In Other Waters looks simple but it uses storytelling and information to draw the player in as if it’s more of an interactive story to provide a nice experience even if it could be seen as a short one.

In Other Waters may seem confusing at first as the layout is simple but can be confusing to understand what you can and can not do. The tutorial is ok but isn’t the best and just learning the basic function of scanning and moving was puzzling the start. When you scan you see icons you can click to scan further. This includes safe passages for Ellery to follow. All movement is preset in those waypoints you uncover from scanning. On top of that, you will have to click and drag a circle to then connect the pathing if you want to select a different path. There are shortcut keys but it is hard to grasp the idea of it at the start. As you scan unidentified objects you slowly gain more knowledge of them and can even collect samples from some locations. These samples work as your items and consumables to help complete the game. Items can open paths or make it safer to travel through. 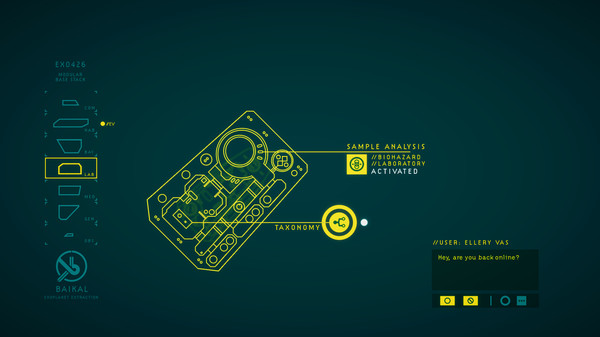 There is no combat in In Other Waters as dangers are more environmental then of creatures. Though the waypoint system the game can seem linear it still adds a sense of adventure and exploring as you track down your objective and study the wildlife. The only main map is back at your base as you only see around you. Without the use of a world map as you adventure gives you a feeling of being lost while trying to focus on the key direction you must go. I would say the challenges are more about orientation skills, pathfinding, and uses the samples you collect to open or prolong your adventure. Throughout your adventure, you will find spots to return to base, download maps, and refill your power and oxygen. I did feel happy when I did reach one of these or my goals as its just one of the many waypoints your scanning and moving to. In Other Waters may seem like it has issued just by that but I’m happy to say that it really only the few I did mention. The gameplay seems odd at first but it did provide a nice unique experience.

The visuals of In Other Waters will seem very simple at first but it did play smoothly. Mixed with the music that made you feel alone or isolated as you explore the ocean did fit. The changes in the music fit perfectly with the vibe in the areas you explore. The movements of the dots and icons gave a feeling of you being the A.I. seeing the data Ellery’s environmental suit provides. They were very fluid and animated and I never got a sense I was looking at a lifeless ocean around Ellery. Even if you seem to travel at a slow pace your eyes will be fixed on the amazing amount of info even each creature, waypoint, or just story as Ellery talks to you. The way the gameplay and visuals helped the story and really helped picture what I was seeing as just info and dots. As I was playing and even when I finished I was more curious if one day this game could be return in higher graphics or even as a 3rd person perspective. The story itself I found ok but still felt wanting or unfinished but I still felt I enjoyed the story and the extra details that were written and provided. There was no storage of info as everything you will catalog has a good detailed description of it at your base as you research them. 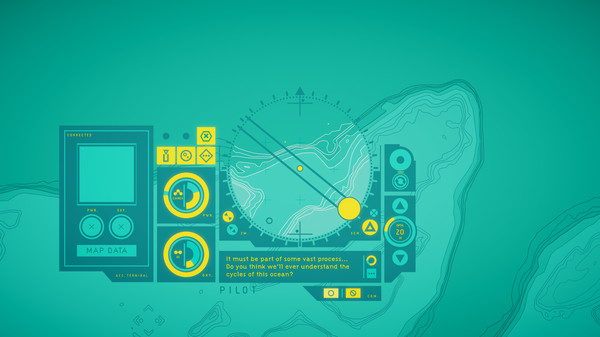 In Other Water felt like a more interactive visual novel with some thinking involved in its gameplay. The system of gameplay it used worked great for the game and I hope more is added to the story in a sequel or even an expansion to what has been created. I would fully recommend those who love adventure games that are more story-based to pick this one up. There is no fighting or the like in this game but I feel it didn’t belong in how it was done. Though the game was very short I didn’t feel they had useless filler either. I would take that over how many games add a useless collectible or collectibles that don’t seem to fit in well to the point it feels like a time-waster/grind. I spent over 3 hours to complete the story but I’m not disappointed in the time spent and I do continue to 100% the game as I track down the biology of the ocean I missed. I went in not expecting much from In Other Waters from how the gameplay looked but I’m happily was corrected from a nice story and fitting gameplay.