Indie game sound producer Joonas Turner seems to love working on pixel art games and roguelikes. (That’s a good thing, considering I love both types in equal measure!) He’s worked on the Badland series, Nuclear Throne, Downwell, Noita, and ScourgeBringer among others — a fair amount of which I seem to have played in recent memory because I can never resist the allure of pixel art games.

One of his more recent works involves a rogue-lite with a rather interesting premise. Shoot things, but also…grow things? This is the premise of Atomicrops, made by a small team under the group Bird Bath Games, and published by indie publisher stalwart Raw Fury. Entering Early Access in September 2019, it spent about 8 months before reaching v1.0 on May 28th. 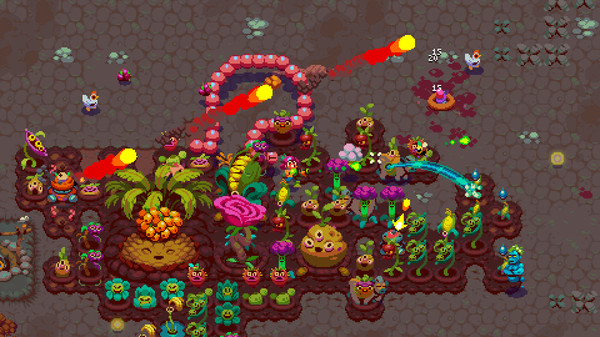 A pretty high-quality animation cutscene sets the setting (hah). You’ve inherited your late uncle’s farm; a neighbor shows you around, then you discover a hatch leading to an underground bunker — at which point a somewhat contrived nuclear apocalypse occurs, killing your neighbor and mutating the whole area, the crops, the critters, you name it. Well, I guess that’s the game name sorted!

There is a tutorial, but it only teaches you the bare minimum; there are a bunch of tricks that you have to discover after a few runs. The basics are easy enough — get seeds, till the soil, plant the seed, water when it needs water, use fertilizer to give better yield, then harvest when done. However, there are a bunch of nuances not conveyed in the tutorial: namely, one of them being the planting of four of the same kind of seed in a 2-by-2 pattern to form a bigger plant for better yield. Your farm will also get rapidly encroached upon by all sorts of critters out to get you and/or your crops, mainly at night, as well as weeds that take a non-zero amount of time to remove. 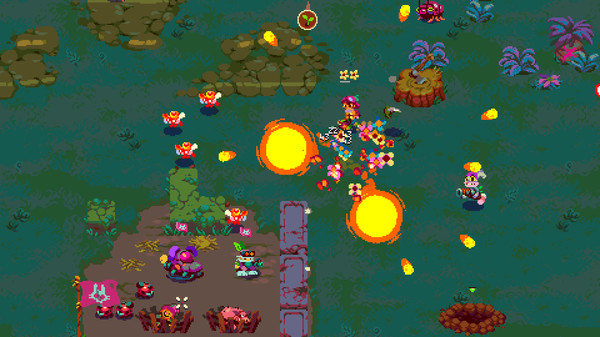 The core gameplay loop persists the same throughout. Your farm is only connected to two additional biomes in the cardinal directions; additional biomes have to be unlocked by acquiring bridge repair kits, with further biomes requiring even more. These biomes have a smattering of enemies, mostly within ‘camps’ where defeating all enemies in a camp grants some rewards, ranging from a few more seeds (where the bulk of your planted seeds comes from), some permanent upgrades a la Binding of Isaac items, and some consumables, which are, erm, pigeon scrolls. Of course.

The game is subdivided into the 4 seasons. Each season has 3 days which thankfully aren’t played out in real-time. You only get a few minutes in the day to explore the aforementioned camps and plant and care for your crops, then the critters come at night to attempt to eat your crops and kill you. While you can leave your farm alone with relative impunity on the first two days, the third day always features an unavoidable boss battle that sucks you back to the farm; notably, you don’t actually need to fight the boss, just survive the night, but of course defeating the boss gives some rewards. There is an additional ‘season’ past the last season, which I won’t spoil here; but after completing that, you complete a run and unlock additional, more difficult years. Great for that added challenge! 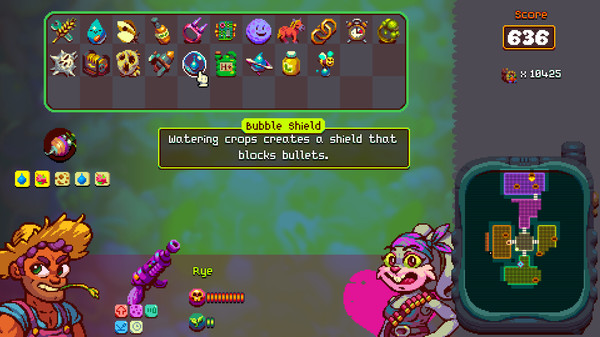 After surviving each night you get a lift to the town market(?) where you get a results screen showing how much cashews (the currency in the game — and also a good pun on cash, ha!) you’ve earned, which you can then spend on various things like more seeds to plant, bridge repair kits, temporary guns that break after a day of usage (as well as upgrades), and then probably the key to succeeding in this game. You’ll likely have chanced upon rose seeds while clearing camps out, from which you use these to grow roses and either buy health (heartbeats, I mean heartbeets — and these are unique in that they can either regain lost health or can potentially nab you a maximum health upgrade when you collect enough at full health) or improve your relationship with up to two randomized characters. Improving your relationship with them lets you earn rewards from them, and eventually, you’ll be able to marry them, having them come back to your farm to assist intending to it and fighting off critters.

After a season concludes you’ll also be able to talk to the Mayor who will grant rewards based on how much cashews you earned during the season. At the higher tiers, you not only get more rewards but you also have the potential to earn cornucopias, the game’s only persistent currency. Using these, you can unlock some permanent stat boosts…or spend them on useless cosmetic cats. Your choice. You also get access to a bunch of other randomized upgrades that can only be purchased after a season (there is an item class called Tractors, which are unlimited use items that require a period to charge — again, akin to ‘use items’ in Binding of Isaac). 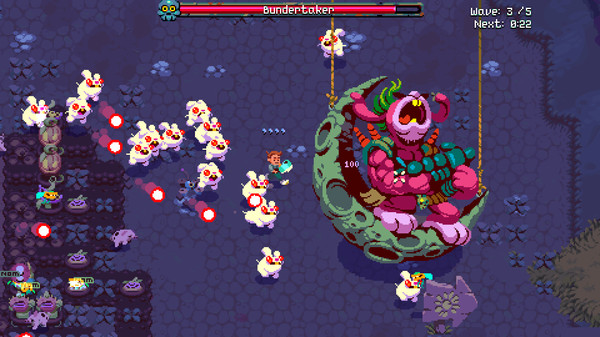 Atomicrops has charm, personality, and humor oozing out of every orifice in spades, and this is rather obvious from the very start. The intro cutscene is playfully flippant, and so are the variety of crops you’ll grow and critters you’ll fight. In fact…are the crops…alive? Yes, yes they are. It’s a testament to how terrific the audiovisual design is because the crops not only look cute and cheeky but also sound rather excited as well, making joyous squeals when they are growing and ready for harvest. The enemy design is also rather whimsical with anthropomorphic animals being your main enemies. All this is done in an immaculate pixel art style that looks incredibly gorgeous, though in my opinion it occasionally suffers from overwhelming visual feedback as a result when there are so many things like enemies, their bullets, and weeds on the screen. This is married to an equally kooky soundtrack that perfectly conveys the farm lifestyle while also being esoteric in its own way.

As far as gameplay goes, it’s a pretty solid combination, one that injects a level of difficulty and requires a modicum of priority management. The farming mechanic isn’t that overbearing, though without knowing of the aforementioned tricks to maximizing your yield it can be rather frustrating to invest so much effort with so little reward at first. This is something that brings a sizable time investment as you discover when best to explore other camps for more seeds and rarer seeds to grow, as well as upgrades, pigeon scrolls, and the like. The marry aspect is cheekily done; having a life-long companion to aid you tending to your farm throws up the most shades of Stardew Valley. Personally, though I really hate that your gun upgrades aren’t permanent; you’d always be forced back to your literal pea shooter after an in-game day, and that gun has a rather limited range so I cannot poke away at enemies from too far away, having to get more up close and personal to kill them and opening myself more up to damage as a result. The consequence is it’s only made gun upgrades worth to buy for boss battles and the extra loot; why waste cashews on the earlier days? At least outside of that, the gunplay feels pretty good for a twin-stick shooter. 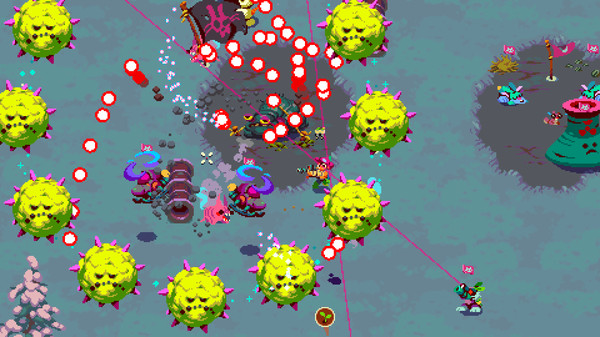 Despite the game being out of Early Access, there are surprisingly some missing features. There are leaderboards, but none of them are online — I believe this is currently being worked on, as of writing. There’s also an oddly missing menu in the options with regards to controls, sticking out like a sore thumb as the options menu will no doubt be one of the first things a player will peruse. Technically the game performs well with no noticeable hiccups or crashes on my end.

Lastly, it’s time to flog a dead horse yet again — Atomicrops is an Epic exclusive, thankfully that won’t be for much longer. It’s especially egregious as there are some in-game achievements, but no way to see what you’ve obtained without firing up the game on Epic, due to the platform still not having support for those currently. I’d also be interested in seeing how the game resolves online leaderboards once the player base is further fractured into Epic and Steam.

Atomicrops retails for $14.99 on Epic (with regional pricing), PS4, Xbox One, and Switch, with a Steam release coming in September 2020. Relative to other twin-stick stalwarts it is competitively priced, with enough tricks up its ‘Frankenstein’ sleeve to stand against the best in the genre. Get it now if you’re craving a wacky new twin-stick, or wait for that Steam release if you don’t like Epic. As for console releases, I’ve been reading conflicting testimonials on how those perform, so do your research.