Spongebob: Battle for Bikini Bottom – Rehydrated is an adventure platform remake from 2003. The original game is beloved as the Spongebob Squarepants game as it reflected the show amazingly well from the humor to the feel of the show. The show itself from Nickelodeon has been running strong since 1999 with many seasons and some changes to the art design though the years. Of all the games that have come out involving the cast, the one from 2003 Battle for Bikini Bottom has been the fan-favorite while still being done in the speedrunning community. This remake is a remake of the truest form as not much was changed from the 2003 release other than a graphic upgrade but does give us more languages than just English this time around. This includes French, German, Italian, Spanish, Polish, and Japanese voice casts and subtitle support for Brazilian Portuguese, Russian, Malay, Thai, Korean, and Simplified Chinese. With the popularity of Spongebob Squarepants still around now was an amazing time to bring this game back out to not only for those that enjoyed the first but to all the current fans of the show.

Spongebob: Battle for Bikini Bottom – Rehydrated starts out almost like the cartoon would start along with the opening song being played as the intro and title screen. The story is about Spongebob, Patrick, and Sandy Cheeks fighting robots run amuck and created by a recurring character and villain of the show Plankton. The robots continue to be created and refuse to listen to him which leads to our heroes have to save the different places of Bikini Bottom and stop the robots. The art design stays true to the show and the added gloss will be more familiar to the show’s current style then the retro style of the first release. Most of the English voices from the are included and the ones that are not can be easily picked out. Mr. Krabs and Mermaid Man are two of the ones that don’t have the original voices. 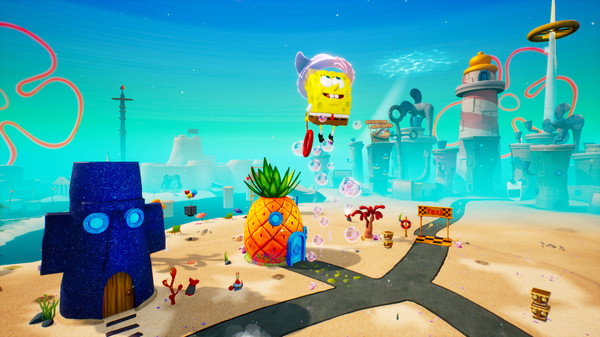 The game does an amazing job giving you the feel of the world as if you are experiencing the worlds you have seen on the show. This includes believable layouts of Spongebob’s house, the jellyfish fields, and more iconic locations they go to in the show. The story itself isn’t from the show so it is a new experience for anyone and it fits nicely with the music they have for each area and the boss battles. The story seems more out there but it sets a nice layout for the robot enemies you have to fight through the areas to give the player obstacles and challenges. Besides the few flaws, it hits most places correctly to anyone that enjoys the show and does it in the same as the shows so all ages can enjoy it.

The gameplay is unchanged from 2003 but I would claim the gameplay holds up. There are very few collector based platforms where you need to find and collect objects. Recently with games like Spyro the Reignited Trilogy there is a want not just for classic good games but great well thought of platforms that both fun and challenging. Battle for Bikini Bottom makes you collect coins called shinies to unlock paths or to get more of the key item of the game, golden spatulas. The golden spatulas you gather from doing the main objectives of areas. These are needed to unlock new areas and overall most of the progression of the game. This is very similar to many collection style games and anyone that has played banjo, Mario or others will understand completely how it works. 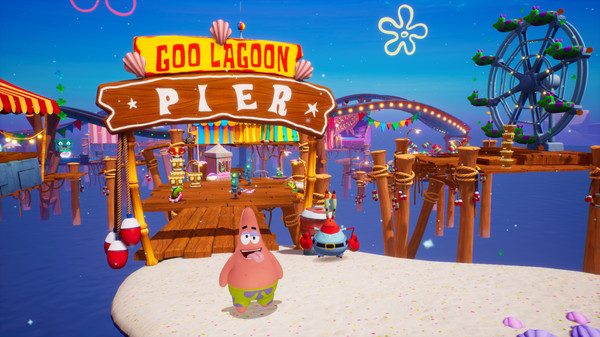 Controls are simple and enjoyable as each other 3 characters have special abilities. Spongebob is the one you will use most of the time but you do use bus stops you find in the stages to swap to either Patrick or Sandy. Every stage you use one or the other with no stage using all three. Some times you can even come back to earlier stages when you earn more abilities for Spongebob. In terms of moving around or doing actions you may feel some clunkiness at times as there are invisible walls and out of bounds. The generous checkpoints and such help smooth out the annoyance that can be encountered. I never felt I was cheated or have to replay a segment I barley got though. For the most part, the game can be casually played and you will get everything needed to progress fast. Later levels do feel more challenging in the platforming.

There also aren’t many choices in using characters in parts of stages. An example of this is in the stage Downtown Bikini Bottom where the roads and ground need Spongebob while the rooftops need Sandy to traverse. The game does quick travel via boxes at the start and end at sediments to return to later and even fast travel in a menu to other stages but you can get a feeling of a linear playstyle then of other adventure platformers. Part of me wishes they did touch up the gameplay or more but at the same time I feel it may lose out of his popularity or charm of it. Boss fights are mostly dodging till you can hit the opening and by no means interesting or fun and I would argue if the boss fights other then the final one got removed the game would be great. 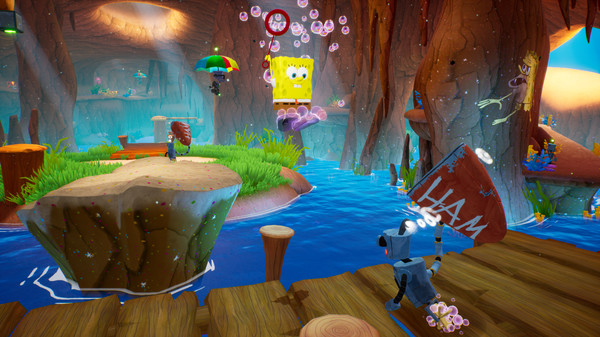 Overall I believe Spongebob: Battle for Bikini Bottom – Rehydrated is a great remake and a must if you are a fan of Spongebob. If your not a fan of Spongebob but a fan of more classic platforms you would still find some joy it in. Spongebob: Battle for Bikini Bottom – Rehydrated uses a lot of references, popular jokes from the show, and feels like a love letter to the series in total while giving an enjoyable game with a nice balance of difficulty. Most games based on movies or shows tend to be par at most but this one is above par. I do wish they would have gone back and tried to get more voices of the show in on this remake in some way or add more stages based on the new Spongebob stuff. I can’t blame the devs for just wanting to make a remaster with all the old stuff to give the feel of the original but to me, audio is just as important as visual when you polish a game as a remaster. Many remastered games of late have set the bar higher to what is to be expected of returning classics and I feel many would be expecting more than a new coat of graphics and languages added. I still would recommend this but I do wish more was added in this remaster.