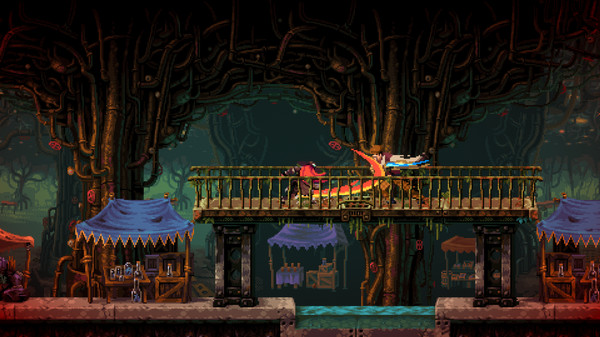 As the growth of Metroidvanias continues to grow we see more and more themes and varieties of tastes in this genre. Enter Gestalt: Steam & Cinder that uses the Metroidvania playstyle and gives it a Steam-punk flair as stated in the title of the game. Made by Metamorphosis games you play as a red-headed female named Aletheia that just wakes up from a four-week-long coma and ready for a new job. In the demo, you can explore the city of Canaan but it is only limited at this time. The first thing that caught my eye was the pixel art of the game that is in the 16-bit generation that was done very well and then uses a higher definition picture while in certain conversations. The combat is very Metroidvania style with a light and heavy attack and a combo that you can do with your saber. Along with your sword, Aletheia has what can be seen as a flintlock pistol but is a revolver type in function with only three bullets and a carrying capacity of 99. I have found that reloading this revolver is awkward with the dedicated button rather than having an empty gun reload on the next shot. As well back-dashing can throw Aletheia looking in the opposite direction at times and can ruin a well-timed counter-attack and in my own opinion, the combos between light and heavy attack need to be more fluid. 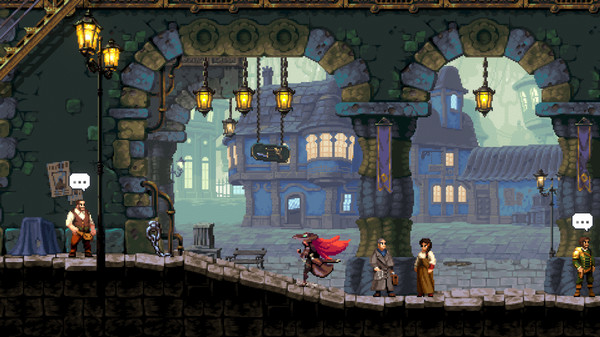 Other than the points previously I enjoyed how attacks can be diagonal for attacking your enemies with accuracy! Speaking of enemies the demo only features two of them right now and a boss and is only around 30 minutes long with reading text and adventuring around town. Though you can go through your inventory all of the items you have now are useless because crafting or forging is not in the demo and leveling is basic, I do however think it was a good idea for the developers to highlight the differences in stats when you level up one out of the five stats you can increase. All in all, I had fun with the demo taking out the frustration of the controls and the awkwardness of the revolver and will be looking forward to its release. For everyone that is looking for a good Metroidvania, I would suggest giving this game a try with its demo that anyone can download in the Steam store now!