From her humble start on the Gameboy color back in 2002, Shantae has come quite a long way and shown the world that even a character who started out simple and can be made into a fun yet complex game series. Now entering her fifth title, it is time to see what kind of trouble awaits the young half-genie. Shantae and the Seven Sirens is cartoony Metroidvania developed and published by WayForward. This game goes back to Shantae’s Metroidvania roots while mixing in some of the more fun gameplay elements of her previous outing, Shantae: Half-Genie Hero. 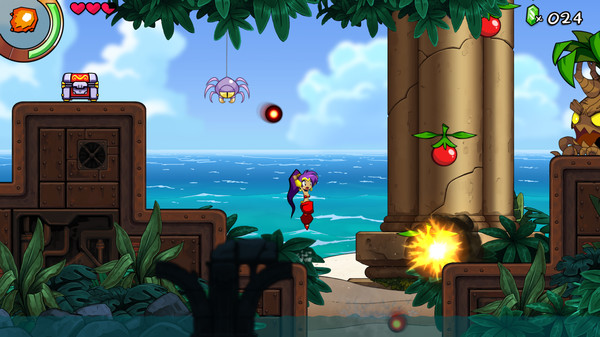 Sit back and relax in those foldout vacation chairs as Shantae and the Seven Sirens story begins in a setting as such, only to get riskier by the moment. We, as the player, take control of Shantae once more as she and her friends land on Paradise Island, being invited by a mysterious mayor to perform in an event with five other half-genies. This quickly falls apart though, as after the other five half-genies disappear when they go to perform, it falls upon Shantae to step in and bring them back. 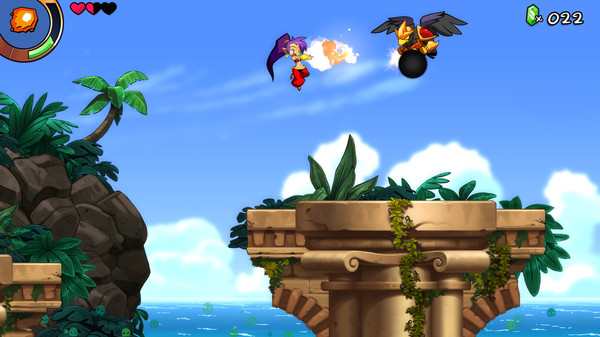 With the plot in hand and an adventure ahead of her, Shantae and the Seven Sirens story becomes a focal piece of this title, though it does fall short on one or two areas storywise. The first shortcoming is how short the story was compared to previous entries in the Shantae games. While not as short as it could have been, it does fall about two to three hours shorter than both Shantae: Half-Genie Hero and Shantae and the Pirates Curse. The final shortcoming I found was more of a minor footnote but some pieces of the story can supersede each other at times and cause confusion at some story segments. 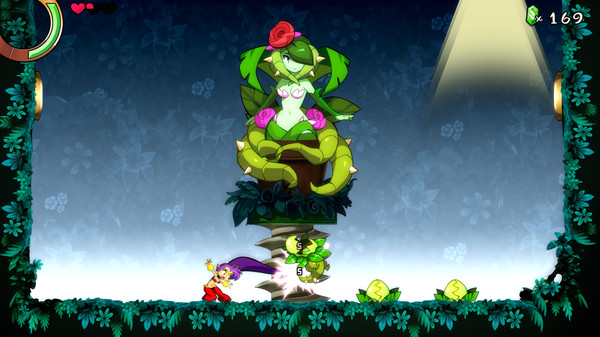 With her hair ready to whip, the gameplay provided by Shantae and the Seven Sirens is a mix of the best features from her previous two outings, with some unfortunate imperfections that snuck their way in and some new mechanics that add a breath of fresh air to the series. Let us start with some of those new mechanics before delving into the changes to the older portions added in, start with the card system. 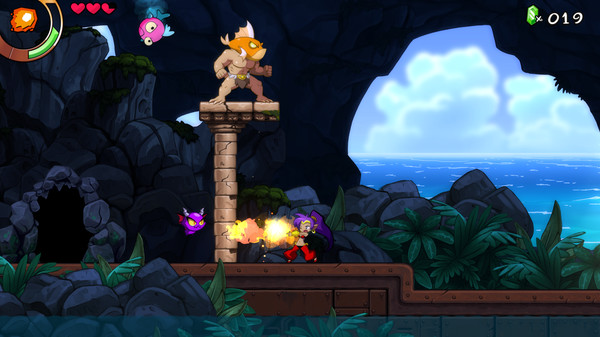 Added in as a surprise twist, Shantae and the Seven Sirens added a card system where enemies can drop cards, and once enough have been gathered, you unlock the ability to equip that card for a boost to one of her abilities or a defense to something that can hurt her. This could be seen as a double-edged sword, as I will talk about later but this gives the player a fresh twist on how to play the game and in a sense, make their own playstyle for Shantae outside the means of item upgrades. 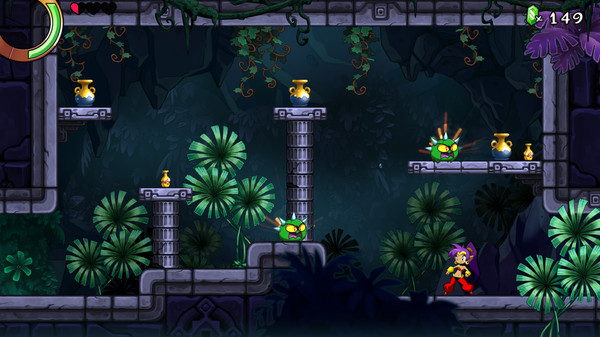 Another new feature added to Shantae and the Seven Sirens is the warp rooms. When Shantae enters a room while exploring or visit a city on the island for the first time, she gets the ability to teleport to that location. This replaces the birds’ whistle or flare gun mechanic used in her previous adventures, which could be seen as a negative but I have found food drops were much more plentiful this time around, so you will not miss these items as much. 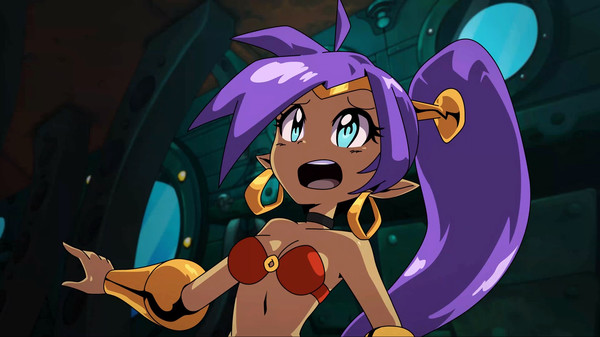 Hopping back to the tried and true, most mechanics from her previous two adventures remain unchanged if not only slightly tweaked but the difference is how Shantae executes her dances and what replaces them. Instead of the traditional dances like in Shantae: Half-Genie Hero, you get fusion medals throughout the game which allow Shantae certain forms if the setting is right. This allows for her dances to be replaced with a newer, more passive use of abilities, once obtained, such as the ability to see hidden objects at the cost of some Shantae’s magic meter. 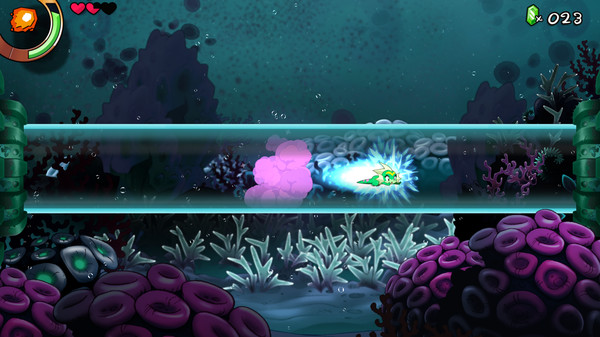 With a mix of the new and old alike present, some things can feel lost or potentially game-breaking, as is with a few concepts here. The first concept I already mentioned earlier but some of the cards added to the game can break the game. These cards are few and far between but when you find them, they can change the game experience for the player. Another concept I felt was out of place was the lack of quest NPCs. You get a handful or two scattered across the game, which helps progress the story along but other than that, it feels like they wanted the player to be more observant of the world around them and talk to every NPC for the island’s flavor text if you will. 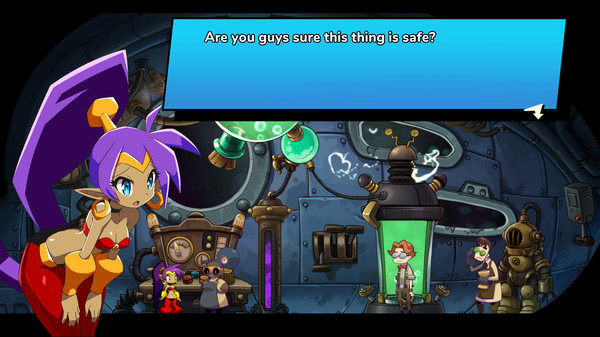 Before we go into the visuals, there are a few technical issues with the game I want to address, in hopes we eventually get a fix for them. The first one is the game freezing at startup due to the background process being automatically set as a priority level above normal. This has been an issue since the PC launch and while a workaround has been found by the speedrunning community of the game, in which you have to lower it down to below normal every time you launch the title, the hope is it gets patched soon. The other issue plaguing the game in its current state is long loading times between areas, up to 10 or 15 seconds in some instances. This can be ignored for the most part but for those wanting to complete certain endings or even speedrun the game, it is taking up valuable seconds, and once again, hopes to see this get patched soon are high. 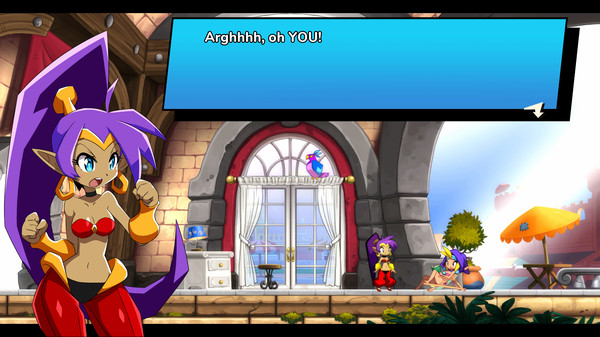 Following the more cartoony animated style of Shantae: Half-Genie Hero, the presentation of Shantae and the Seven Sirens is bright, colorful, and easy on the eyes. Visually, I appreciate they stuck to their guns and focused more on improving the animation style they had instead of jumping ship to a new art style altogether. The focus on this allowed for the more bright and colorful color palette to bring life to the games living backgrounds, with moving ocean waves and swaying trees, as well as enhance the dark and mysterious theming of the underground of Paradise Island. 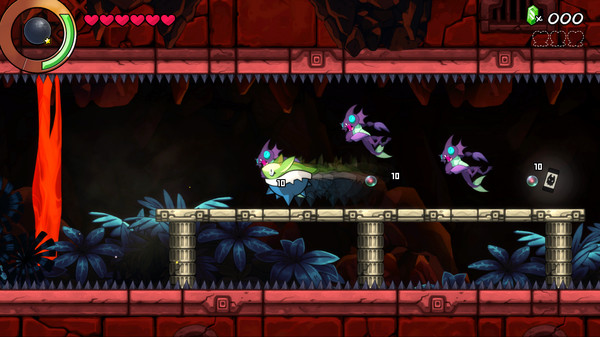 Prepare your ears for some island-themed tunes as Shantae and the Seven Sirens soundtrack plays like a trip to the islands in many ways. Musically, I like the transition of the overall soundtrack and instrument typing used here, as it plays off the tropical island vibe the world around Shantae gives off, only going more fast-paced in places like the siren lairs where the tone is more immediate. The instrument provided for these tracks do match for the most part to previous Shantae titles but throw in stuff like the xylophone, snare drum and a few others to add some nice variety to the mix.

With our island getaway winding down, Shantae and the Seven Sirens stands out from previous entries of the Shantae series with its new game mechanics, tropical island theme, and interesting story, easily being the best Shantae game to date for pc owners. The interesting story, exotic location, Metroidvania style gameplay, unique card buff mechanic, bright and colorful visuals, and a more island-themed soundtrack make for an experience that I can easily recommend, hindered only by some technical and gameplay hiccups.

DarkLunarDude gives Shantae and the Seven Sirens a Drastik Measure of 9.0 out of 10.0 (90)

For the price of $29.99 on Steam, I can easily recommend Shantae and the Seven Sirens to any Shantae fan and those looking for an off the beaten path Metroidvania experience. However, it is important to note that at the time of this review is written, the game freezing at launch issue is still prevalent and might deter some buyers until it is patched.