MONSTER SALES AND A FREE UPDATE FOR WARHAMMER: Chaosbane! 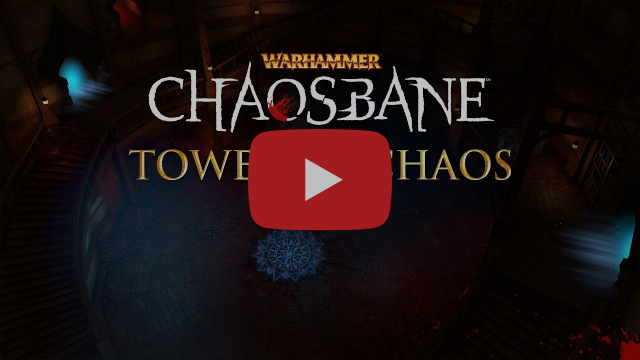 Lesquin, France, May 28, 2020 – NACON and Eko Software are pleased to announce that Warhammer: Chaosbane is included in the “Skulls for the Skull Throne 4” sale and gaming festival on Steam from May 28 to June 2. On these days, all editions of Warhammer: Chaosbane are available for 60% off. Click here to access the sale.

To accompany this great event, a free update is available from today for all players. Check it out now in this video with commentary by the game team:

https://youtu.be/HcHnDSZka8w
The update includes many enhancements requested by the community, such as a new PC interface and control modification settings. New content has also been added: the new Tower of Chaos has been introduced, an “infinite tower” mode where the objective is to climb as high as possible to find better loot while facing increasingly powerful waves of enemies. The higher up the tower players go, the better the rewards. Eight new enemies can be found in the Tower of Chaos.The following enhancements are also included in this update for Warhammer: Chaosbane:
The first hack and slash to take place in the Warhammer Fantasy Battles world, Warhammer: Chaosbane plunges the player into the heart of the Old World. Set just after the Great War against Chaos, a bloody conflict which ravaged the Empire of men, civilization teeters on the brink of collapse. Players will embody a human, a High Elf, a Wood Elf, a Killer Dwarf or a Dwarf Engineer, and discover the iconic locations of the Warhammer Fantasy Battles universe that has captured the imaginations of millions of fans across the world.
The “Skulls for the Skull Throne 4” sales run from May 28 to June 2, 2020. The free update is already available on PC, PS4™ and Xbox One.
Find us on Facebook, Twitter and YouTube.

About NACON
NACON is a company of the BIGBEN Group founded in 2019 to optimize its know-how through strong synergies in the video game market. By bringing together its 8 development studios, the publishing of AA video games, the design and distribution of premium gaming devices, NACON focuses 20 years of expertise at the service of players. This new unified business unit strengthens NACON’s position in the market, enables it to innovate by creating new unique competitive advantages and achieve its ambition to become one of the world’s leading players in gaming. https://corporate.nacongaming.com/

About Games Workshop
Games Workshop® Group PLC (LSE:GAW.L), based in Nottingham, UK, produces the best fantasy miniatures in the world. Games Workshop designs, manufactures, retails, and distributes its range of Warhammer®: Age of Sigmar® and Warhammer® 40,000® games, miniature soldiers, novels and model kits through 507 of its own stores (branded Games Workshop® or Warhammer®), the www.games-workshop.com web store and independent retail channels in more than 50 countries worldwide. More information about Games Workshop and its other, related, brands and product ranges (including our publishing division ‘Black Library’ and our special resin miniatures studio ‘Forge World’) can be found at www.games-workshop.com.

About Eko Software
Established in 1999, Eko Software is an independent game developer and publisher based in Paris – France. Eko Software is developing games on all major gaming platforms (consoles – PC – Smart TVs). Mainly focused on development and content creation, the company develops games for top publishers or creates new IPs that are published in partnership with worlwide publishers or self-published through digital distribution channels. IPs created by Eko include Aqua Panic!, Wanted Corp., SPRay, and How to Survive. For more information on Eko Software and its products please visit www.ekosystem.com.