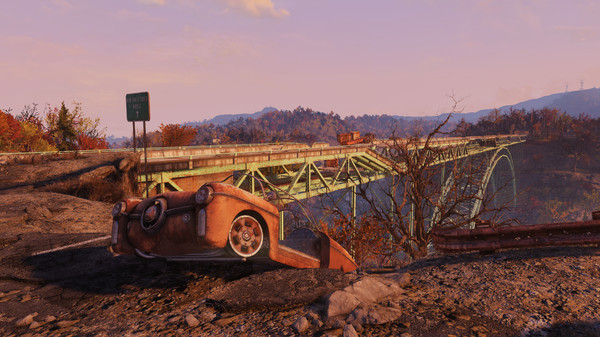 Fallout 76 Wastlanders edition brings yet another Fallout game to steam from Bethesda. I don’t mean that to sound negative at all, but Bethesda games always have some issues at launch. Personally, there was only one problem during my time playing it for review, and that was getting stuck falling off some stairs between a wall, which forced me to have to fast travel to get out of it. Anyway, Fallout 76 Wastelanders brings what most enjoy about a Fallout game to the open-world survival genre and making it multiplayer. I also need to mention that Fallout 76 is the first fallout game I have played. Not that I have not seen various content from streamers on twitch from that other games. 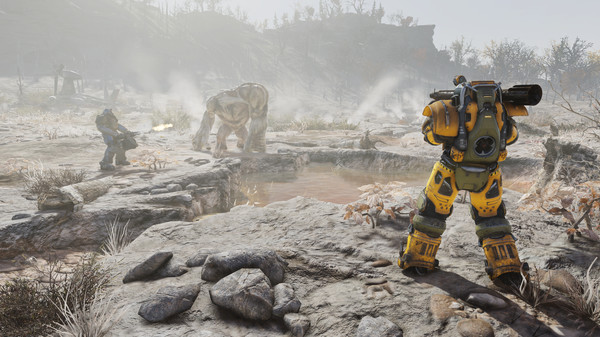 You have two modes to the game, which is the open-world survival and the battle royale mode. As far as this review goes, I will cover only the survival mode. Now the open-world survival mode is also split into public and private worlds. The private worlds are only available if you or someone else your playing with have a Fallout 1st subscription. It is available for $12.99 a month or $99.99 for a year. As with most subscriptions, it auto-renews for the same price after it is up. It comes with several benefits besides the ability to have a private world, which is not limited to extra atoms a month and unlimited scrap storage. 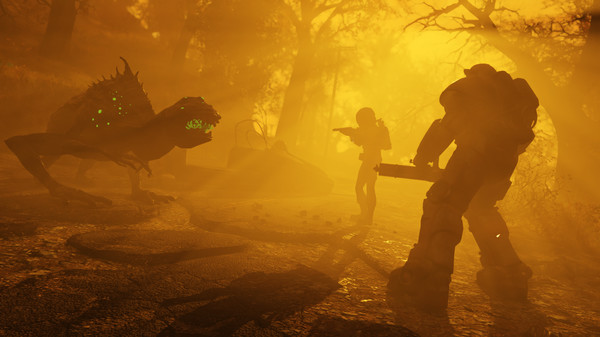 The core thing for me about it is only worth getting it if you’re going to spend a significant amount of time playing the game. By this, I mean thirty plus hours a week on the game and have people playing with you. Personally, playing on public servers is quite alright with me, and I did not run into any other players that would ruin my day or screw with me just because they could. That stuff comes with the territory of the genre, and yes, while it may suck for it to happen to you, it’s not the end of the world. Don’t get me wrong, I would rage and swear if it occurred to me, but in the end, it is a game, and these things can and will happen. 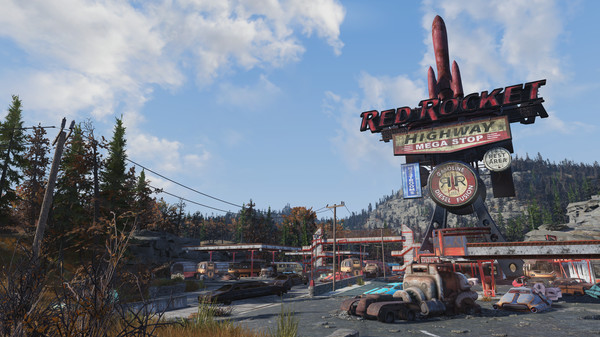 Basically, with me being a casual player in the game, the subscription is not worth the money for me to spend on it. I maybe would play the game no more than eight hours a week. That doesn’t mean the game is terrible. I have so many other games that I can only fit it in when I can. Now that being said let us move onto the central part of the game, and that is the survival mode. The game begins like most fallout games waking up inside a vault. You first create your character by manipulating every feature that your character has down to the thickness of your lips. 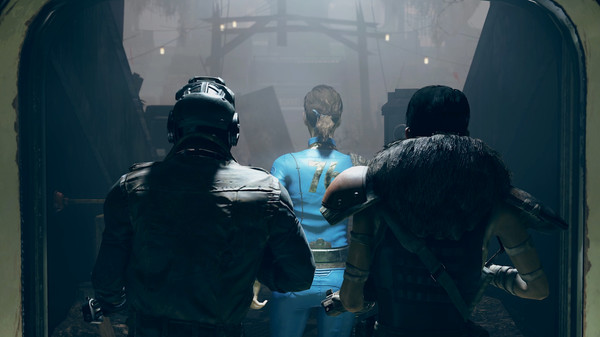 I do love character creation tools that give you this depth of choice. It just allows you to create your ideal character and for some, it may take a few minutes but others can take hours obsessing with their look. This is one if not the best things about Bethesda’s games lately that have been the character creation tools for me. After creating your character you are guided through the vault only being supplied with your basic stuff to get by with and thrown out into the world. From here, you can begin with the intro quest or start exploring and seeing what you can find. 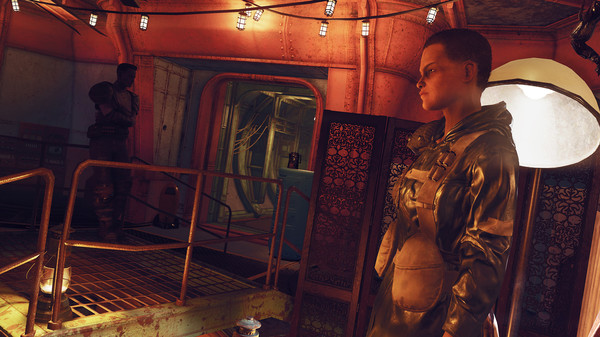 That is why precisely I love open-world games like this. It is the freedom of choice you have on how you want to handle things. Now there is so much to do in the game that I didn’t manage to progress very far at all in the world during my review. I did manage to complete one the first quest chains you run across though and advance the main story questline. Most of my time was spent just exploring and run back and forth to accomplish parts of the quests. Even after you finish all the quest lines in the game there are world events that pop up every so often as well to keep things somewhat fresh and give you things to do. 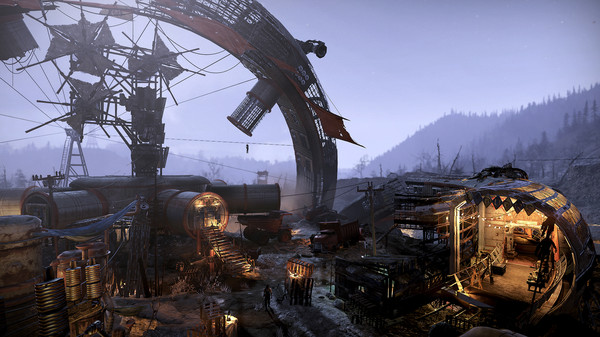 For an example of one, the favorite of mine was the Event: Fertile Soil. It takes place just outside Flatwoods one the early areas of the game. Anyway, it takes place at an Agrigutrual Research facility owned by Vault-Tec. It seems that the robotic farm hands that run it have gone out of control and are attacking humans. You are tasked with shutting down three of the overseers outside the facility. Once you do that, you are then tasked with going inside and finding a way to change the targeting parameters, so humans would be safe. Now the reason this was my favorite is its a great spot to farm Fusion Cells, which are the ammo for the laser weapons you can find. 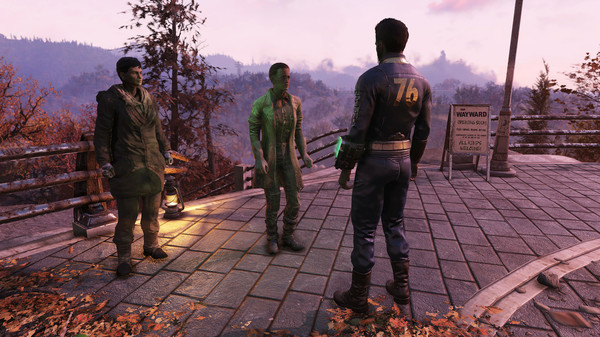 I lucked up and found an automatic laser rifle early on, so this was an immense help until the weapon broke, and I found a legendary laser pistol afterward, so all was good. As far as I could tell, all the events were multistaged like this and gave random rewards. Now, as far as I can say to things, the base building and the graphics are the same as they used in Fallout 4. Which was reasonably well received by players of the series from what I recall of it from launch. The thing that grabbed me the most about and made me squeal inside with joy when it happened was the eruption of a headshot, it is the simple things that bring joy, ain’t it? 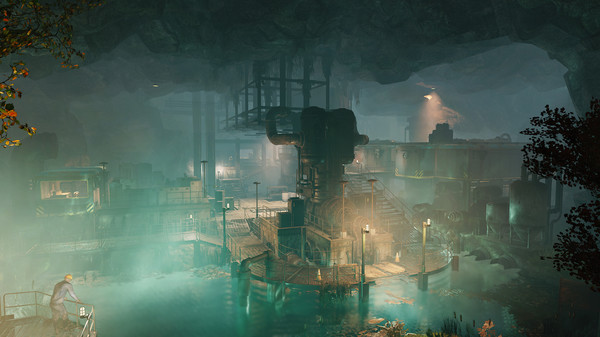 I don’t know why I enjoyed the heads of the opposition exploding when I got an excellent headshot to kill on them, but I did. For that, I am very thankful to Bethesda for the way they handled the way the graphics engine processes it. Anyway, I got a bit off-topic there. I particularly loved how the environments came together to form the world of Fallout 76. It indeed seemed like a post-apocalyptic world where mutants and other creatures roamed. I think I might have nightmares about those giant ants, though. I ran across no graphical glitches at all during my playtime for the review other then me getting stuck on the outside of some stairs. 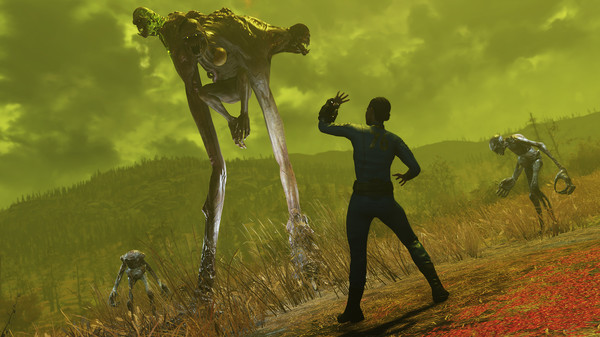 To me, that’s surprising for a Bethesda game, looking at you, Skyrim. Then again, sometimes that’s part of the charm of games from Bethesda. People have come to expect things like that from them at any
game launch. Moving onto the base building personally, I kept mine simple by just placing crafting stations around and not building any walls or floors. However, some of the ones I ran across from other players just blew my mind in the detail people went into with their builds. This one two-story place, I ran across below my mind in particular. I honestly thought it was a non-player character building when I found it. It honestly looked that good. 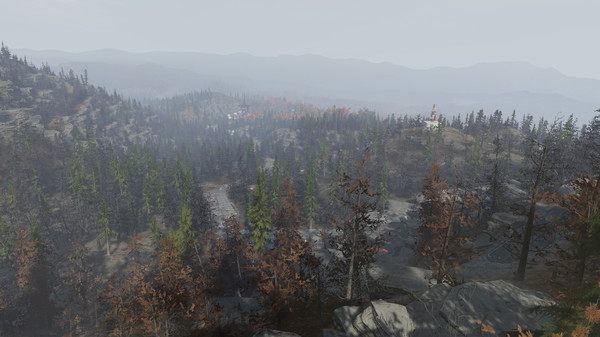 The only reason I found out it was not was the next time I went by it, it was not there at all. I just really was floored by how well it fit into the world. Moving onto to audio, I had no issues with that as well. Everything blended well into the world. The voice acting for the non-player characters was spot on and matched the way they looked for the most part. The sounds from the guns and weapons were not delayed at all. Even the sounds from the enemies were excellent. 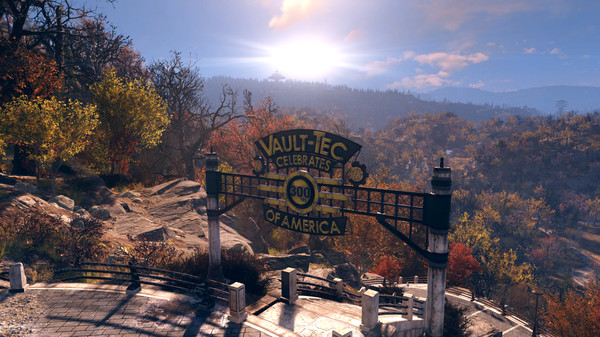 All in all, I can safely say that the game is worth the price tag it comes with it. Even though some the player base is very vocal about things they don’t like, but that’s with any game, and sometimes the loudest are not necessarily the majority of the base. Which honestly does ruin some games for a lot of people. Here is hoping Bethesda keeps doing the best they can with their games.