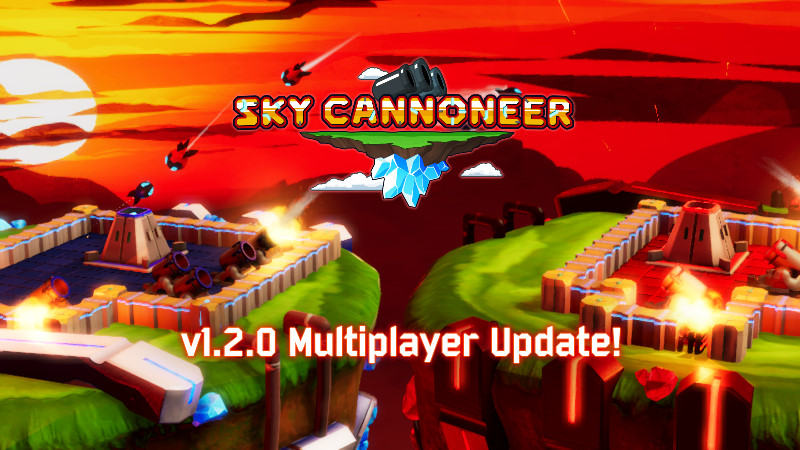 May 19th, 2020 — Element Games is thrilled to announce the arrival of PvP Multiplayer for Sky Cannoneer as part of a new update out now on Steam and GOG.

Become a skilled Corsair in the Sky Lord’s Navy as you unravel the truth behind the plague that ravaged your planet Emoria. Improve your Battle Haven with upgrades, new types of forts and augmentations, then choose which technologies, superpowers, and summons you want to use against the enemy forces.

Each round starts by building up your power grid with randomized walls. You then place cannons on your power grid to increase your offensive capabilities. Use your cannons and special powers to defeat your opponent! Over the course of the game, you improve your flexibility and power to deal with ever-increasing challenges and threats. There are millions of possible combinations for your Haven’s load-out, and the upgrade system creates cool and surprising twists on the original game’s formula.

Weapons and Powers include:
Sky Cannoneer is currently available on Windows PC for $14.99.
To learn more, visit: https://elementgamesonline.com/
Twitter: https://twitter.com/ElementGamesDev
Facebook: https://www.facebook.com/elementgamesllc
About Element Games
Element Games was founded by longtime game industry veteran Marcin Szymanski. He has held key roles on various multi-million selling franchises, including Age of Empires, Orcs Must Die, and Halo Wars. At Robot Entertainment, Szymanski led the design of their first mobile title, the beloved tactical battler Hero Academy. At Playful Corp, he gained early experience in the burgeoning field of virtual reality while working on the core team developing Lucky’s Tale. In 2014, he founded Element Games based on a lifelong dream of bringing his distinctive vision to the game industry. Element Games released Evil Robot Traffic Jam in 2015, a critically acclaimed VR tower defense title that was nominated for 2015 Best VR Game in the 12th Annual IMGA.