Boats have played a historical significance in the history of the world, many being noted in the annals of the history of various countries but what happens you take those famous boats, bring to life in the form of young girls with riggings on their backs and throw them into an anime-inspired world? You get Azur Lane Crosswave. Azur Lane Crosswave is an action-themed adventure RPG developed in tangent by Idea Factory, Compile Heart, and Felistella later published Idea Factory International. This spinoff from the mobile game developed by Manjuu and Yongshi takes elements from that game and brings them to life on a big screen; all tied together with a new, original story and familiar gameplay.. 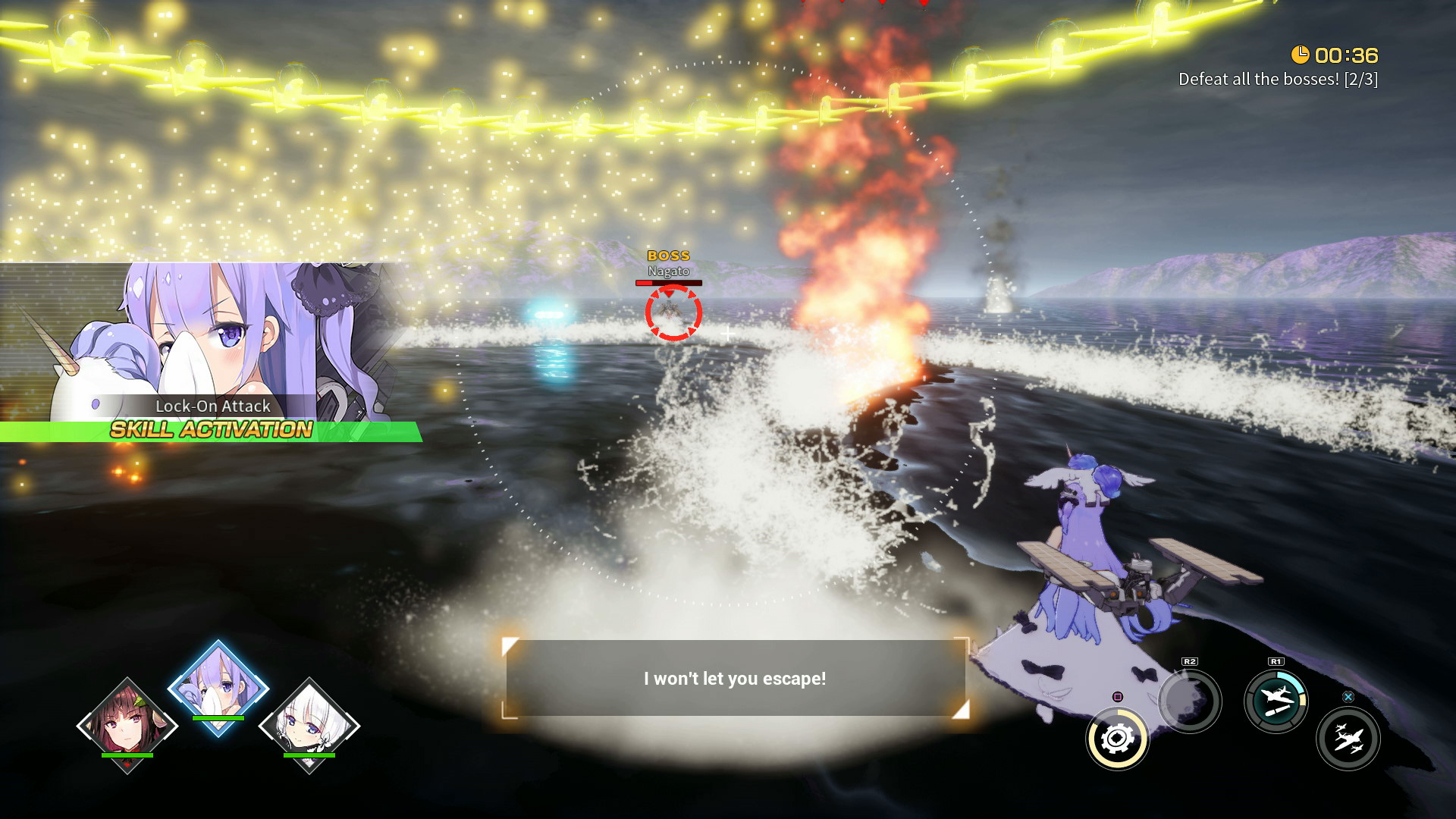 Sailing across the ocean blue, the tale of Azur Lane Crosswave plays out in the form of a meeting of the minds, only spreading to craziness as it goes along in a good, but a sometimes odd way. We, the player, take the view of the Sakura Empire, one of several factions in the world of the game as we follow two new boats, Shimakaze and Suruga, as they participate in naval training exercises when a green floating cube is discovered in their waters. Soon after, a special exercise is called, bringing three additional factions to the home of the Sakura empire to see who has the best ships, in an attempt to collect these mysterious cubes. Don’t trust what you see at face value, though, as what those cubes hold are many secrets for the exercise participants to soon discover.

In terms of story, Azur Lane Crosswave follows a plot you would see come out of its mobile cousin, but here, it is just condensed into a smaller package that ultimately is too short at face value. The base core story, from the prologue to the end of the final chapter, can run a player about six to eight hours, ten if you need to grind to be able to handle the last few fights of the final chapter. This is not to say the story isn’t worth the ten-hour investment, as I enjoy the story being told, I just wish it was longer or expanded more into the universe of certain characters.

Guns fully cleaned and ready for combat, the gameplay of Azur Lane Crosswave is split into four modes, with two of those modes utilizing the game’s combat mechanics. Please note that three of the game’s four modes are locked behind the completion of the sixth story chapter, so if the player is only in it for the story mode, you won’t see a lot of the remaining content. To start, let us talk about the photos mode, which essentially boils down to a mode where the player can take up to three characters they have purchased from the dock, put them in any background you can experience in the combat of the game and recreate critical moments or new ones, then save them to your pc or ps4 hard drive as pictures. 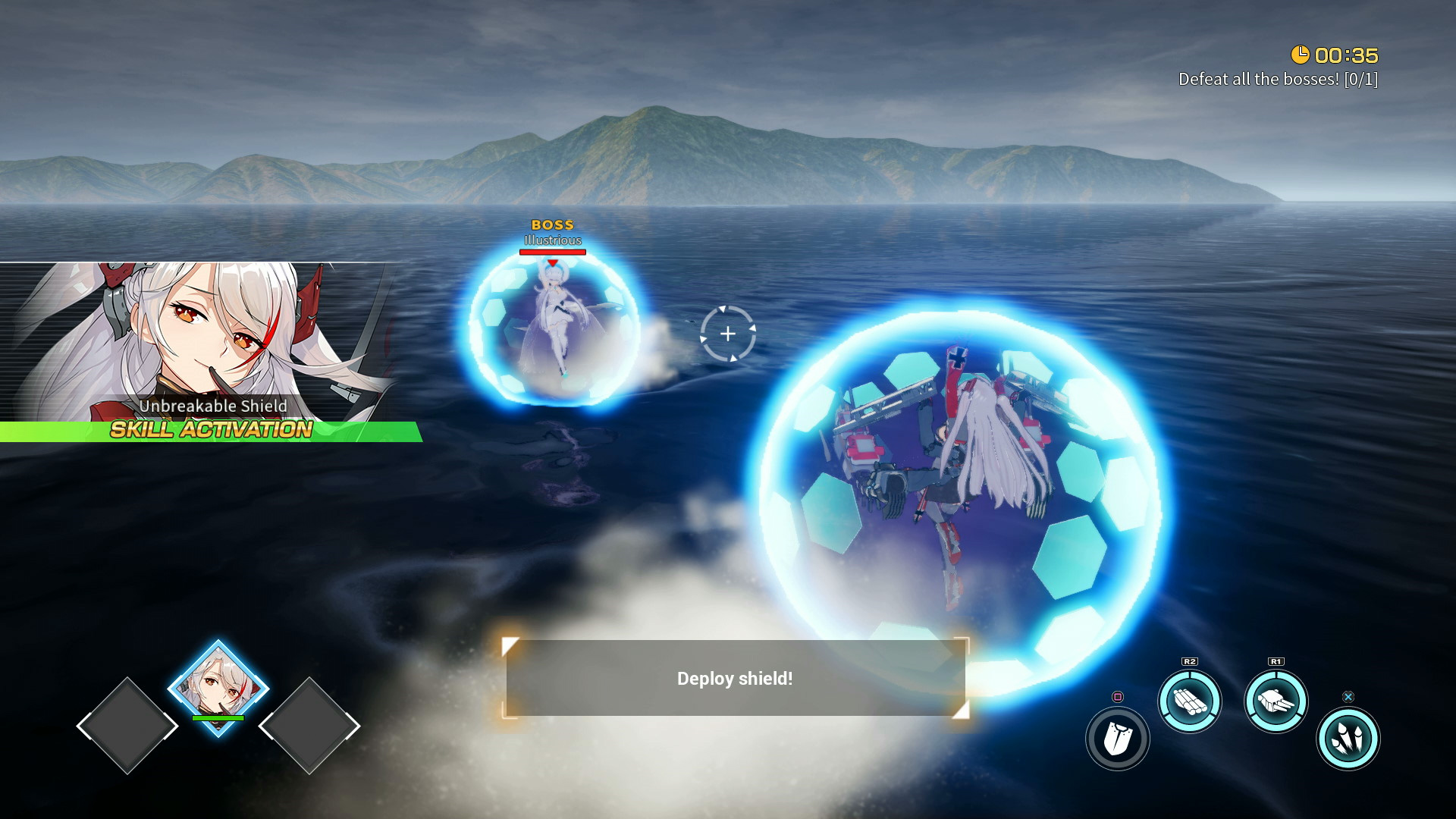 Following this is the episode mode, where players who have purchased the correct characters from the dock with A points can watch short scenes containing those characters, most of which are small events that happen in between the main story. The dock becomes a key portion of Azur Lane Crosswave, simply due to the player not being able to use the same character as an enemy character in a battle mission, and these characters are used to unlock a fair number of gallery events. 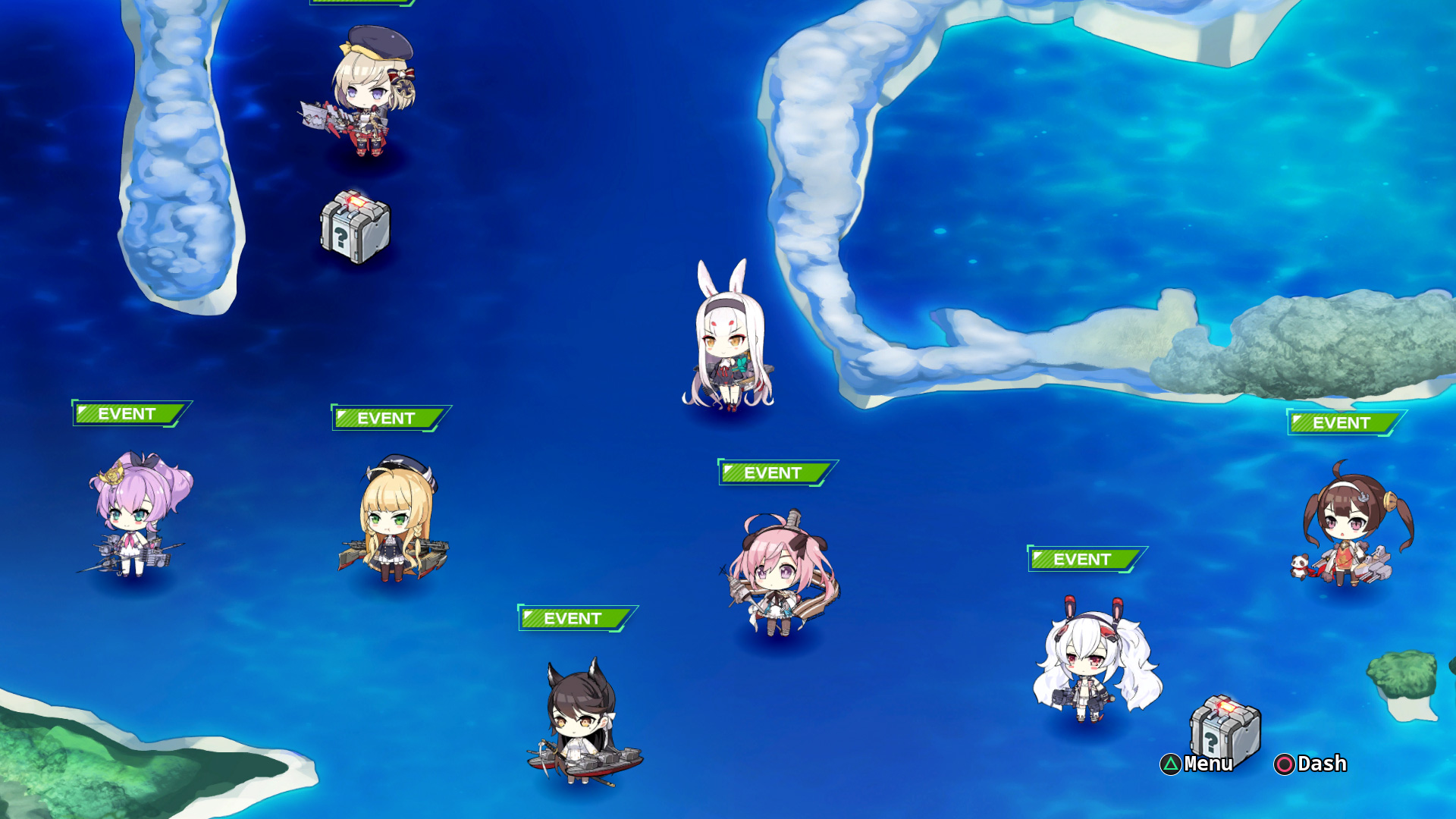 Finally, there is the extreme battle mode, a freer battle mode where players will fight against preset teams of characters to progress farther in and unlock harder challenges as they go along. This and story mode battle missions are the only places where combat takes place, making mastery of the combat systems key. Players move around the ship active on the screen, shooting a primary, as well as a secondary weapon that has its type predefined by one of five ship types. The player is also given access to a dash move and two special moves, one which is generally a power-up and other, a skill tied to that ship exclusively. 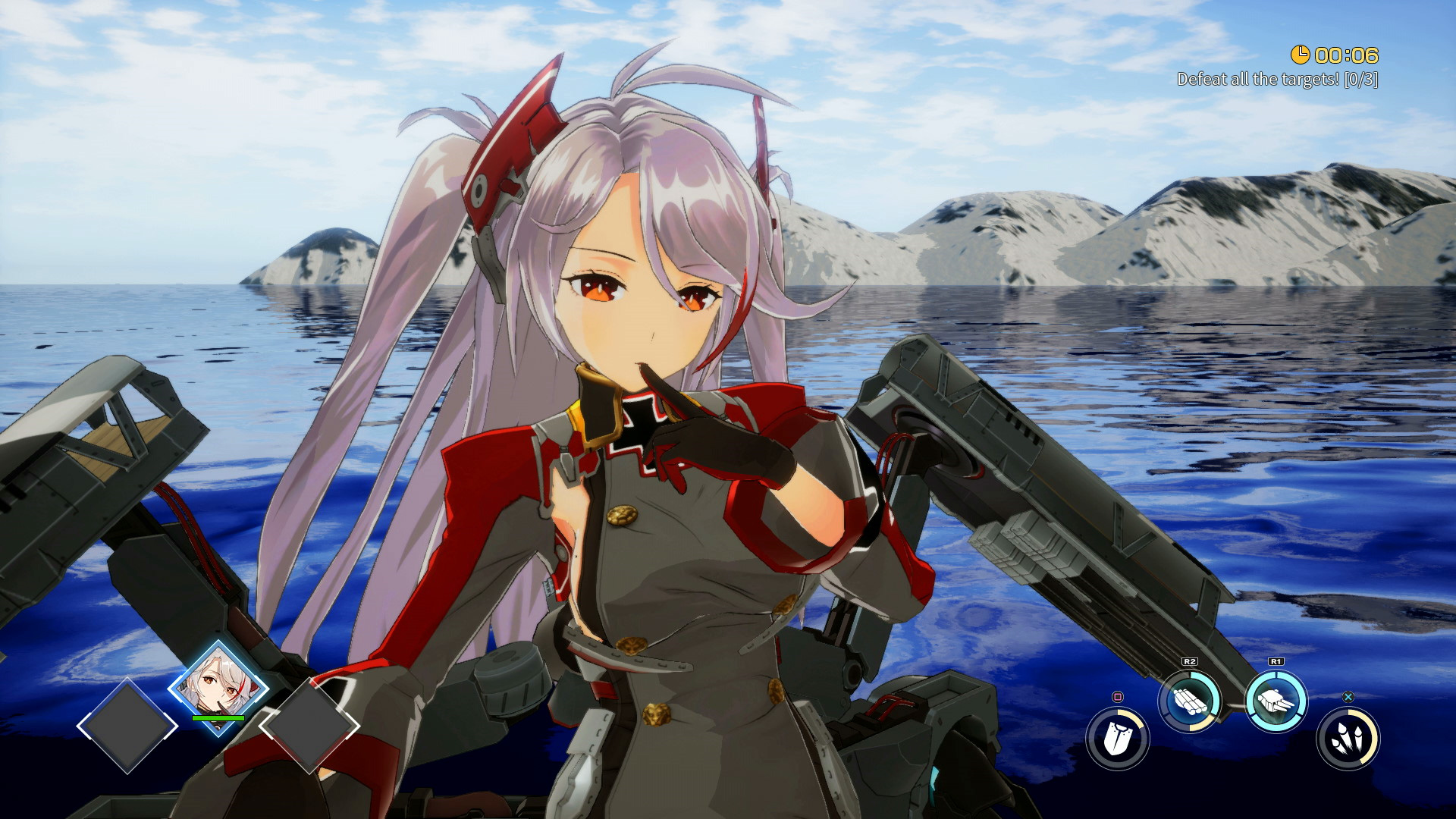 While I found the gameplay of Azur Lane Crosswave to be easy to get used to but hard to master on a technical level, the gameplay is not perfect and has one or two big issues that came up during my gameplay time. The first issue was some bad AI, that while not always a problem, lead to me having to redo several missions where it would just stand still and block my character from moving to escape a damaging shot. This only happened a handful of times during my playthrough, but when it did, it quickly became more of a pain than anything. The second and more prevalent issue was FPS drops that would happen if the player’s character was near some explosions or barrage attack when it landed at the water. This FPS drop happened all the time during my battles, to the point I ended up having to start watching for barrages and moving early to avoid it. At this point in time, I am unable to determine if these FPS drops are tied to the game itself or if it has something to do with the console’s hardware.

Following in the footsteps of the anime of namesake, Azur Lane Crosswave runs with the anime-themed aesthetic all the way, jumping from 2d to 3d back and forth depending on where you are in the game. Visually, I felt Azur Lane Crosswave did make good use of various battlefields shown in the anime, as well as some from the mobile game brought to life on a 3d scale. The backgrounds themselves are always outside the player’s ability to visit, as each mission as an edge guard, but they add to the scene of each battle all the same, with a detailed green island to icebergs. The character models are where you will see the most jump between 2d and 3d, with the main screen and dock sticking to 2d art used mostly in the mobile game and newer 3d models made exclusively for Azur Lane Crosswave as far as I can tell. 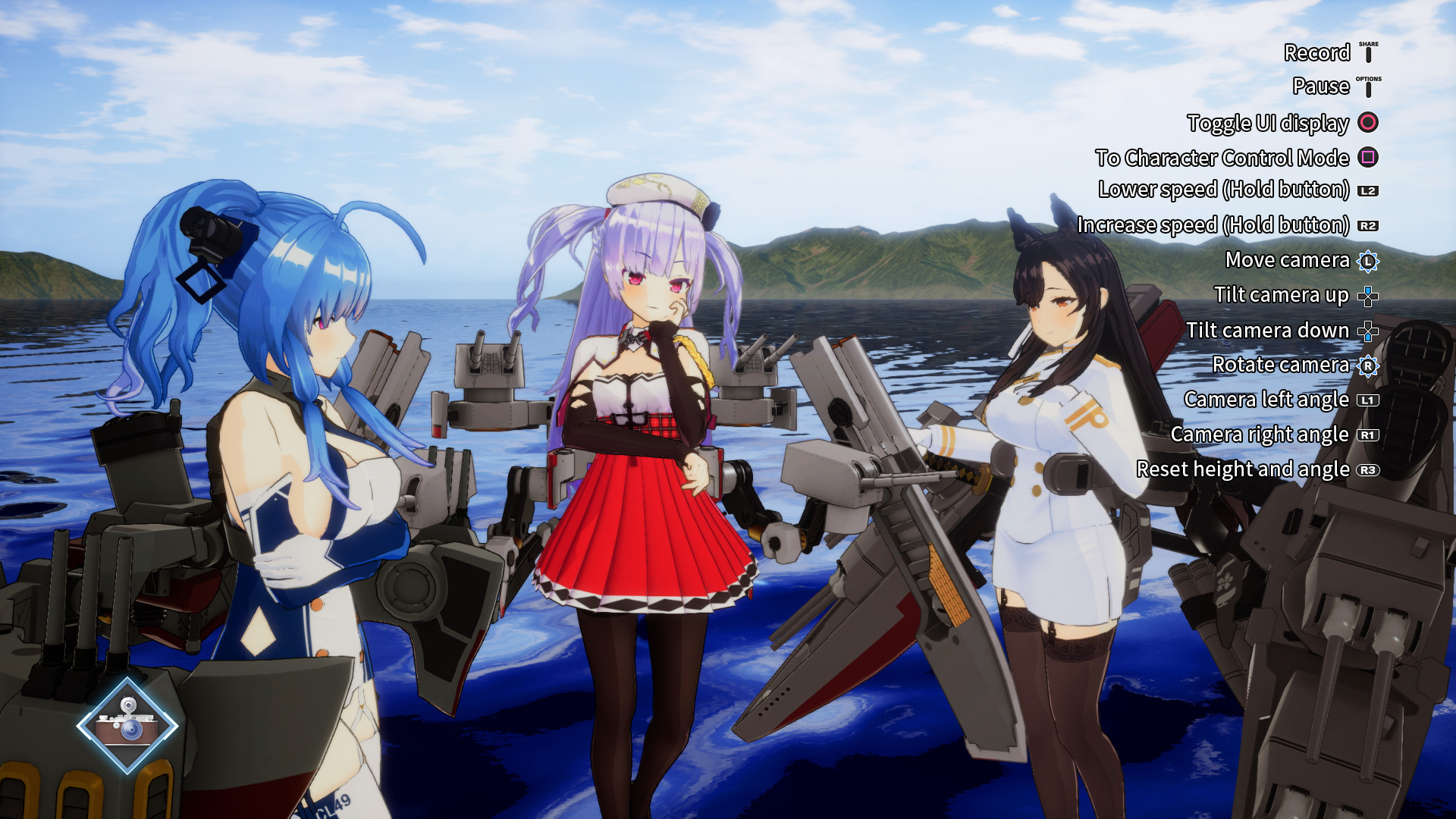 Not sticking to any theme, in particular, Azur Lane Crosswave as a soundtrack, is one of many vibes and genres, which makes sense with how many types of ships and nations the characters represent. Musically, I found Azur Lane Crosswave to be one of the more open games, in terms of its soundtrack and overall sounds. Because of how many genres the game uses for its soundtrack, its hard to lock down just one handful on instruments the team used to make these sounds, with some coming from the mobile game. The sound effects can be the only concern, as while the effects were not overpowering, they did have a few times you could lose the song behind it. 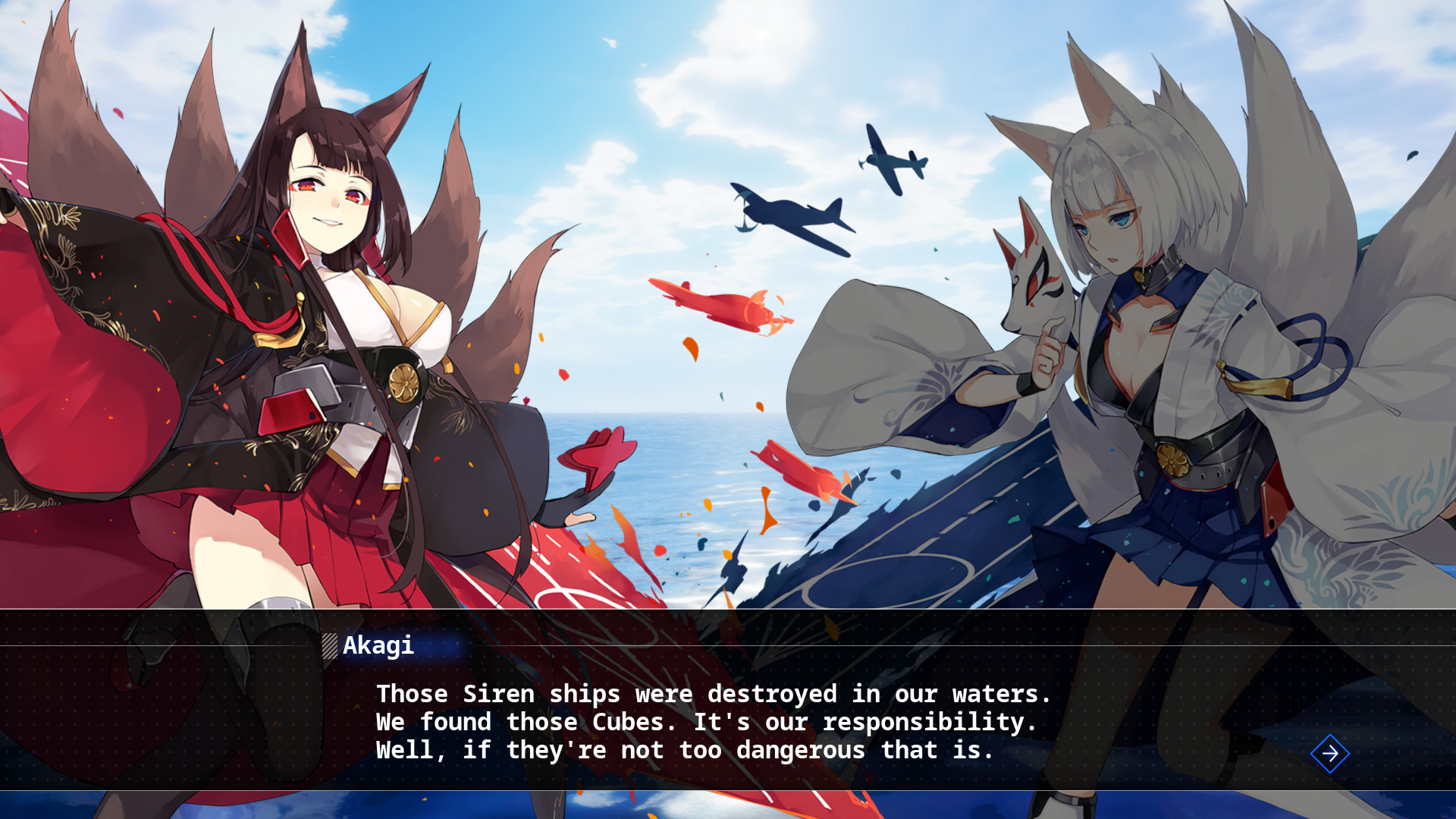 Overall, I find Azur Lane Crosswave to be a great experience as a whole, with its easy to pick up gameplay, charming cast of characters, and while short, creative side story in the Azur Lane universe, though it does fall behind in some places like the story gameplay time. The creative story, charming yet interesting cast of characters, easy to grasp gameplay, amount of end game content, and the sheer amount of genres in the soundtrack make for a boat trip I can easily recommend to fans of the series and to some on the fence.

DarkLunarDude gives Azur Lane Crosswave a Drastik Measure of 8.5 out of 10.0 (85)

At the price of $49.99 on the Playstation Network, I can easily recommend Azur Lane Crosswave, but this does come with a stipulation. For fans of the Azur Lane series, this is an easy pickup, as well as for those looking for relatively quick platinum for their Playstation Network accounts, coming in between twenty to twenty-five hours with the right setup. However, if you are looking at just the core story mode experience, you may want to hold off for a sale, as the six to eight-hour story mode does not give the value for a $49.99 game.