So here’s something funny. Back in 2017, when Monsteria was first released, I played it around launch and initially recommended it on the basis that it was cheap ($3 at the time). Fast forward to 2019, and it appears the price has since been hiked up to $8 in December 2017, with absolutely no reason given for this sudden hike. Unfortunately, this necessitates I have to re-evaluate the game at its current price point and see whether it still holds up.

But let’s start at the beginning, shall we? 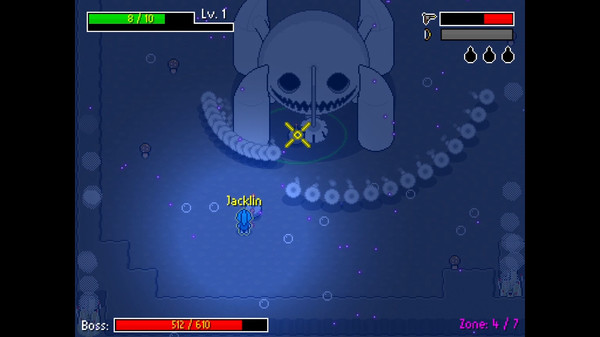 Monsteria represents yet another entry in the fairly popular top-down twin-stick roguelike/lite genre, this one being developed by Sharkbird. Sadly, info on the developer is incredibly sparse, other than that his biography on his site lists himself as a computer science graduate from the University of Waterloo. Ostensibly, he has previously released Android games, but this is unable to be verified; Monsteria would represent his first Steam release. 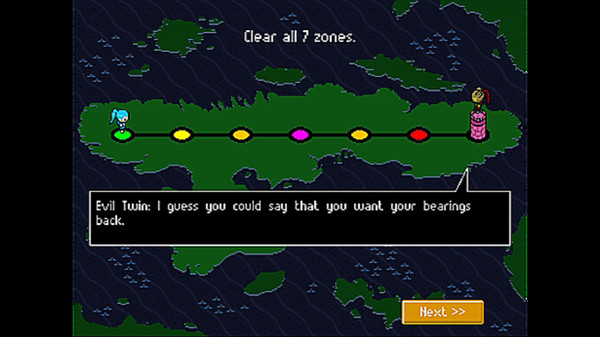 When I played it years ago, it had a distinctly low-budget look and feel, this hasn’t changed. The sprites used are passable, the menu is functional but not overly filled with any sort of flair, and the menu music just…well…uses repeated notes of the same pitch in different octaves in a relatively tasteful manner? It’s definitely not the kind of award-winning (or award-pending) music, in all honesty. This low-budget feel further extends to the game resolution itself, which is in rather awkward dimensions, and not the typical 16:9 screen ratio.

The game used to have only 7 levels total (3 levels, 1 miniboss level, 2 levels, 1 final boss level), but at some point, this was arbitrarily increased to 11 levels total, with extra normal levels while keeping the midpoint miniboss level and the final boss level consistent. The premise is juvenile and nonsensical — your evil twin stole your teddy bear’s head, so you have to journey and kill a whole host of ridiculous monsters with no theme to it, progress all the way to the end, and kill your evil twin. The weapons are rudimentary: you get a stock gun and a bow that you can charge up before you release penetrating arrows. You also have a few bombs, and all of these will naturally reload over time. 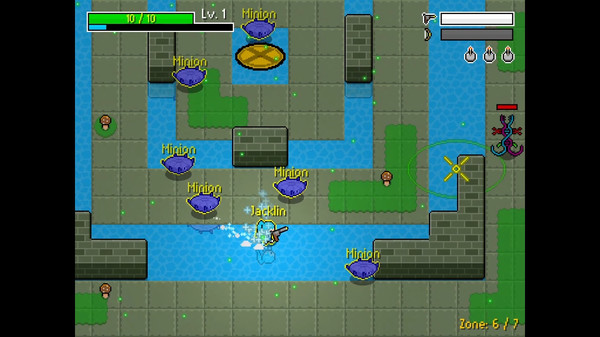 The game has a modicum of challenge, with enemies being somewhat tricky to kite. In spite of this, though, runs can be rather short, as levels on average feel like they take about a minute each. At the end of your run, you are then given an arbitrary star rating. I’m not entirely sure how this is graded, but it seems like this is based on your final health, the total amount of experience granted, and maybe weapon accuracy. There are rather specific run goals and win totals that need to be attained in order to unlock up to 5 characters total, each with their own special mechanic. A text box to enter a random seed also exists, but the runs themselves feel way too similar to each other, to begin with.

Monsteria’s unique point over other twin-stick games though, is the upgrade system: with 2 free rerolls per run, you get to either pick a character improvement or a minion to enslave and fight alongside you. Granted, the character improvements do actually feel pretty fun, especially if you can get gun bullets with rather minor homing capabilities that can burn and stun enemies all at once. Beyond that, though, there’s nothing else that makes Monsteria stand out from the crowd. The controls are rather fluid, but when the upgrade system is taken out of the equation, Monsteria just feels…rather ordinary. 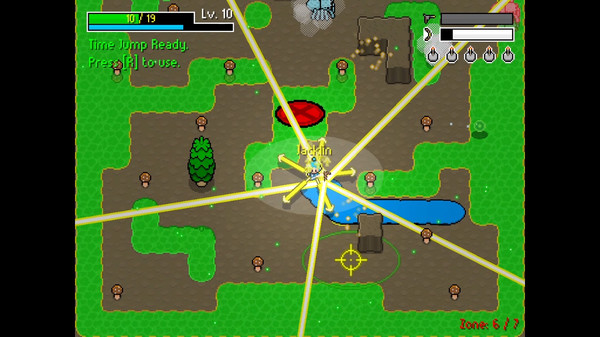 Let me return to the whole ‘price increase’ snafu for a moment. As I said, I played the game near launch, with only 7 levels per run. Later on, the price increased by $5 — with absolutely no semblance of an explanation — but all I got was merely 4 extra levels per run. This is not only a) shady, but also b) not quite a lot of bang for your buck.

Usually, I’m not particularly eager to detract from reviewing the game content, but here’s some advice to developers: be transparent with your customers. If you need to change the price of your game, an explanation will work far more wonders compared to radio silence. For that reason, I’d only recommend this game if it goes on sale in Steam. Not only for lack of price change reasoning but also because since this game’s release, there are far better top-down twin-stick roguelikes/lites that have released that you can while away your time with; Monsteria is just painfully average.