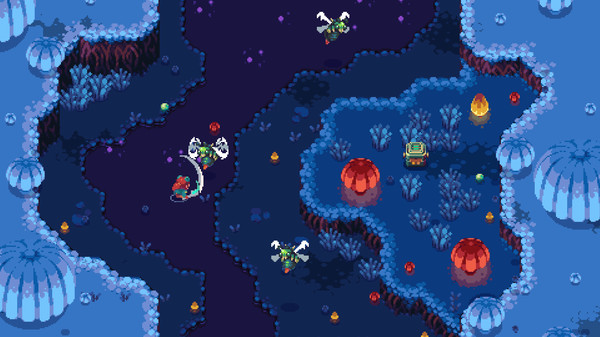 What happens when you take a pair of twins, add a few other collaborators, and get them to make a game? You get Sparklite! …well, not really.

Sparklite’s development studio Red Blue Games is comprised mainly of the aforementioned pair of twins. The team has previously released a series of mobile games; Sparklite is their first title for PCs and consoles. 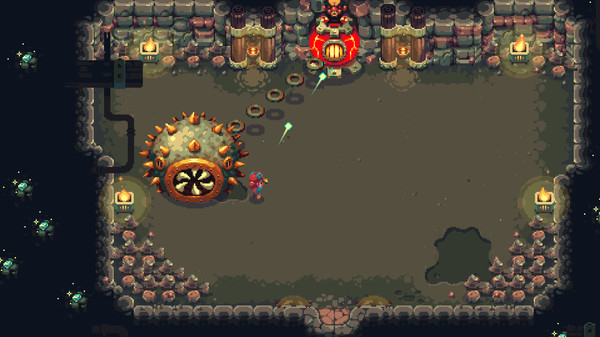 You control Ada, a mechanic with a wrench and a hammer (which curiously enough reminds me of Iconoclasts). As you explore the lands of Geodia, collecting the titular Sparklite ore in “ore”-der (sorry, couldn’t resist) to upgrade various structures on a floating island, invest into character improvements, and others, all to take down the Baron and a bunch of bosses, henceforth referred to as ‘Titans’. Now, I’ll be perfectly honest; the story isn’t that memorable to me. Beyond the whole trope of ‘chosen one has to save the world and she has the artifact to do it’, I’ll freely admit that the story and lore elements did not particularly captivate me. I had to look at the store page just to even be able to get the story mentioned above out. 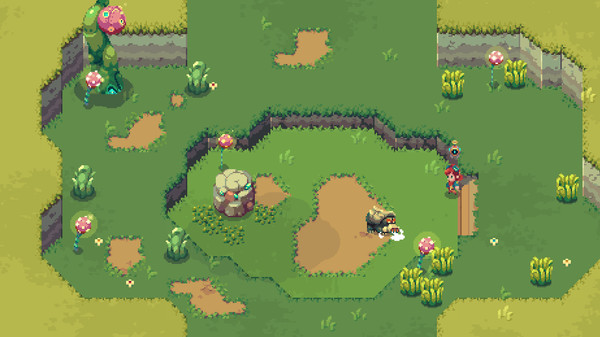 The tutorial doesn’t quite start on a good footing, either. There is an absolute lack of key prompts given when you have to do a specific action, meaning you’d have to figure it out by trial-and-error. At least, that was the case when I used the mouse and keyboard since my strict personal preference is to play top-down twin-stick games with such a control scheme. The options menu is also rather sparse, and the keybindings are not remappable. The tutorial eventually culminates in a teaser battle with the first Titan — tip, while you can learn his attack patterns now, you’re railroaded into not winning the encounter. 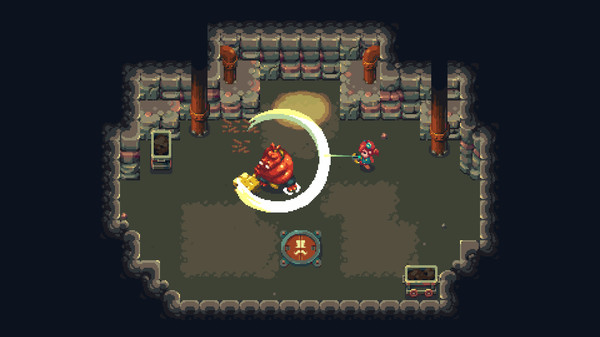 Once the tutorial ends, you get rescued and taken to a floating world, where you can spend your Sparklite in between runs. The roguelite elements come into play here; you can apply a series of patches to a square patchboard installed on your wrench that improves your character in various ways. These improvements range from health upgrades to damage upgrades and even upgrades that help you traverse Geodia better. 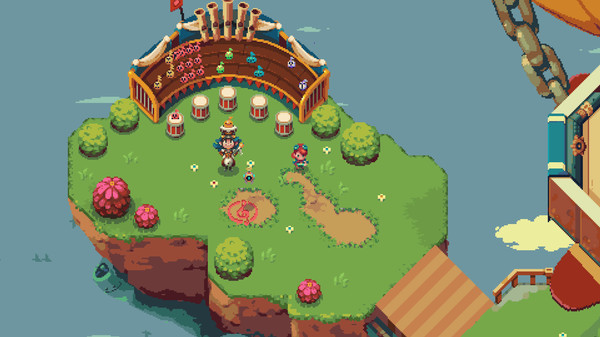 Sparklite is also used to upgrade various structures on the floating island. A Workshop, where you can ‘invent’ a series of useful tools with Sparklite, after having discovered their schematics in the lands below. A widget shop where you can pick up a free widget before a run. And later on, a Bestiary which allows you to deal more damage to a particular enemy that you’ve encountered before. Upgrading the medical bay will also allow you to fuse patches together to make them more effective (as well as having them take up less space on your patchboard). At the higher levels, the medical bay also increases the dimensions of the patchboard, allowing you to apply more patches. 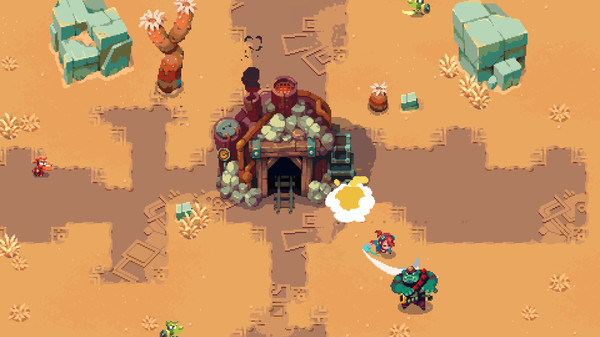 As it turns out, the upgrade system forms the bulk of the roguelite aspects of Sparklite. The world’s procedural generation? Not so much. Upon each incapacitation, the world is randomised. Sure (this is neatly explained in the lore as ‘Fractures’ where the world shifts and rearranges itself), but this randomization is rather ‘lite’. The individual map layouts grow quickly familiar and repetitive after maybe a few playthroughs. Then again, I’d think that the whole randomization aspect of Sparklite isn’t its main draw, but the gameplay rather. 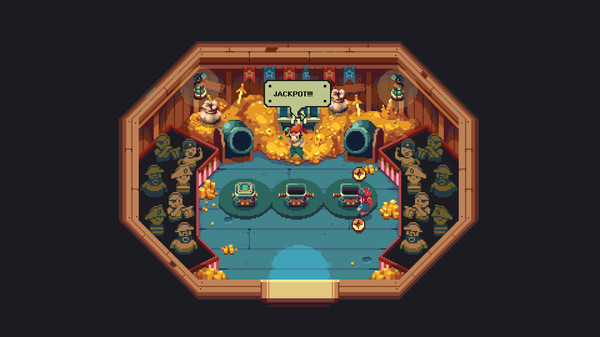 While speaking of gameplay, Sparklite is amongst the easier top-down twin-sticks I’ve played. There’s a limited number of enemies in each zone, which makes it easy to internalize their attack patterns and the number of hits required to kill each of them. Combat is almost completely melee-based, where you clobber them into submission with the aforementioned trusty wrench (and occasionally hammer, but it’s not something I typically do). A few gadgets that you will, later on, discover and invent will allow for a rather limited semblance of ranged combat. Still, as these gadgets run on an energy meter, this is rarely feasible over the typical melee combat, with the gadget use restricted to more easily traversing specific obstacles. Titan attack patterns are also rather simplistic, not too much to take into account. In fact, in a prolonged gaming spree, I managed to take down Titans 2 to 4 in the span of two hours and 15 minutes on my first playthrough, with Titans 3 and 4 being defeated in a single try. (The final boss would take two tries to beat, where I got rather close to beating him on the first, but could not survive; the second attempt was rendered trivial after I used the Sparklite amassed on that run to fuse patches together.) 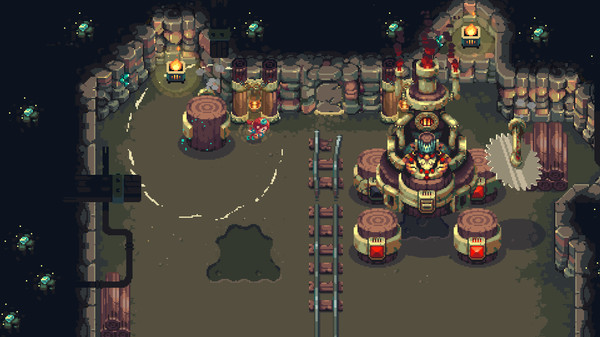 The game’s simplicity is such that it is possible (relatively speaking) to defeat some of the later Titans without getting incapacitated by running out of health (or ending a run via the pause menu) just to go back and upgrade/install more patches. For some reason (which I will get into later) I started a second save file after having beaten the game, and I progressed a LOT faster, getting incapacitated way less than on my first playthrough. It’s nowhere near as difficult as the hardcore twin-stick stalwarts The Binding of Isaac, Enter the Gungeon, or Nuclear Throne in that regard; it’s more a story-driven adventure game which is forgivingly designed so you will eventually see the ending. 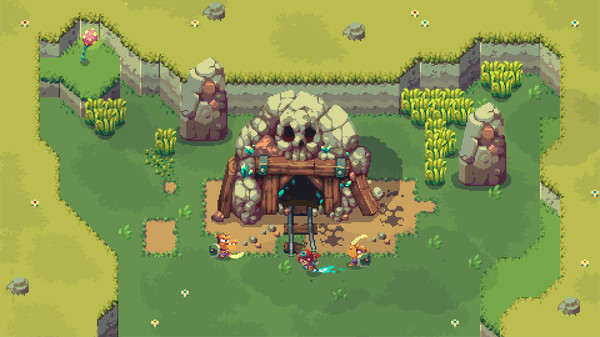 And boy, oh boy, does it build its world well. The pixel art is cute and eye-catching, the soundtrack gives off a typically soothing and melancholic vibe, and the sound effects have some ‘oomph’ to it. Weirdly enough, the game audio is built for stereo sound systems; there is no real need for this in a twin-stick shooter. On the bright side, however, it did help me realize that my right speaker was wonky, at the very least. The controls feel very tight and smooth enough; any incapacitations are always my fault, not the controls. 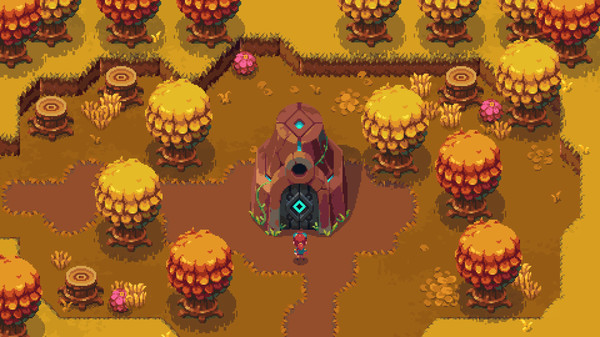 The world of Geodia is not as gloomy as the soundtrack might suggest, however. Some fun events can be encountered. One of them is not only a real application of the famous Monty Hall problem, but it’s also blatantly named as such. Not only is it a nice method to attempt to win some additional Sparklite (decent chances of winning with the optimal strategy, and not too large a penalty on losing), it’s a rather cute application of a real-world problem. The other key event is a…grindy collect-a-thon. Little birds called Beats are hiding throughout the world, and after a few upgrades to your robotic sidekick (which you’ll rescue upon beating the first Titan, and this also simultaneously enables assistive co-op mode), you’ll be able to explore the world hunting for them more freely. Assistive co-op does feel like an afterthought, however. With your robotic sidekick’s abilities being fairly limited, all the co-op mode is good for doing is just minor time saving here and there. You don’t really spend that much more time switching to him to do his actions and then switching control back to Ada. 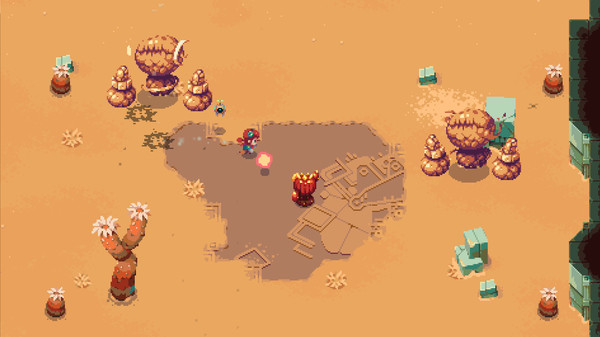 At the time of review, Sparklite wasn’t technically perfect or bug-free. Granted, I didn’t run into much, but around launch, more issues were reported by various players. Sadly, I had to start a new save file because one of the Beats was glitched, rendering me unable to collect it. When this review is published, this may be fixed, but that depends. 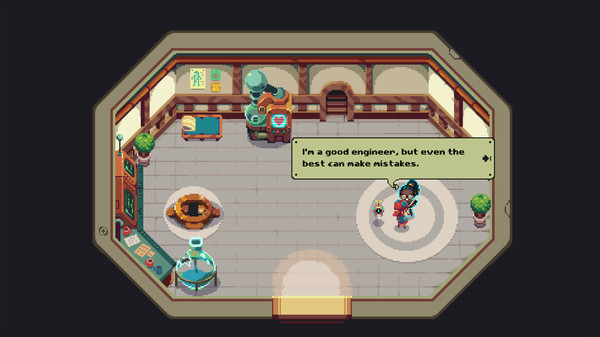 I realize I have not touched on widgets yet, so let’s go back to that for a moment. Think of them as consumable items that you can use. Besides the one widget you can obtain before a run, you can occasionally find them in small chests or in what is best described as the mutated fruit of some trees. Here’s their issue, though — they mostly feel unnecessary. Granted, a few of them may be useful in the earlier stages of the game (think energy recovery and health recovery, the latter of which is probably the most useful). Still, the usage time required to use one coupled with the nature of some of the widgets (timed mines, a widget that drops projectiles around Ada, etc.) means that I seldom use most of them at all. 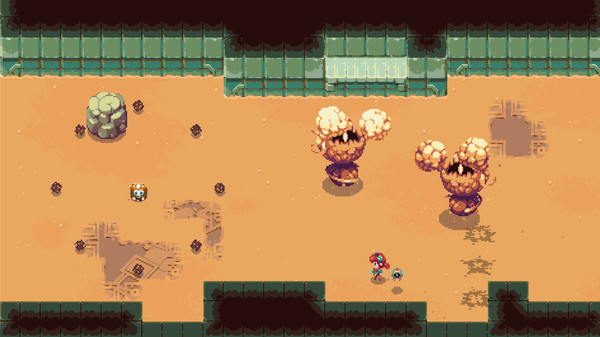 I know I’ve been trying to avoid correlating price with time spent, but I have to beat a dead horse for this one. Sparklite, all in all, took me only 10-ish hours to beat the main story. The achievements I have left are all grindy and will pad out this time somewhat as I try to get them all, but even still, this is a rather pricey prospect for a game that’s much shorter and easier than I thought it would be. Any of the hardcore twin-stick roguelikes mentioned above offer a lot more varied and challenging gameplay for cheaper.

My recommendation would be to wait for a small sale. Sparklite is fun and worth trying out, but at $24.99 on Steam, and for the amount of time it took to beat it, I would strongly suggest getting it on discount, as well as waiting to make sure that all the bugs are fixed.