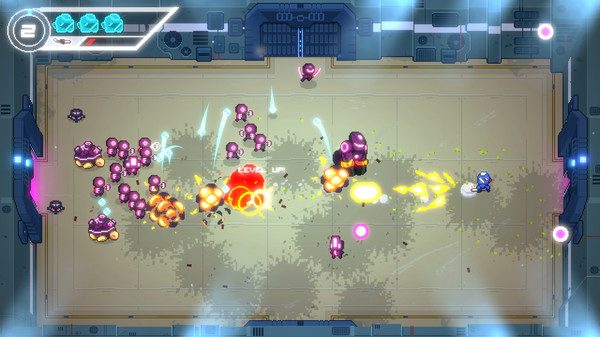 Galaxy Champions TV is a very fast-paced, twin-stick, bullet hell styled game set in 2049 where interplanetary colonization was successful. Every planet in this solar system is filled with life but ruled by a dictatorship. The only entertainment people are allowed to watch is one very violent TV Show made famous by the sheer level of brutality. You are tasked with getting through all four stages and winning this show for fame and riches. 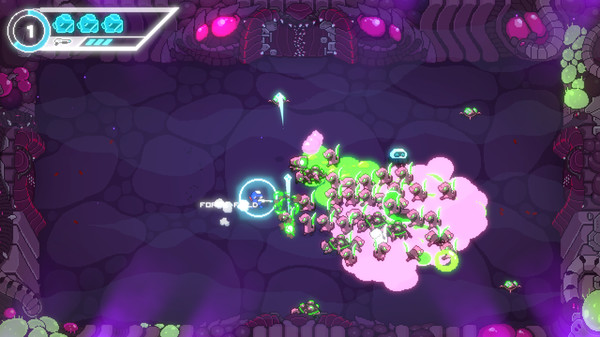 The story is small and basic. Still, for this type of game, you don’t need a huge fleshed out narrative, go in, shoot the guys, get out. Simple but having that reasoning is still there for those that want to read it, but be quick the text is only there when you start up the game, and there’s no easy way of reading it without taking screenshots. The “story mode” is a collection of four planets, and each planet has nine waves of gradually more difficult enemies then finally a boss battle at the end. You have to collect weapons that are dropped to get through each wave and collect experience orbs to let you level up abilities and weapons. There are five weapon drops, each with their own rate of fire and not including the default pistol. The shotgun is slow but has a wide radius of fire. The flame thrower isn’t the most powerful but damages a large number of enemies over time. The mini-gun with its fast rate of fire but a small area of effect. The grenade launcher, which is great for crowd control. Lastly, the laser which takes a second to charge up but wipes the board in seconds. The game is very much a trial by fire type of game. You WILL die multiple times because you kind of have to, to be able to get the upgrades and experience needed to progress later stages and planets. Each board has an onslaught of enemies spawn from four areas, and they spawn with numbers. You can quickly become overwhelmed and hurt or even killed if you aren’t quick enough to dodge and attack and saying that at times you can even lose track of your character in the mass of bullets and enemies. 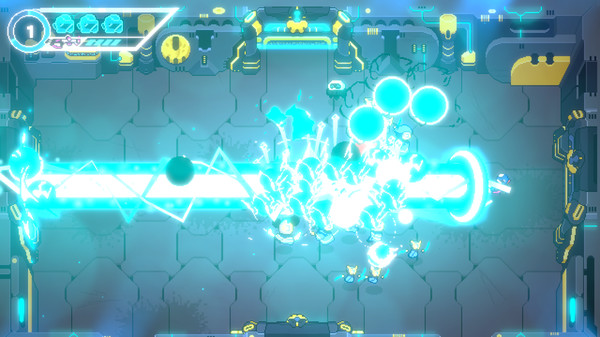 As you start up the game, you are greeted to a very retro arcade-styled start screen, which even says “insert coin,” which makes me want to see an arcade cabinet of this game! The whole aesthetic of this game is modern retro, which I fell in love with quickly; even the menus feel like a retro game without the jank. As you get into the actual game, the sprites are very clear, and the background of each planet looks fantastic, even the small details of shells hitting the ground is a nice touch. There are a couple of small nitpicks I have, even for a bullet hell it gets very cluttered at times and half the time I’m guessing where my character is or where it’s going through the mass of enemies bullets and screen effects. Speaking of which, the screen shake, when there are explosions and hits, makes it even harder to concentrate, however, there is an option to lower and even turn off the shake which I’m thankful for, but even with these minor things, it’s brilliantly done! 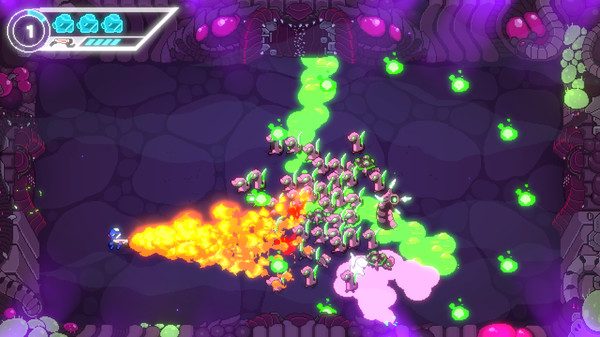 So let’s move onto the audio, the soundtrack is really good if lacking in variety, there are only two or three different music tracks, and after a while, of playing, I just put my own music on. Don’t get me wrong they are good tracks, the first couple of times you listen to them but, it gets boring. But as they are, they do a good job of keeping up the pace, and they do fit the game well I just wish there was a bit more. But as for the guns, yeah, they’re clear, and you can tell what you picked up just by the sound alone, which is nice when you’re overwhelmed. 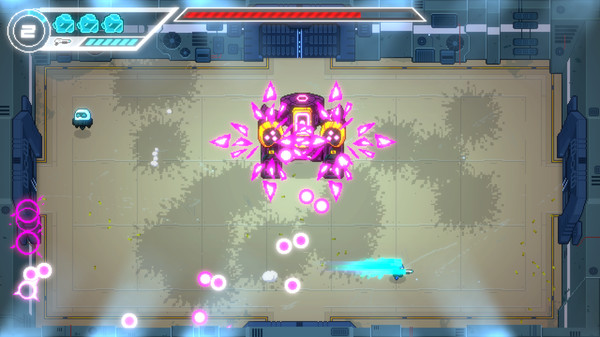 This game has a couple more things to it; there is a multiplayer aspect that I can’t say a whole lot on, but I do know it’s local only. You’re playing side by side for the same goal, but there’s another mode called “champion’s mode” which is an endless onslaught of enemies and see how long you survive, the aim is just to survive as long as possible and get the highest score possible where that score goes onto a worldwide leader-board, there is however a problem of sorts, the upgrades you get in the story is what you have in the Champion’s mode so if someone comes along and only wants to play that and have none of the upgrades from the story mode they’re at a major disadvantage, as minor as this seems it’s still something I felt I needed to bring up if you have a scoreboard and endless wave game you should really have that mode as a level playing field in my opinion. 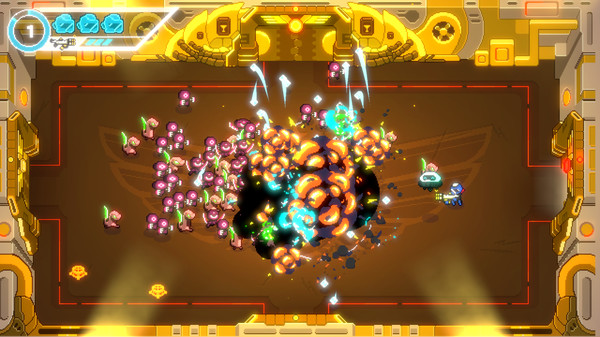 All-round though is a really fun game, if a bit difficult, there are little things here and there that can be improved but a lot of what they did do, they did spectacularly well. It really feels like an old-school arcade game just with newer graphics, and I can really see this in arcades! It’s brutal at times, but that’s part of the fun.

Going into this game, I had my doubts, it’s very easy to mess up these types of games and make it almost impossible to play, however, they nailed this game! There are small things like the lack of music variety that is a shame, but I had an absolute blast playing this, and even after writing this, I’m going to go back and play more! And before I end this review there is one small thing I want to point out I did a little research and saw where it was at this time last year, it was very bland in comparison, but they kept the same feeling, the developers did a brilliant job with this game so far, and I’m looking forward to seeing what’s to come in the future. So lastly, would I recommend this game? YES! It’s $6.99 (£5.49) on Steam and Nintendo switch, but you can also grab it at itch.io and for that kind of price you can’t miss out on this gem!