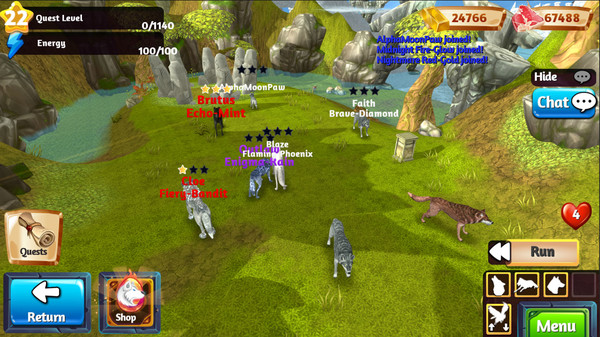 Wolf: The Evolution Story starts you off as a cub joining up with a pack of wolves called the Silverglade Pack, a small family of wolves trying to keep a-hold of the land they call home. You are tasked with bringing numbers and strength back to the pack and unlocking more land to explore and take over. To progress through the game, you must hunt food and fight other animals to level up and then breed more wolves and then from that gain strength. The story of this game is very bland, even for this kind of game. The leader of the pack, Obsidian, has you and his family, AKA the wolves you breed up, go out and hunt the other animals in the area. After a short time, you’re introduced to his shunned brother Chronos, but Obsidian now needs his help. There is also Narcisse, Obsidian’s mate who has had pups and Impisi, Chronos’s mate, who you never see but gets attacked, which makes Chronos want revenge. You have to fight the bears, tigers, and rhino’s to gain their land and show that the Silverglade pack is “Top dog!” 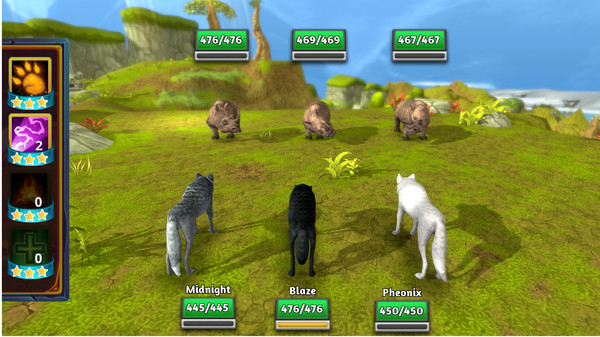 As you start your adventure, you’re quick to realize that you only use your mouse to play this game, the only time you use the keyboard is to talk to other players and exit the game. The next observation is the HUD; it’s elementary, a couple of emotes, experience bar, quest book, feeding, shop, and glossary. Everything is on screen and takes up so much room, which causes issues when trying to click on particular areas of the map. Then there’s the actual hunting and fighting, to hunt you click on a box above individual animals. As you get close, you’re put into a small mini-game; the mini-game consists of a bar where you have to click on the target as a finger slides past. THEN you have to tap targets as they show up as fast as you can. While we’re on the topic of the fighting mechanics, the animations are super limited, using the same animation for different moves and the same sound effect over and over, it definitely grinds on you after a while. On to the fighting, a sort of turn-based combat, rather than turns, you and the enemies are on a timer to get your hit in. More often than not, the enemy gets a hit first unless you can click the attack, then the enemy quick enough. The whole game is just a grind of attack animal A, gather food from animal B, breed, combine repeat till you get the strongest wolves. 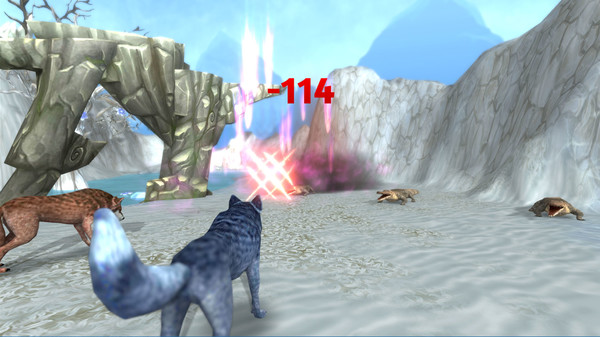 The visuals aren’t too bad for the most part and remind me very much of World of Warcraft or similar design though they lack the polish of such big games. You can clearly see where one area starts and another ends as there is no merging or fade, only a straight line from each texture. There are areas where the grass is hovering a good distance from the ground, and as you travel around, you see animals hovering as they walk until you interact or scare them off. The simple design doesn’t take away from the atmosphere; however, the map itself is so tiny it takes seconds to get from one side to another, so it doesn’t take long to find these kinds of issues. Then there are the cut scenes which are glitchy messes, ears clipping through fur, gems that are part of the wolves designs floating inches from their faces, sound cutting out, limited animations. Even the grass not being cropped right and having square edges, they’re bad and very cheaply done. 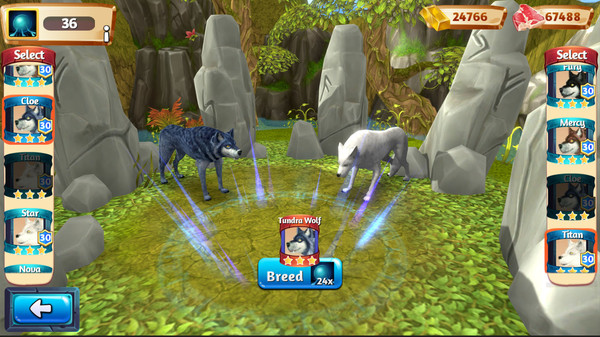 As for the sound design, it’s not good, to say the least, between hearing the same sound effect being used for different animations or fight moves, and the sound cutting out in cutscenes. The music is the same track on repeat over and over as long as you play, so far I haven’t heard a different track after a solid 5 hours of playtime. But the thing that got me is in cutscenes when the wolves attempt to growl; it sounds more like a very broken engine, and that’s if they even play in the first place. There is no voice acting, which honestly is a good thing, everything else seems so cheaply done I think any attempt at voice-overs would be just as bad. 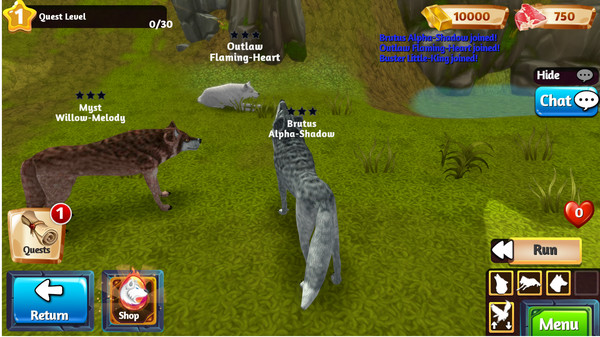 The last part I want to address is the so-called online aspect of this game, its nothing more than a gimmick. Yes, you can see other characters go around, and yes, you can talk in the chat (with a minimal character lock). Still, you only have three emotes to use, which are a howl, lay, and a third, which is a bow of sorts? On the Steam page, it is advertised as having PVP, which there is none at all! You can’t really interact with other players or team up or even trade items; you can only send small text messages which very few players seem to use.

Now, as I started this game, I was completely clueless about the title. Still, instantly, I was thinking, “am I playing a mobile game,” and in fact, I was right in thinking this. A month after the release of this game on Steam, it was released on Android, iOS, and Amazon as an app game, so out of curiosity, I downloaded the FREE game. It was the same game but with added features, an energy bar, more impressive wolf types and models, and an all-around cleaner game with in-game purchases everywhere, for food, gems, loot crates, and VIP membership. On the Steam version I hunted for food as a test and only hunting the starting area rabbits I was getting around 300-500 food, which isn’t bad for the leveling but on the app, I was getting 30-50, and the VIP access gives an x2 multiplier which still isn’t even close to the Steam version. So what it seems like to me is they’re selling the demo version on Steam and just forgot about it to focus on the app because it has so many micro transactions ranging from £1.99 to £54.99. This refocus on the mobile app locks Steam users that pay £11.39 from all the content that’s been made. But even then, the game somehow is cross-platform people on phone and tablet can show off to those on Steam that physically cannot access the other wolves or content.

Piercedrocker gives Wolf: The Evolution Story a Drastik Measure of 2 out of 10(20)

Between the shady tactic of paying for a demo, the cheap animation, and poor sound design, I would suggest keeping away from this game, even the free app version. You might get a little fun out of the grind and may even enjoy talking to some of the other players, but this should not be sold on Steam, you’re paying £11.39 or $14.99 for what might as well be a Demo! Just comparing the Steam version to the mobile app, you can instantly see what has had the most attention put into it. It is a good idea, poorly executed.