This is a Press Release by, Rogue Snail 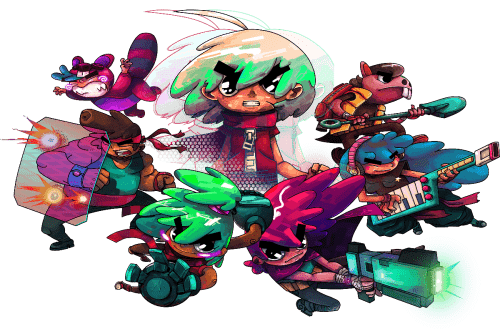 Rogue Snail has announced today that the full party update is now available in character-driven co-op loot shooter Relic Hunters Legend. Alongside the update comes a character spotlight featuring the sassy support character Raff, the Party Engineer. With an arsenal of abilities, Raff now is able to support her teammates through jammin’ tunes and pump out some damage with her trusty Keytar.

As a follow up to Relic Hunters Zero, Relic Hunters Legend features a boisterous cast of characters that are brought to life with comic book style animation and each fulfills a different role. The latest role to be added is the support that is now available with the inclusion of Raff’s full kit of abilities. Raff powers up her teammates with the variety of tunes in her music aura including the adrenaline pumping battle song, and the revitalizing soothing song. Raff is also able to get her teammates the quick escape they need with her up the tempo speed buff. When some serious damage or healing is needed Raff is able to use her Keytar Blast ability which blasts enemies away while also healing her team. When in close-up combat Raff packs a wallop with her trusty wrench melee skill.

While players are shooting and looting their way through the latest update of Relic Hunters Legend, they’ll be able to use the newly added “special weapons” which replace the weapon in a player’s loadout such as Raff’s Keytar. Players will also be able to now shoot multiple projectiles out of their guns with the same shot and revel in dozens of new skill effects and sounds. With the full party update, Relic Hunters can now team up with three of their friends to form a complete party of four to chase down sweet loot and the mysterious past-stealing villain.

Currently in alpha, Relic Hunters Legend is playable for Kickstarter backers and Founders on PC. To become a Founder visit the official site here. Relic Hunters fans can wishlist the game on Steam here.

About Rogue Snail
Known for hit titles such as Chroma Squad, Dungeonland and Relic Hunters Zero, Rogue Snail is an independent game studio based in Brazil. With more than 10 years of game industry experience, the studio aims to deliver high-quality gaming projects and remain transparent with their fans.