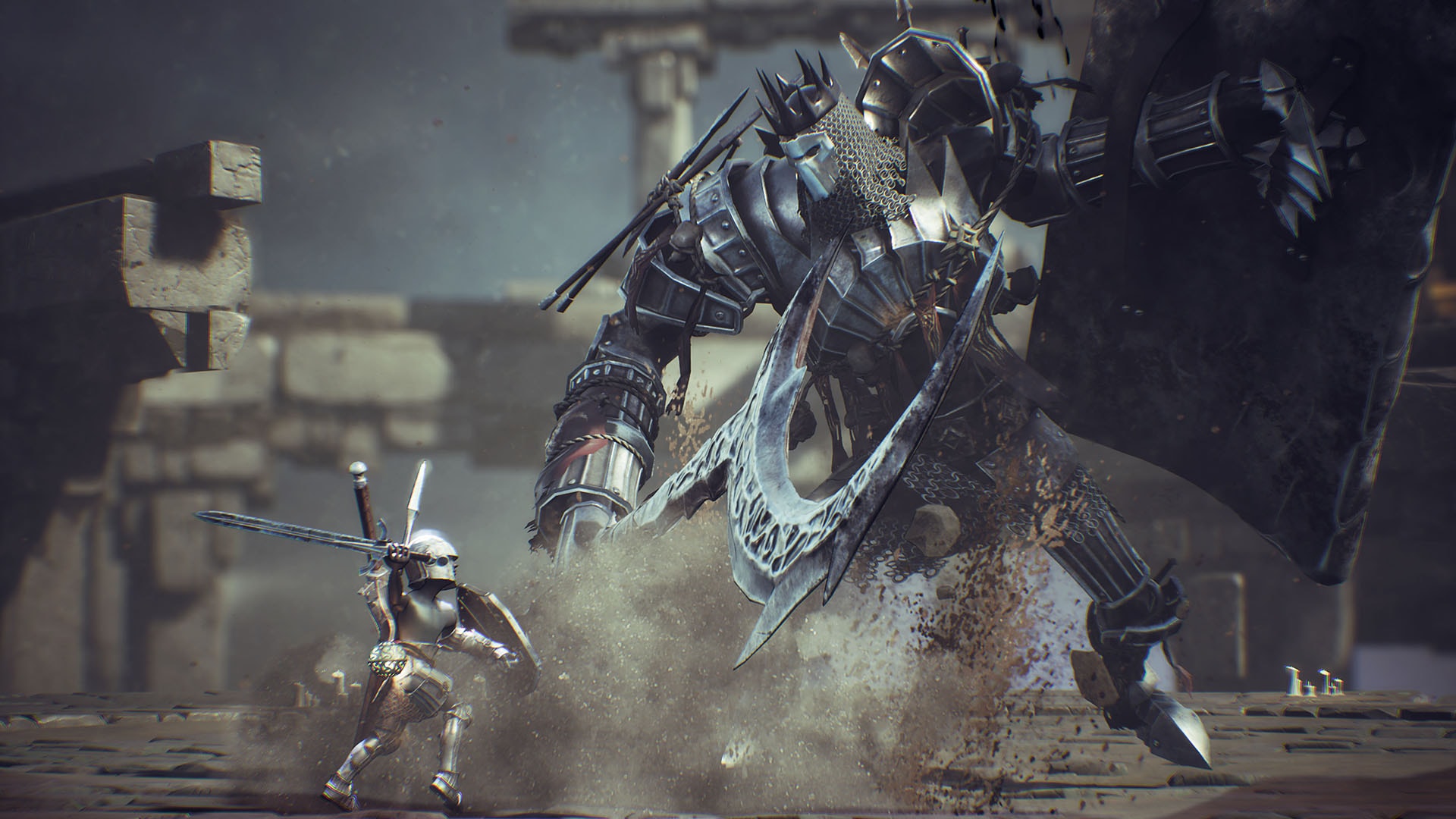 When anyone mentions the word souls or souls-like, my mind immediately tends to jump to those challenging but rewarding games that don’t hold the player’s hand and tell them to “git good” but there is a difference between getting good and being rewarded, and getting good for the idea of purely challenge or insanity. Sinner: Sacrifice for Redemption is an Indie souls-like title developed by Dark Star, later released by Another Indie. This indie-style souls-like game is known for the pure difficulty, alongside the power down system used to gain access to boss fights. 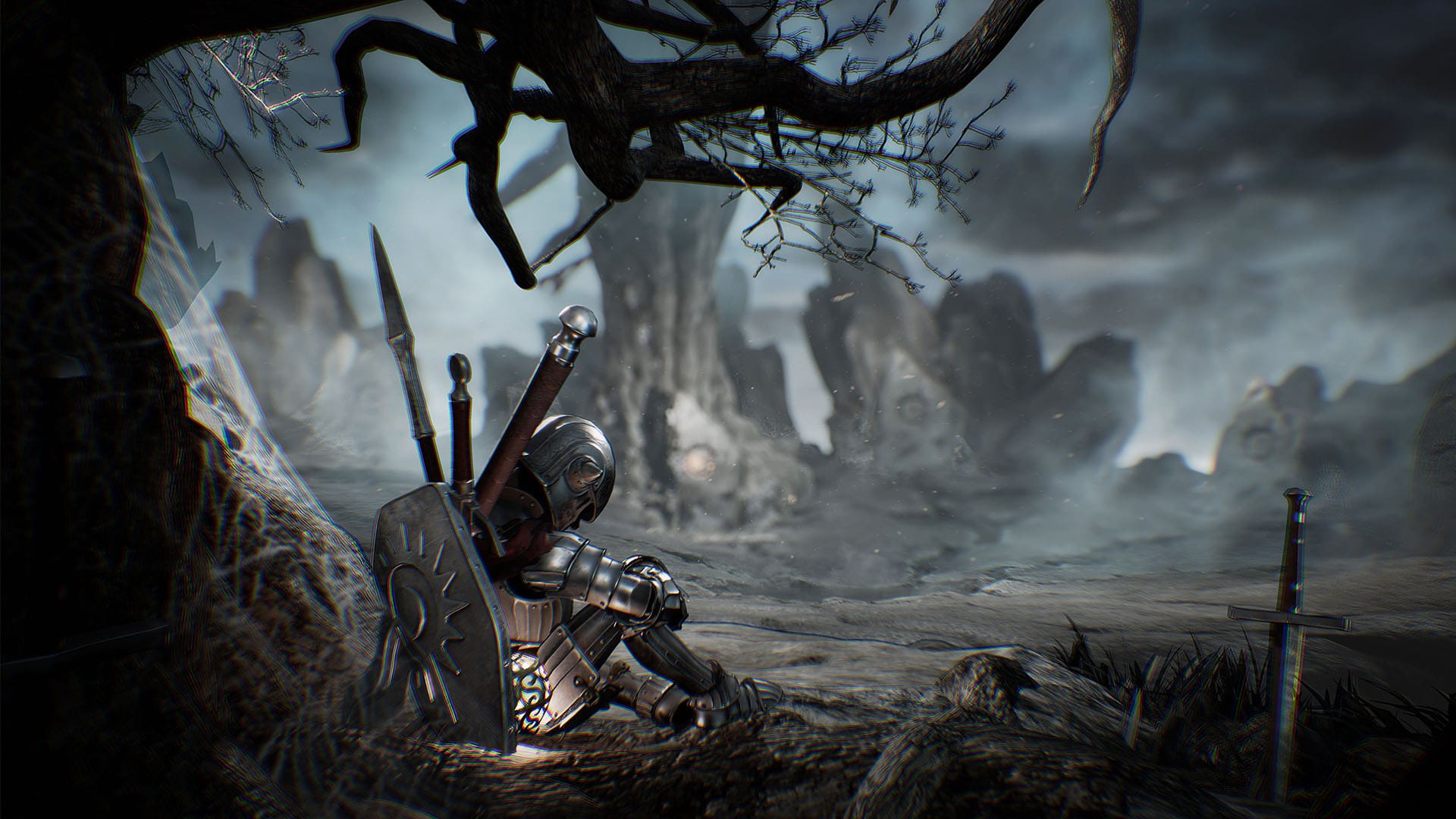 With a sword in hand, another on back, the story of Sinner: Sacrifice for Redemption is one of a simplistic nature that fall into this category of existing but with little impact to the player or game.
As the player, we follow Adam, a man with no memories of his past and a small number of sins riding his back as he makes sacrifices to atone for these sins in an attempt to get redemption for his forgotten past. If I can be honest, the story here is simple and to the point, leaving no room to the imagination except for what Adam could have done to get to this point of his life, which makes the story more or less a “here to exist and explain why we’re here” narrative.

Usually, here is where I would talk about what I felt took away from the story as a whole, but that is the thing I felt took away, the lack of a real narrative. Adam clearly did something in his past, be it far from his memories currently, to get to this point and I would love to see this expanded upon in more than just flashbacks here and there.

Standing toe to toe with the big baddies, Sinner: Sacrifice for Redemption‘s gameplay is where the game really shines through, as it plays on the idea of losing your powers to get the sought after redemption instead of the traditional empowerment. To start, I want to bring up Adam’s limited supply of weapons and equipment. Unlike most games in the souls-like genre, Adam does not gain anything from winning battles, instead of being forced to use your limited supply of healing items, side items, and weapons, this being a short sword and shield combo, alongside a bastard sword. 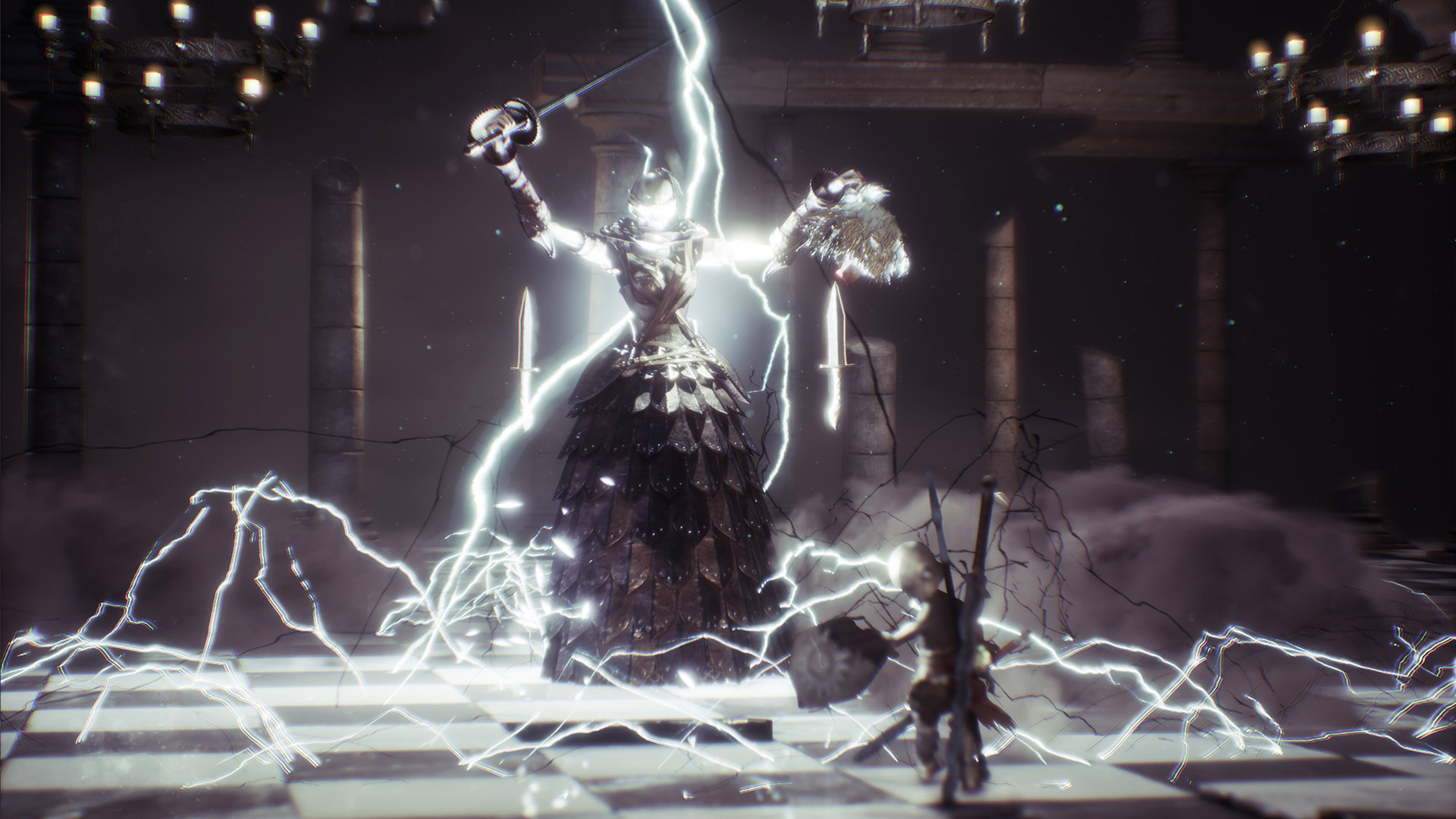 Adam’s supplies are not even safe though, as the game focuses on a level down system, where you sacrifice something in your set of tools to take on one of seven big baddies or sins, in the game. Should you beat the sin, that level down is locked in place, and if you want it back, you best be prepared for that sin to come back and fight it all over to get it back. This is the bread and butter of Sinner: Sacrifice for Redemption, the idea, and action of losing something to purify your soul.

Combat though is where the game takes a turn for the insane side, as each sin is designed to play off of something Adam did in his past life. Adam uses a slow, but a heavy-hitting bastard sword, alongside a much lighter but less damaging sword and shield that can be degraded in damage and durability as you give to fight the sins. With this in mind, the sin fights are more of a matter of failing to get good, with each boss being unique in pattern and abilities to master. The sin fights are the hardest part of this game by far, as using limited supplies forces the player to see how long they can last without healing when to use a damaging side item, etcetera. 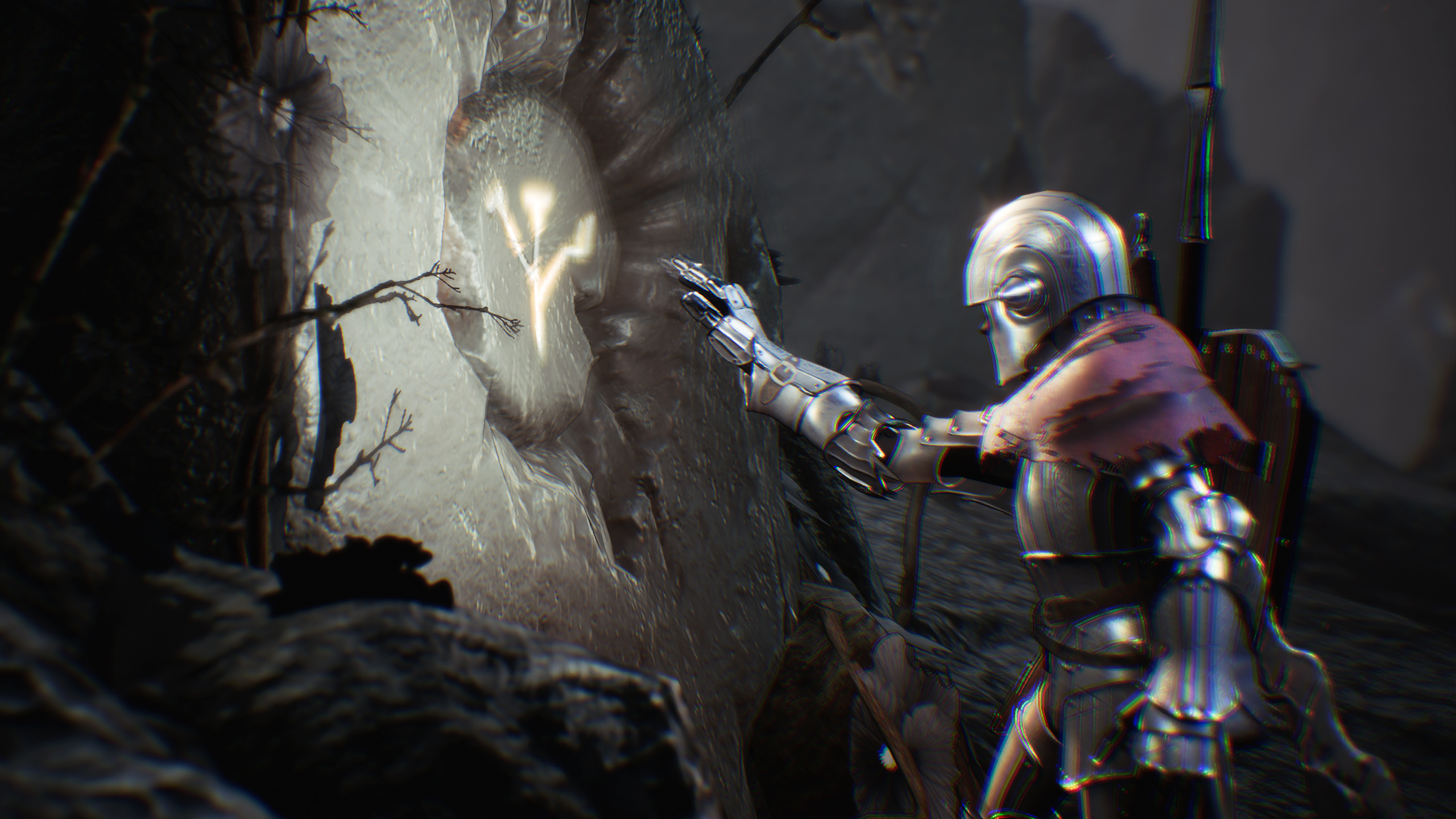 Most games are not without their share of gameplay issues, Sinner: Sacrifice for Redemption having some tough ones to overlook. Let us start with the pure challenge level of the game, which is borderline crazy. The concept of leveling down your power by cutting weapon damage, weakening your armor, lessening your inventory all make this game absurdly hard, especially for those not prepared. Following this is the no pausing in fights situation, which cranks the difficulty up another notch. When you enter combat with a Sin, you can “pause” to look at your commands, leave the field, that sort of thing but it won’t pause. This failure to pause can lead to some frustration as death is still a substantial possibility with certain sins if you are not careful.

Striving for a more unique look, Sinner: Sacrifice for Redemption‘s presentation leans more towards a realistic cartoon visual with a gothic flair. Visually, the realistic cartoon style was off-putting at first, but I found the use of the dark colors in all areas, with mostly greys, blacks and some tints of white or silver, to make this a nice medium for the dark and twisted world being presented. The characters follow this same style of design, with Adam and more humanoid sins like Chanel getting some more colors like reds and even pearl type colors, depending on the lighting your in. 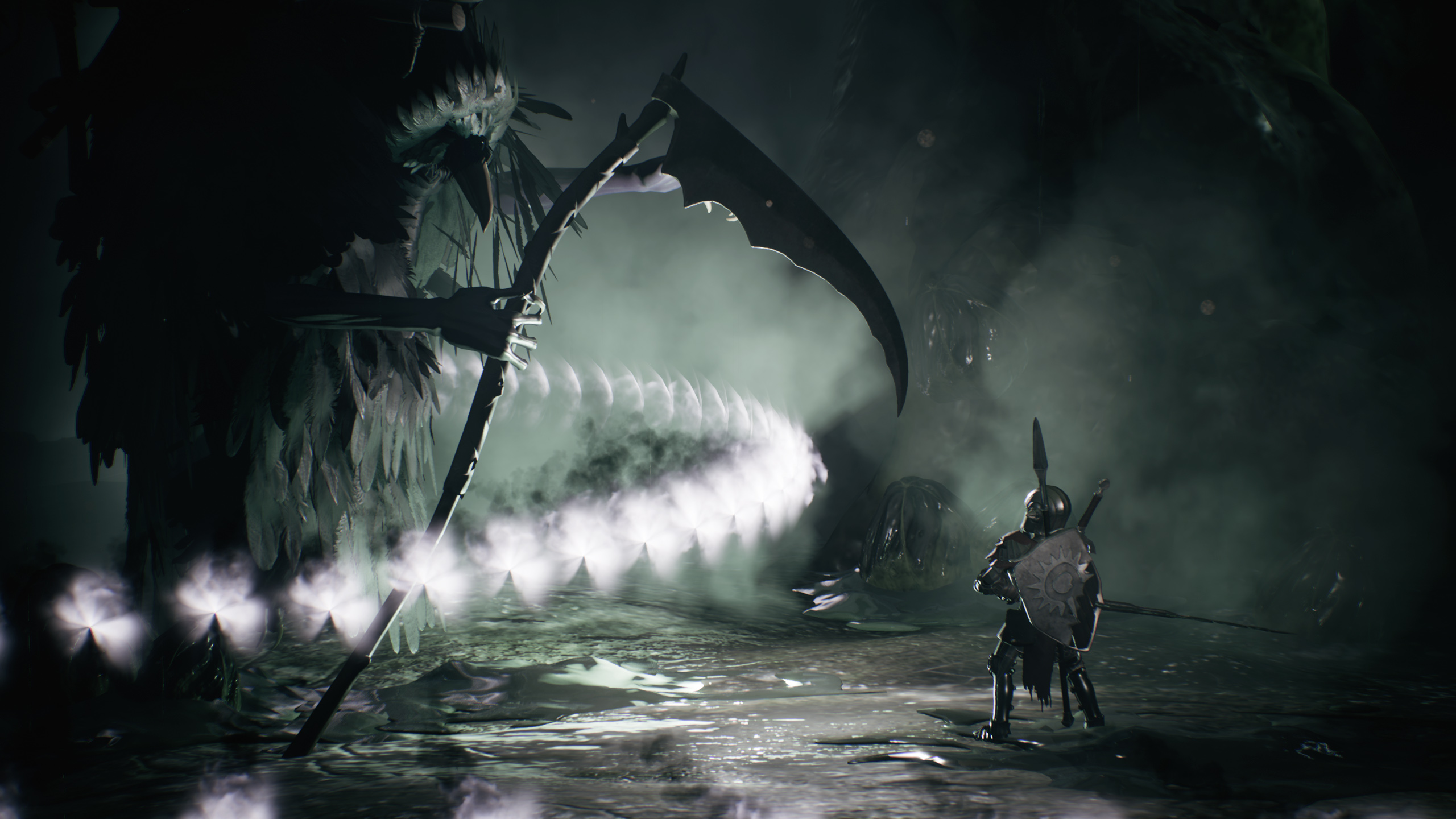 Get prepared for the cinematics as the soundtrack or push of one is creepy, chilling and often times quiet until it is time to strike. The music used in Sinner: Sacrifice for Redemption is one of the best parts of the game, as it uses instruments like the bell, harp, and even some chanting to help set the tone of the world and each fight. The sound effects separate this game from other similar titles, as they put a heavier focus using these to add to the score of the soundtrack, with hollow clashing, loud slams and even many variants of screams or muffling. 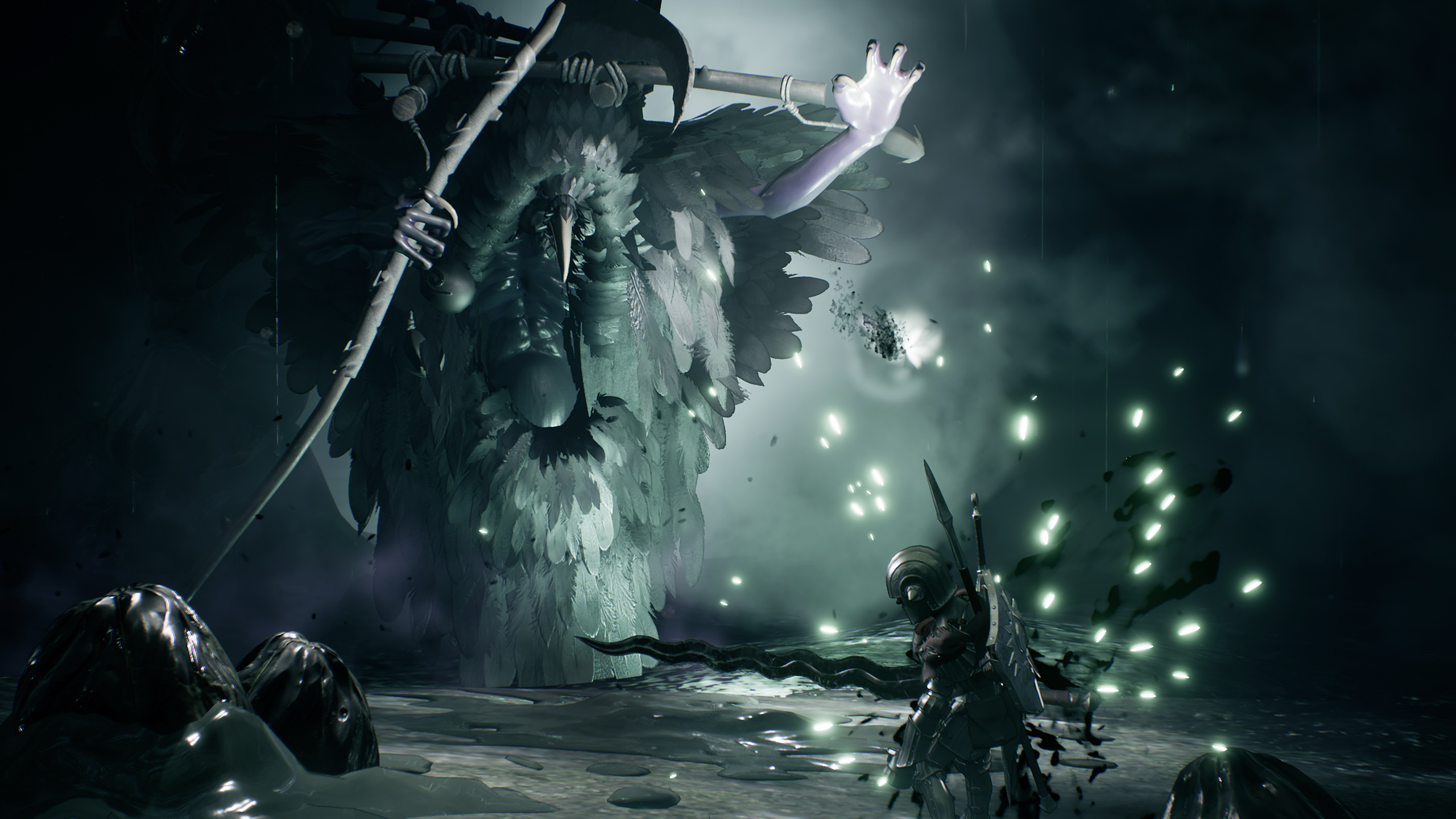 As the dust-filled air begins to settle, I find Sinner: Sacrifice for Redemption has several good points, with many of them being more double-edged swords of negative points as well. The simple but easy to follow story, use of a limited setup, tough bosses with heavy trades of loss to reach them, dark and gritty but realistic cartoonish graphics and ominous but dark soundtrack make for a game that while a good time on occasion, doesn’t hold up in the long run.

DarkLunarDude gives Sinner: Sacrifice for Redemption a Drastik Measure of 6.2 out of 10.0 (62)

For the price of $18.99 on the PlayStation Network, I can only recommend Sinner: Sacrifice for Redemption to those really seeking a tough and challenging souls-like title, as the difficulty will only get harder as you progress with the level down system.